Bigg Boss 15 Winner: Who Will Take Home The Trophy As Per Our Twitter Poll

Who has the highest chances to win the show this season among the most popular contestants of the show?

Bigg Boss grand finale is just around the corner. Shamita Shetty, Tejasswi Prakash, Karan Kundrra, Rakhi Sawant, Nishant Bhat, Rashami Desai, and Pratik Sehajpal have made it to the top finalists of the show.

Recently, Rakhi Sawant got evicted after she got the lowest score from the live audience inside the Bigg Boss house. She had entered the 15th season as a wild card contestant along with her husband Ritesh. Rakhi Sawant got emotional listening to the goodbye speech by Bigg Boss. Bigg Boss in the speech stated that the audience doesn't actually want her journey to end which is why they don't want her to win the show.

We are sure you are super excited to see who lifts the trophy this season. Prize money for the winner is not disclosed. The grand finale promos are already out and it is going to be a star-studded affair. The grand finale will air on the 29th and 30th January at 8 pm.

Ahead of the grand finale, we did a quick poll on our Twitter handle and asked our readers to share who they think deserves to win the trophy this season among the most talked about contestants on the show. Read on to see the results. 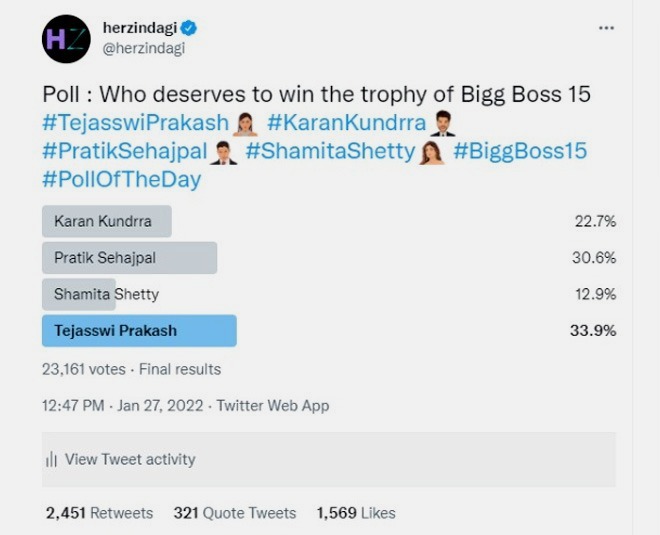 According to our poll on Twitter, Tejasswi Prakash has the highest chance to win the trophy of Bigg Boss 15 as per our readers. Next on the list is Pratik Sehajpal, followed by Karan Kundrra. Shamita Shetty, as per the poll has the least chance to win Bigg Boss 15 trophy. 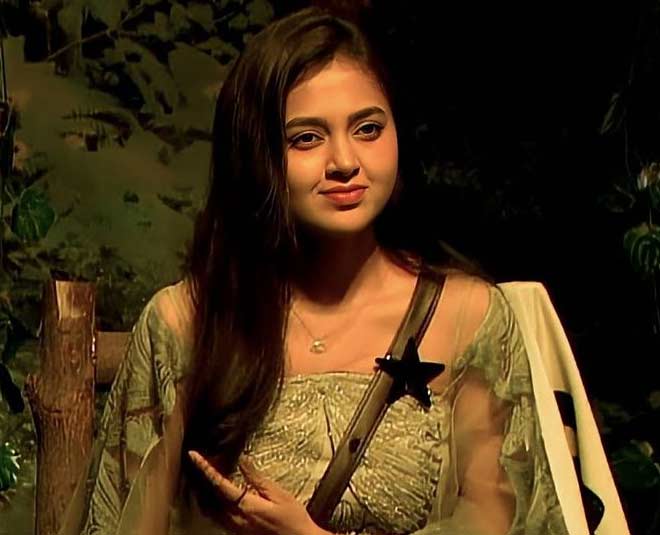 One of the most talked about contestants on the show, Tejasswi Prakash managed to keep us hooked through the season. Through the telly actor's stint on Bigg Boss 15, we saw a lot of ups and downs. Her lovey-dovey moments with boyfriend Karan Kundrra, ugly spats with Shamita Shetty were some of the highlights this season. Love School fame Pratik Sehajpal was a part of Bigg Boss' digital edition. Though he failed to win Bigg Boss OTT, he won many hearts with his game which is why he was probably asked to come back again with Bigg Boss 15.

His game on Bigg Boss 15 always came out to be very clean and clear. He never shied away from sharing his opinions, he didn't get into ugly fights and never interfered in fights. Pratik Sehajpal's connection with Nishant Bhat was loved by all. The two always stood for each other through the game. Karan Kundrra has been a strong contestant of Bigg Boss 15 ever since the very beginning. He was always seen playing independently inside the Bigg Boss house. He never let his relationship with Tejasswi Prakash affect his game and always took his own decisions.

Also, let's not forget that the actor enjoys a huge fanbase. Karan Kundrra has been a part of the industry for the longest time and has many fans all across the globe.

Don't Miss: Couples Who Fell In Love Inside The Bigg Boss House

Another contestant who has always been in the spotlight on the show is Shamita Shetty. During her stint on the show, we got to see her many sides, her strong, opinionated side, her emotionally vulnerable side, and her sweet supportive side too.

In terms of her game, she was always seen focused on her goals. Many viewers have felt that she is someone who has leadership qualities and deserves to win the show.

Tell us who do you think will win Bigg Boss 15 this season and why on our Facebook page. Stay tuned for more updates on stories around Bigg Boss 15.