Watch 6-year-old, Teresa Manimala asking some mature questions from her mother while reading a biography.

Can you imagine a 6-year-old girl questioning sexism, gender disparity? These are big words for someone as young as six-year-old, No? Children are always curious, they have a million of questions about just everything.

Sometimes their questions are so mature and correct that they leave us transfixed. Teresa Minamala's question from her mother Sonia John was one such. In a video, when she called out sexism, she became a viral celebrity over the internet. 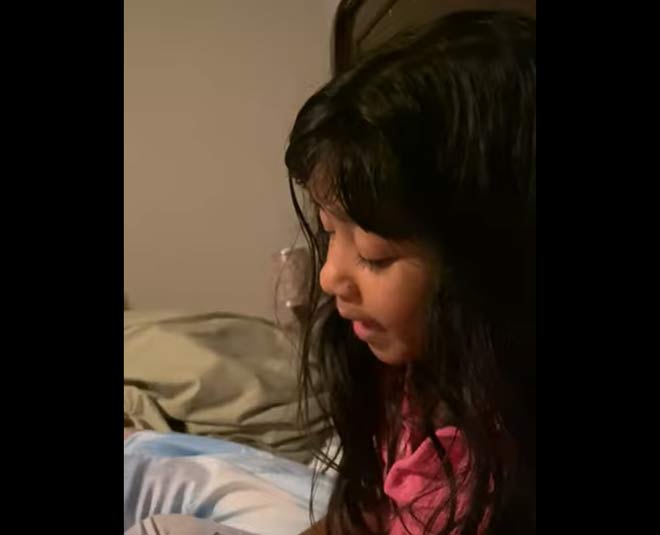 In the video, the little one can be seen asking her mother about the gender inequality in books. She was reading a biography of Abraham Lincoln which was meant for children. The video was from the family's regular bedtime routine. She can be seen asking her mother, Sonia John why the books mention 'man-made' and not use gender-neutral terms like 'people-made' or 'human-made'.

She can seen making questions like 'Aren't women making Eiffel Tower or something', 'Aren't women allowed to build'. To these questions, her mother can be heard saying that the word man implies to women also. To her mother's answer, she replies, “It’s not nice, right?”

Teresa Manimala's Mother On Her Daughter Calling Out Gender Inequality

In an interview, Sonia John, who works as an Associate Professor at the Oklahoma State University said, “I am not surprised that she asked these questions and I am happy that she has begun asking these questions. I hope she has that same attitude when she grows up.”

“I used to read to her, but for the last two years, she has been reading much of it herself. I got her a couple of books written by Sudha Murthy that she enjoyed reading,” she shared further.

Sonia John shared her daughter's video on Twitter and WhatsApp and gamily groups which was later shared by celebrities.

Will The Little Girl's Video Bring About Change?

Yes, that's the question. Will changing 'man-made' to 'human-made' or 'people-made' really bring about change? Will equality be served? The roots of patriarchy are quite deep in the country and just another video can't transform things for real.

Yes, the young girl's video has started a conversation again but where will we land?

When the video first went viral on social media, it left the netizens divided. While some praised the little one for questioning the patriarchal culture, others felt the 6-year-old was being used as a promotional gimmick and it was all scripted.

A user wrote, "I am so proud of this little girl and her mother 🙌 this is what woman in our society should question, why? Why man made? Why Mankind? Why Chairman? It’s high time children are taught not to sexist, boy to be taught the concept of equality and woman finally having a say in the society and their lives!!!!! #proudfeminist💪💪💪."

Many other users suggested changing the whole vocabulary and trolled the thought behind the video. However, many came out in support. A user wrote, "People in the comment section are like why it is mother earth and not father earth🤦‍♀️... the point that girl is trying to make is that why we don't use gender neutral words?? Rather than saying mankind why can't we say humanity."

Some netizens felt that the video was scripted. "This is ridiculous, I highly doubt the child came up with that on her own. People really be using their kids for their on insecurities. Secondly, ‘man’ in man-made is not referring to a specific gender here, it conceptualizes all of humanity in one term. Similarly, how feminism isn’t just fighting for the equality of women but also for men. It’s just so ridiculous how far people are willing to go. Weaponizing their kids for their own political motifs that are inherently flawed and lack logic," wrote a user."

Sexism, gender disparity were never just adult topics and never will be because it all starts to get ingrained in our minds from a very young age. While some question, others don't. With kids like Teresa asking some sensible questions like these at this young age, the future looks bright.