Vaishno Devi Temple Vaishno Devi is one of the most popular and revered Hindu religious shrines in India. But did you know these facts about the temple? Vaishno Devi Temple Vaishno Devi is one of the most popular and revered Hindu religious shrines in India. Set in the Trikuta Hills in Jammu, Vaishno Devi is visited by millions of people every year. But it is during the Navratras that many people throng this shrine. It is believed that Mata Vaishno Devi observed a nine-day fast ‘Navratra’ while praying for the victory of Lord Rama against Ravana. Maa Vaishno is said to be the manifestation of Maa Shakti. People have this belief that Maa Vaishno fulfills every wish that comes from a pure soul and true heart. The temple is situated at an altitude of 5200 feet and you to reach, you need to trek, around 12 km from Katra.

If Travelling For The First Time

1. As you begin your journey from your base camp in Katra, you get an option to take a horse ride up Adhkwari, which is halfway to the temple. Enjoy the views of the valleys around. Vaishno Devi is an altogether different world where it doesn’t really get awkward while you are talking to strangers. In a while, you will find yourself chanting “Jai Mata Di” continually. That is the vibe of the place! Especially during Navratras, the entire trek route is beautifully decorated with flowers and you will get the Navratre vibes for real. 2. You are not allowed to carry cameras, phones, leather goods inside the temple, you need to keep them in the cloakrooms maintained by Vaishno Devi Shrine Board.

3. Navratras are the most crowded days at Vaishno Devi Temple. If you are someone who can’t travel in so much rush, don’t go during this time.

4. You can’t begin your Yatra to Vaishno Devi Temple without your Yatra registration slip, make sure you buy it at the counter at Katra. To save yourself from the long queue, get your registration done online. Keep the slip safe with you till you complete your journey.

5. Battery operated rickshaws are available for senior citizens during daytime for their Darshan. Helicopter service is also available but make sure you get your tickets booked way before because it is not easy to get these tickets. 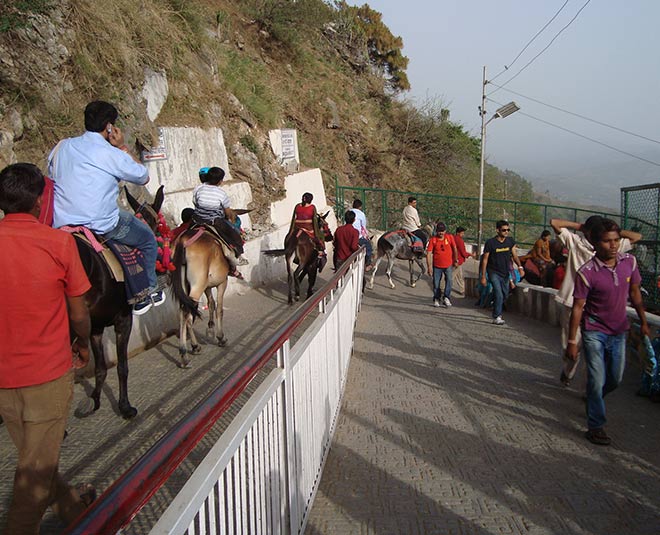 6. There are accommodation options available at the Bhawan (main shrine). However, they are mostly full. Make your reservations beforehand to save yourself from last minute bookings.

READ MORE: Do You Know Travelling Has These Health Benefits?

Interesting Facts You May Not Know