Covid 19 Wedding Shenanigans: These Viral Videos Are Going To Make Your Jaw Drop

Amidst the pandemic, there are many quirky wedding viral videos that are doing the rounds on the internet. Read on to know about them. 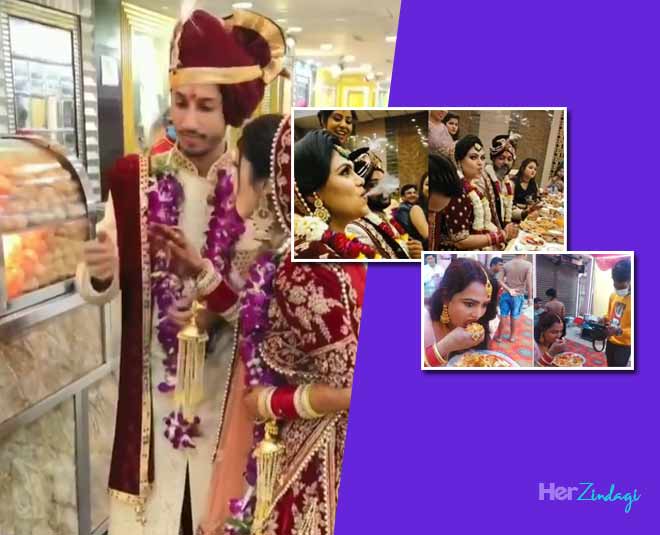 Indian marriages are all about coming together of two big families, and a grand celebration. These weddings are often filled with fun and interesting ceremonies which compel you to laugh and forget everything else. However, with the outbreak of novel coronavirus, there were a few dull moments, but now it seems that the Indian marriage celebrations and ceremonies are back in full swing. With the easing of Covid-19 lockdown restrictions, a lot of funny and quirky viral videos are breaking the internet. Let’s have a look at them.

Bride Having A Puff

In a viral video, a bride can be seen enjoying and puffing out smoke in front of the guests, present at the wedding. While the groom sitting next to her could be seen smiling and enjoying the dinner along with other family members. Although the bride is happily making rings out of the smoke there is no cigarette spotted in the video. At one point, a person can be seen feeding the bride a dish with the help of a spoon and the dish is all smoked up.

Take a look at the viral video Here:

In another Instagram viral video, a newlywed couple could be seen standing next to a golgappa stall at their wedding. And the groom could be seen feeling her wife golgappas with his hands. The video has garnered all sorts of praises and love from the viewers. After which they could be seen discussing something amongst themselves which is too adorable to watch. The video has been shared by an account with the name arushi_rajput_08 with a quirky caption that read “Shadi apni jagah...Golgappe apni jagah,” caption read. So far, the video has been watched by more than 2 million people and has been shared on other social media platforms as well.

Have A Look At The Video Here:

In this video, a bride decked up in the wedding attire reached on the stage to find out her place being occupied by the groom’s friends. However, what happened next is something they wouldn’t have imagined. After refusing to not vacate the place by the groom’s friends, left the bride a bit annoyed but she decided to not give up and sat on the lap of the groom.  The video immediately went viral and bagged views in lakhs and many parsing comments.

In another funny video, a woman can be seen enjoying a plate full of various dishes and is about to have the food with her hands. But, suddenly the video zooms in a wide frame and we see a cameraman standing next to her. By finding out the cameraperson capturing her, the woman quickly switches to spoon for eating her food.

Take a look at the video:

If you liked this article please share your views on our official page. Stay tuned to herzindagi for more such stories.