As Navratri is near, here is a list of famous Durga Temples in India that you must visit.

Navratri is just around the corner and we are all extremely excited for 9 days filled with joy and happiness. This 9 days long festival is not only filled with festivities but also, has a positive vibe due to the presence of Goddess Durga around us.

To take the blessings of Goddess Durga, you can visit these Durga temples in India. One of the most holy temples and most visited temples in India is Vaishno Devi temple in Katra. A large number of Hindu devotees visit Vaishno Devi from across the globe. Situated in katra district of Jammu & Kashmir, this temple is crowded all around the year but especially during the Navratri week.

It is believed that Goddess Durga resides here inside the cave in the form of rocks. It is a 13 km uphill trek from Katra.

Situated in Bilaspur, Himachal Pradesh, Naina Devi temple is yet another temple in India that you must visit during Navratri. According to the legend, it is said that when Sati jumped in the Yagna, Lord Shiva was enraged and alarmed all the gods by performing Tandava. Vishnu released a Chakra that went and cut Sati’s body into 51 parts and scattered all the parts.

Naina Devi is the place where Sati’s eyes fell and people came from across the globe to visit this temple.

According to Hindu mythology, the temple is built on the spot where Sati’s right foot fell. Situated in the north-eastern state of Tripura, this temple sees a large number of devotees every year who have come at this place to worship Goddess Durga who is present in the form of Soroshi.

Don't Miss: Gudi Padwa 2022: History And Significance Behind The Celebration Of The Festival

You just read about the story of Sati and how her body parts feel in different places. Sati’s eyes fell and Naina Devi temple was situated. At this temple, Sati’s breasts fell. This temple is of high religious importance to the Hindus and several pilgrims visit the temple all year round, especial;ly during the festival of Navratri as the festival is celebrated in a grand manner. 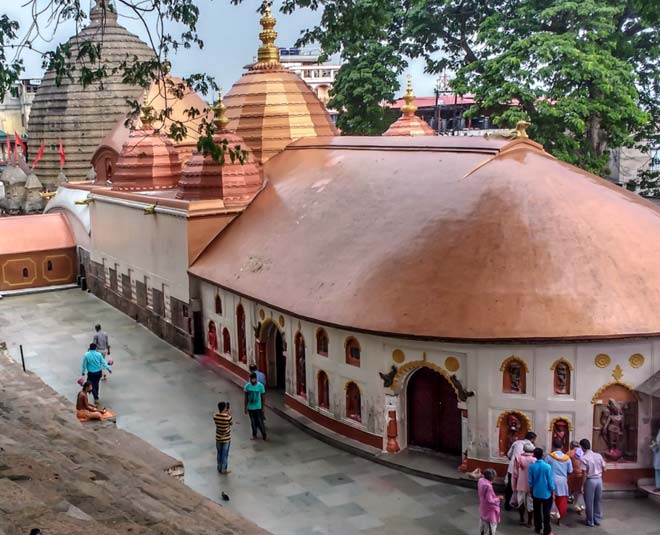 Situated in Guwahati at Nilachal Hills, Kamkhya temple celebrates Navratri in a grand manner. It is also said to be one of the oldest temples and has at least 10 deities within the complex. Apart from celebrating Navratri and Durga Puja in a grand way, Ambubachi Mela is also observed at this place. This is the time when menstruation of the Goddess is observed. This temple should be surely visited during Navratri to see the place in a whole different light.

Don't Miss: Significance Of Kaleere In A Punjabi Wedding

Aforementioned, Sati’s body parts fell in different places after she jumped in the Yagya. This temple is built on the place where Sati’s left hand fell. The statue of Meenakshi is carved in black stone and you should definitely visit this temple during the festival of Navratri.