This Young Girl From Kerala Has Left The CJI Pleasantly Surprised With Her Letter Of Gratitude.

The Chief Justice of India responds to the gratitude letter sent by a class 5 student from Kerala, Lidwina Joseph. 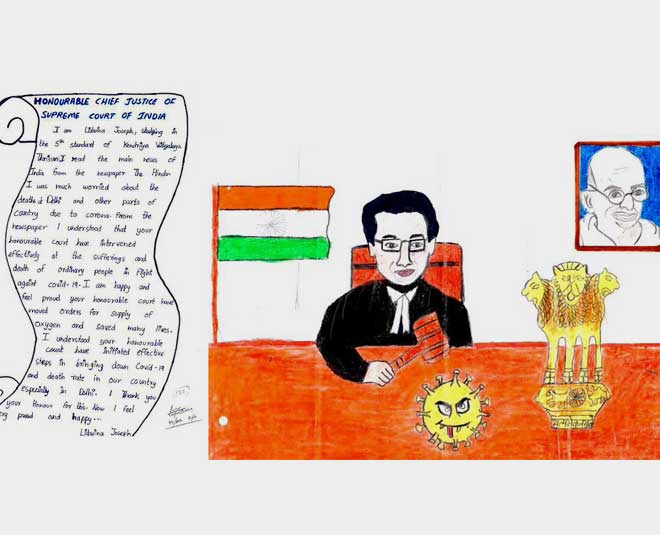 Lidwina Joseph, A student of class 5 in Kendriya Vidyalaya from Thrissur district in Kerala wrote a letter to the Chief Justice of India, NV Ramana. The letter read that she was “happy and proud” of the initiatives taken by the Supreme court to deal with the oxygen crisis in India and the pandemic as a whole.

Lidwina started her letter by acknowledging the effective intervention of the supreme court to help the ordinary people battle COVID-19. She stated that she had read about the role of the Supreme Court during the pandemic in the newspaper and felt very happy and proud. She also made a special mention to Delhi and how the Supreme Court took measures to avert the extreme crisis and reduced the death rate in the entire country, especially in Delhi. She ended her letter by saying, “I Thank you your honor for this. Now I feel very proud and happy..” Along with the letter, she also attached a drawing made by her which depicted the Chief Justice of India, sitting in his office with a gavel in his hand. With this gavel, he is seen hitting the corona virus. Behind him is the Indian flag in all its glory and a paining of Mahatma Gandhi.

Don't Miss: The 'Oldest Woman On The Planet' From J&K Gets Her First Covid Jab

To this, the Chief Justice of India, NV Ramana wrote in his reply that, “I am really impressed with the way you kept track of happenings in the country”. He added to it by appreciating the concern that she has shown amidst the pandemic. He assured that she will grow up to be an “informed, alert and responsible citizen”. In the end, he gave her his blessings, best wishes and hoped for her all-round success. Along with the letter, he also sent a signed copy of the Indian constitution to her. It is a matter of great pride that such a young girl of our country is already indulging herself in staying informed about the condition of the country especially in these difficult times. At a time where even the adults have been avoiding news to relieve themselves from the collective grief that the nation is trying to overcome, this young girl does not seem to shy away from the reality. At an age where children indulge in fiction and cartoon, Lidwina is indulging in newspapers and forming opinions. Not only did she have an opinion but she also deemed it necessary to share it with the concerned authority. 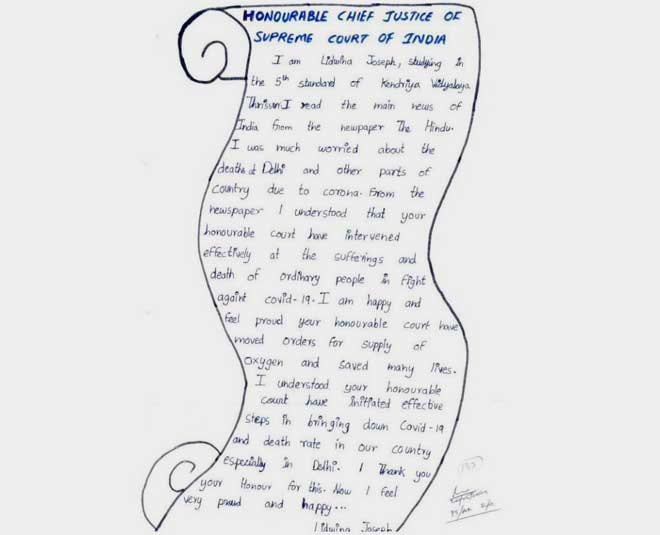 In tough times like these, positive news like this gives us hope and brings a smile on our faces. The capacity of young minds to look at the positive side and count their blessings when it is extremely convenient to play a blame game is extremely inspirational.

This gives us a sense of relief that the future of our country lies in the hands of these aware, alert, woke and responsible citizens. Stay Tuned to Her Zindagi for more such inspiring articles!