Urfi Javed loves experimenting with her outfits, which are often referred to as "bizarre."

Urfi Javed is well- known for her quirky sense of fashion. From taking inspiration from Hollywood celebrities to experimenting with anything, such as wires or flowers, she never shies away from flaunting her creative style. But her fashion ideas often make her the target of trolling, both online and offline. This, however, never stops the confident actress from showing off her unusual fashion. She also knows the sassiest ways to respond to trolls. Here are the 7 times when the actress gave befitting replies to trolls.

In an interview with hauterrfly.com, Urfi mentioned that people, especially men, often comment about her breast size  To this, Uorfi replied "these trolls are not going to get a chance to suck on them anyway, so they should mind their f***ing business." She added, "half of the men who talk about women’s breasts size have small penises but we don’t publicly shame them for it as they do."

Farah Khan, sister of Sussanne Khan once took to the comment section of a paparazzi's post and wrote, "Sorry to say but this young girl needs to be reprimanded for distasteful dressing. People are making fun of her and she thinks they like the way she dresses. Wish someone would tell her (sic)."

In response, Urfi shared a note  on her Instagram story and she wrote, "@farahkhanali Ma'am, what exactly is 'tasteful' dressing? Please define it for me. Also I know U people don't like the way I dress, I'm not living in a bubble but also I don't care about people's opinions. You wear something that has a designer tag to it, so it's tasteful? Your relatives have starred and produced movies where women have worn tiniieee tiny clothes in item numbers. Really that's tasteful! And Sexualising a woman's body for an item number, that's acceptable? Charity begins at home. Peace out! This was really unnecessary on your part, Star kids wearing whatever they want is tasteful. Of course (sic)."

In another story, she added, "You Spoke about how people don't like my dressing sense so I should change it. Wow, people have a lot to say about your family. Does your family listen to them and change? Star kids get trolled Too for their dressing sense, you would tell them too to change their style? Telling me to change cause the world doesn't like me is so 80's. Kal ko people will tell your kids that they don't like their face so they should change it? What logic. This is what you will teach your daughter? People don't like you, please change yourself! So not expecting this from a lady like you! You subtly slut shamed me. I don't see you giving the same advice to star kids out there publicly (sic)."

She also made an instagram reel in order to give an answer to Farah Khan Ali:

Urfi Javed is often spotted at the airport. So some people ask the Bigg Boss fame content creator: 'Tum roz roz airport kyun jaati ho?' (Why do you go to the airport everyday?.

(I will walk, dance, sing, play, go out, go alone, go with someone else, why do you care?)

4. Trolls Wishing Her To Be Dead

After the death of Punjabi singer Sidhu Moose Wala, trolls took to the comment section of her pictures and wrote hateful comments asking her to die. Urfi Javed shared the screenshot of such comments and wrote that "Just pointing out a few of the comments which I've received in the past few days! People wishing I died, get shot by. We live in a cruel world but let me tell you guys something, you guys need to pray harder for me coz guess what this b*itch's here to stay!". 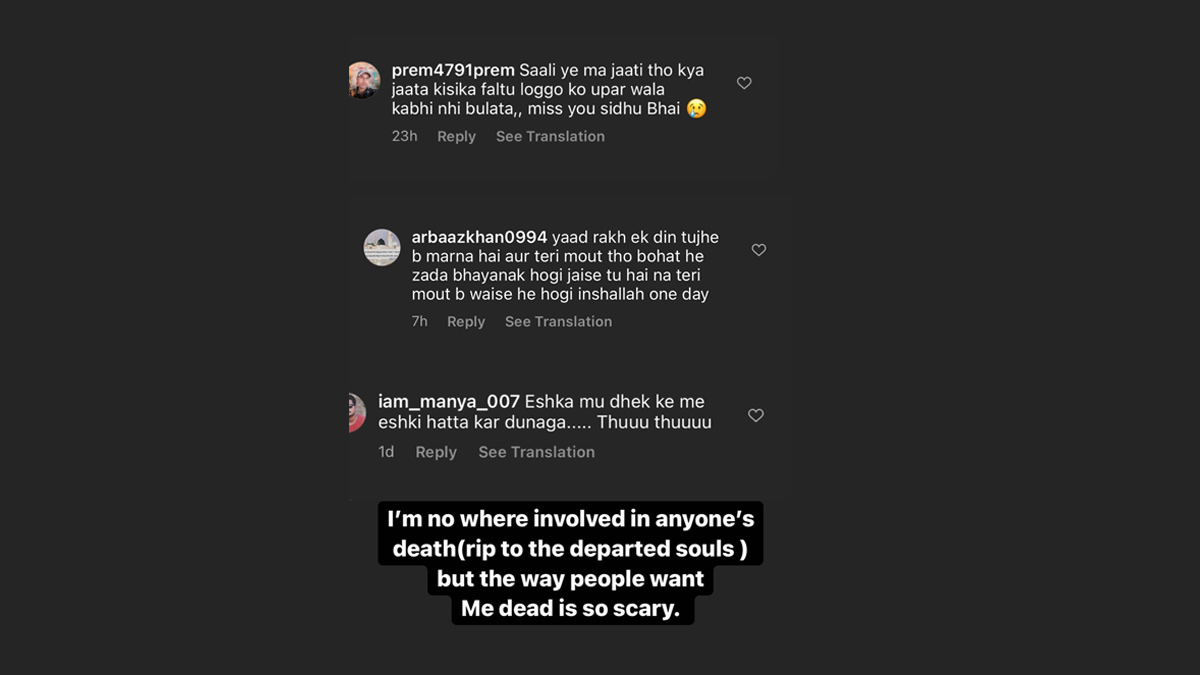 5. Using Religion To Shame Her

Trolls often use Uorfi Javed's religion to shame her. In an exclusive interview with Hauterrly, Urfi Javed clarified that she has no intentions of becoming a “Muslim clerk" and that she has no believe in religions. "Maine theka nahi le rakha Islam ka," she continued.

When the show's host questioned her about whether she had ever been asked to wear a burkha. She replied, "Yes, when I was a child". She later added that “I have a good set of boobs and I do not want to cover them”.

Urfi Javed is one gutsy woman. Although some may find her fashion sense odd, no one has the right to judge or degrade her for the clothes she chooses to wear.