Rajkot bride prioritises education over her wedding, writes examination as husband-to-be waits outside. 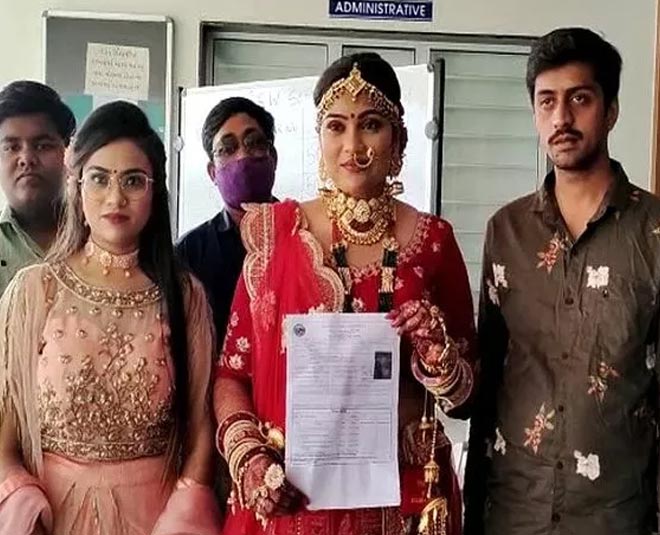 Women today are breaking barriers, challenging stereotypes everyday. Each day we hear of stories of women setting new rules, breaking norms and honestly, it is inspiring! Women are prioritising their own life, education, freedom more than ever today and setting an example for many.

Recently, a bride-to-be gave her university examination in her bridal attire ahead of her wedding and left many inspired.

A video of a bride writing her giving her examination, dressed in bridal attire is going viral on social media. The video shows a woman dressed up as a bride, wearing a lehenga and jewellery writing her exam with other students in an exam hall.

This woman from Rajkot, Gujarat is Shivangi Bagthariya who is an undergraduate student. She gave her examination at Shanti Niketan College. She is currently studying Bachelor of Social Work and gave her exam for the fifth semester.

When Her Wedding Muhurat And Exam Date Clashed

Shivangi Bagthariya's wedding date and examination date clashed which is why she had to head for her exam before her wedding. In an interview as per a report by scoopwhoop, she said, "When the date of my marriage was finalized, the examination schedule wasn’t declared. As luck would have it, the date as well as the morning muhurat of marriage clashed with my examination." She added, "Education is a must for all, including women. Parents and girls should give importance to education." Shivani arrived at the examination hall with her husband-to-be. As per reports, both the families supported her decision.

As soon as Shivani's video went viral on social media, netizens begin to share and comment on it. While many praised her for taking such a step, others spewed a lot of hate on the video and called it fake and scripted. 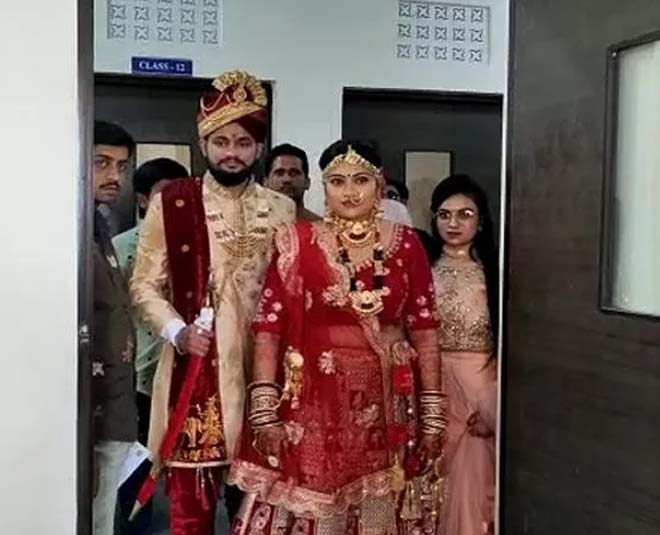 A user wrote, "People who are saying bridal make up exam ke baad bhi ho sakta tha… I have question for them. Are you in her shoes at the moment.. what if right after completing exam she have to perform a wedding rituals. Or travel somewhere far for the wedding rituals and she doesn’t have time to get ready!!!

Stop judging each and everyone!! Appreciate how she is giving importance to her education… I bet many of you who are already judging her.. might have not been really good in their education."

Many even questioned who made the video of students giving their exam in the hall and if it was allowed. "Examination hall me camera kaise allow tha 🤔," asked an Instagram user.

Don't Miss: Food Before Dude! Watch A Bride Get Ready Before Her Bridal Entry Going Viral

Well, Shivani is not the first woman to have prioritised her education over her wedding. Many other Indian women from differnet parts of the country have made headlines earlier for giving importance to their education more than anything else. Earlier, a story from Rajasthan went viral where a woman made her husband wait outside the examination hall as she wrote her final year's exam at college. Sunita Chaudhary got married on 28th April, the same day she had her final year's exam. She didn't want to miss it so discussed with her husband. Her husband Subhash understood how important exams were for Sunita and advised her to write her exam right after the wedding.

Another woman, Santosh Prajapat from Rajasthan convinced her family to postpone the bidaai ceremony after the wedding because she had to give her BA examination. (When Nagpur bride called off wedding)

Kerala native, Rahna reached the examinatin hall right after getting married early in the morning. She reached the exam hall with her husband and wrote her Bed examination on her wedding day.

Another bride from Madikeri reached the exam hall from her marriage hall to write her competitive exam. Swathi, resident of Ashokapura, had her wedding date coincided with her exam date. Swathi had been preparing for this competitive exam for a long time so she didn't want to miss it. The marriage rituals were thus performed quickly so that she can reach the exam hall on time. (22-year-old bride walks out of wedding after groom)

Coming back to Shivani Bagthariya's decision to prioritise her examination over wedding, it is indeed inspiring! Don't you think? Share your thoughts with us on our Facebook page. For more such trending stories, stay tuned!