A woman cop from Chennai carried an unconscious man on her shoulders amid the Chennai floods while ensuring his quick evacuation.

A woman cop from Chennai carried an unconscious man on her shoulders amid the Chennai floods and ensured his quick evacuation, marking yet another day of women impressing us all. This is a powerful example of duty, empathy, and a city coming together.

The Video Of The Incident

#WATCH | Chennai, Tamil Nadu: TP Chatram Police Station's Inspector Rajeshwari carries an unconscious man, on her shoulders, to an autorickshaw in a bid to rush him to a nearby hospital.

Chennai is facing waterlogging due to incessant rainfall here.

The video of this situation was tweeted by news agency ANI. The video begins with Ms Rajeswari, a woman cop, overseeing rescue efforts in the waterlogged Kilpauk cemetery. Ms Rajeswari with her trousers rolled up, is seen tugging at the branches of a tree felled by heavy winds along with her rescue team. The video then cuts to an unconscious man lying by the side of the road. The woman police inspector put the man on her shoulders with the help of the rescue workers and started looking for a vehicle to take him to safety. She can be heard giving orders to her juniors to cover the unconscious man and rush him to the hospital. She can be heard shouting erumai, which means 'buffalo' in Tamil -- to one of the men, while asking him to move faster.

After spotting a three wheeler auto, she puts the man in the back seat and gives some instructions to the rescue workers accompanying her. She goes on with telling the driver that he must ensure that the man survives. The policewoman returns to her duty of clearing the area in the rough weather as the vehicle drives away.

The Video Is Doing Rounds On Social Media

As the visuals of Inspector Rajeshwari carrying the sick man over her shoulders and rushing him towards safety went viral, it received love and salute from everyone and took the social media by storm while we all shouted, "Yass Queen!"

The ANI quoted the super cop Rajeshwari after the brave video went viral,

I gave first aid after which I carried him. An auto came there, we sent him to hospital. I visited the hospital, his mother was there. I assured them to not worry&that Police dept will support them. Doctor said that treatment is on & there's nothing to worry: Inspector Rajeshwari pic.twitter.com/0SsTuWeMCG

"I gave first aid after which I carried him. An auto came there, we sent him to hospital. I visited the hospital, his mother was there. I assured them to not worry and that the police department will support them. Doctor said that treatment is on and there’s nothing to worry about."

How Did The Unconscious Man Reach There? 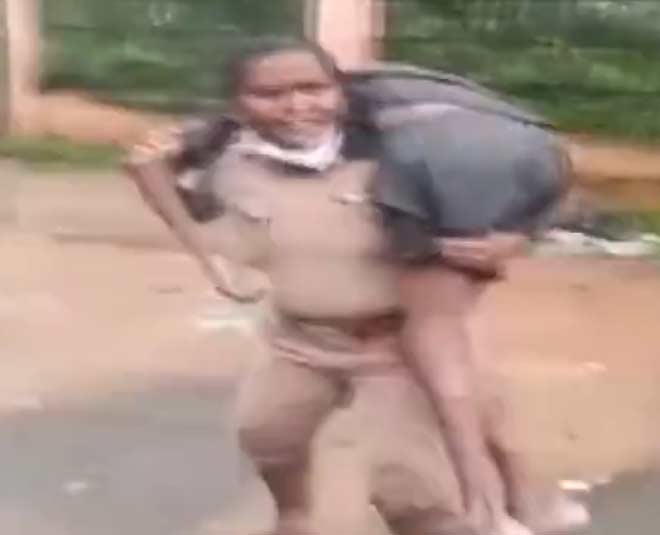 The 28 year old man was sick and had fallen off at the cemetery in TP Chatram which was witnessing excessive waterlogging and a clutter of uprooted trees. A tree had fallen on him during the excessive rain that flooded Chennai. He is currently under treatment and recovering well.

Who Is Super Cop Rajeshwari?

The selfless inspector Rajeshwari is employed with the TP Chatram Police Station. She received much love and salutes from a lot of people including Government officers, cops, journalists and activists.

IAS officer Supriya Sahu tweeted on the video, “No one has shoulders as strong as you Inspector Rajeshwari… Bravo. Helping out an unconscious man in terrible rains and rushing him to a nearby hospital in an auto is indeed laudable,”

“Well done, Inspector Rajeshwari. You do us all proud God bless you & all others like you performing selfless service in this hour of need.” IRS officer Nirupama Kotru wrote.

The Chennai Police Commissioner has also commended her for being “an excellent officer.”

Don't miss: Who Is Sunita Yadav? All You Need To Know About Internet's Latest Sensation

Such women deserve all the salutes and love.