Priyanka Chopra Shares Her Take On Rosie O’Donnell Apology, Asks The Comedian To Google Her Name

Global icon Priyanka Chopra was recently mistaken as author Deepak Chopra's daughter by a US comedian.

Priyanka Chopra is a global icon and she has proved it time and again. From being crowned as the Miss World 2000 to India to starring in multiple Indian films to making it to international cinema, she has always been on the top.

With her book 'Unfinished', Priyanka Chopra also turned an author. Last year, the diva also opened her Indian restaurant 'Sona' in NYC. All these achievements but the diva was recently mistaken as the daughter of American Author, Deepak Chopra.

It all started when US comedian Rosie O'Donnell had an encounter with Nick Jonas and Priyanka Chopra at Nobu restaurant in Malibu. The comedian took to her Tik Tok handle and shared the entire incident. In her video, she said that Nick Jonas was seated next to her with his wife, 'someone' Chopra which she always assumed was Deepak Chopra's daughter. She further told Nick Jonas that he was great in Kingdom and told Priyanka Chopra that she knows her dad. Watch the video here -

When Priyanka Chopra asked if she does, she said, 'Deepak'. Priyanka Chopra then cleared that he wasn't her dad and Chopra is a common name. The incident left her embarrassed and asked her audience if they too thought that Priyanka Chopra was Deepak Chopra's daughter.  The comedian was slammed by netizens for being rude to Priyanka Chopra.

Soon after calling Priyanka Chopra 'someone' Chopra, the US comedian made another video on her Tik Tok to apologise to her. In her video, she said that she mistakenly thought that she was Deepak Chopra's daughter and it was awkward. She further said that she is sure she is not the only one who thought that. She said, "I'm sure she gets sick of that, I'm sure I'm not the only one. According to the comments, a lot of people thought that too, but she's apparently a very well-known actress and apparently more famous than him people are saying, so I'm sure it felt weird to begin with."

The comedian then apologised and said,  "Priyanka is her name, Priyanka, I hope I'm pronouncing that right. I just want to apologize to her and anyone who thought that it was really inappropriate of me, sorry sometimes I f**k up." She later also posted a screenshot of Priyanka Chopra's Instagram handle and captioned it, "75 million followers #priyanka." 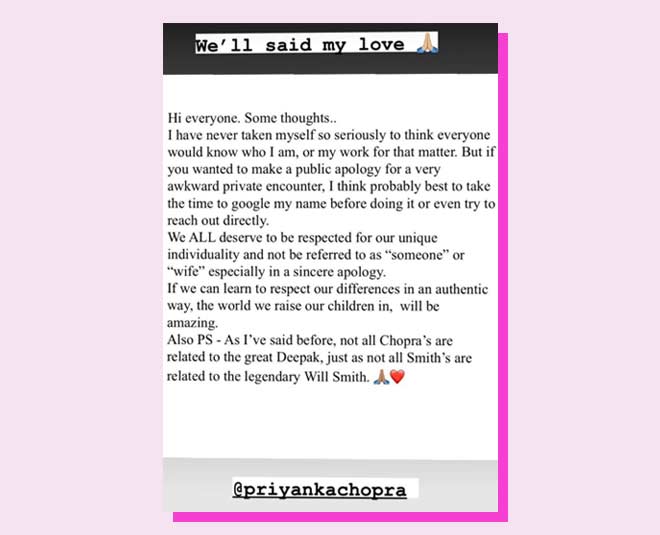 After the comedian's apology video went viral, Priyanka Chopra took to her Instagram handle and broke her silence on this awkward encounter. She wrote, "Hi everyone. Some thoughts. I have never taken myself so seriously to think everyone would know who I am, or my work for that matter. But if you wanted to make a public apology for a very awkward private encounter, I think probably best to take the time to google my name before doing it or even try to reach out directly."

“We ALL deserve to be respected for our unique individuality and not be referred to as “someone" or “wife" in a sincere apology. If we can learn to respect our differences in an authentic way, the world we raise our children in, will be amazing," her post further read.

Her Instagram note concluded, “As I’ve said before, not all Chopra’s are related to the great Deepak, just as not all Smith’s are related to the legendary Will Smith." Husband Nick Jonas shared a screenshot of Priyanka Chopra's Instagram post on his handle and wrote, 'Well said my love with a folding hands emoji'.