Akash Ambani and Shloka Mehta have decided a beautiful name for their little one and it has a special connection with his father's name. 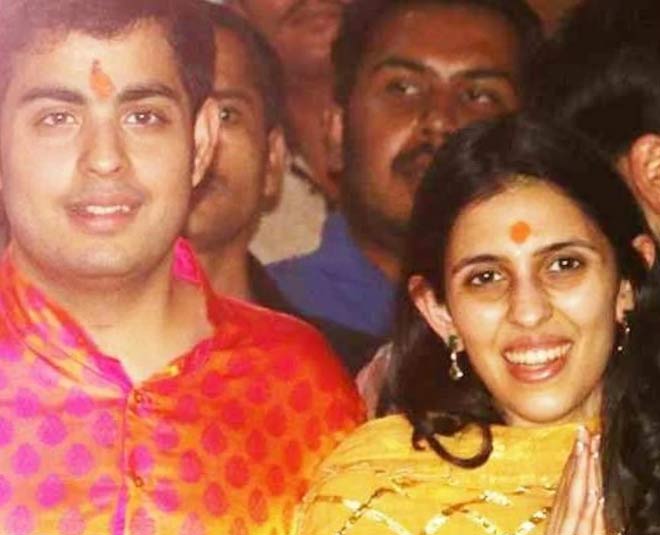 Akash Ambani and Shloka Mehta became parents to a little baby boy a few days back. The Ambani and Mehta families announced the good news with an official statement. Ever since the news is out, people have been waiting to see the grandchild of the Ambani clan.

Earlier this month, a picture of Mukesh Ambani holding his grandson in the hospital went viral on social media but Ambani fans can't keep calm and wish to see more pictures of Akash and Shloka's little one.

Well, looks like we have to wait for a little more till the Ambanis share some pictures of the baby boy. Till then, have a look at the card through which the families announced the name of the newly born. 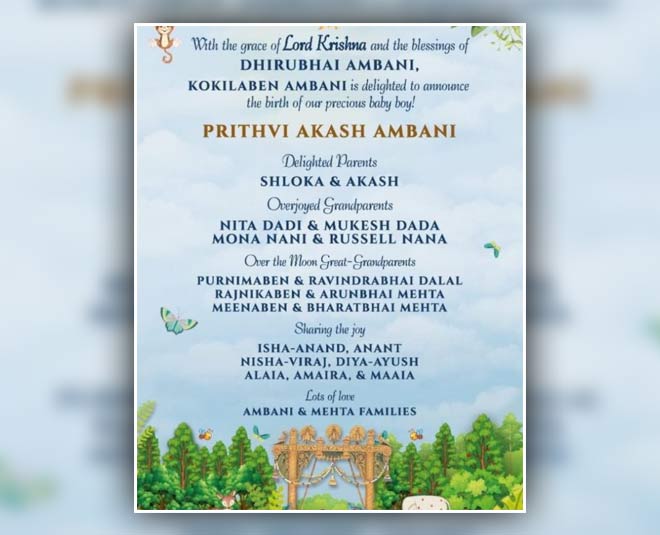 Meaning Of The Name Prithvi

Prithvi or the Vast One is the Sanskrit name of Earth. We love how the little one's name is connected to his father Akash Ambani's.

Though the Ambanis didn't announce Shloka Mehta's pregnancy, there were rumours doing rounds after Mukesh Ambani had mentioned becoming a grandparent in a birthday video the family made for Shloka Mehta.

Prithvi Akash Ambani was born on 10th December at 11:40 am at Reliance Foundation Hospital in Mumbai. On the arrival of their little one, the hospital's lighting was changed to all blue. The Ambani's residence, Antilia was also lit up in blue colour after the birth of the little boy.

The families announced the birth of a baby boy with an official statement that read, "Nita and Mukesh Ambani are delighted to become grandparents for the first time, as they welcomed the great-grandson of Dhirubhai and Kokilaben Ambani. Shloka and Akash Ambani became proud parents of a baby boy today in Mumbai. Both mother and son are doing well. The new arrival has brought immense joy to the Mehta and Ambani families." Parimal Nathwani, Director-Corporate Affairs of RIL, congratulated the Ambani family with a message and picture on his Twitter. He wrote, "Congratulations to Shloka & Akash Ambani for the birth of their baby boy. I also congratulate Shri Mukeshbhai, Neetabhabhi, and the entire Ambani Family for the arrival of the new member. This is indeed a day to rejoice. Lots of love and blessings for the baby."

Shloka Mehta and Akash Ambani are childhood friends who got married in March 2019. The two had a lavish wedding ceremony that was held at Mumbai's Jio World Centre. Their wedding was attended by notable names of the business, Bollywood, and cricket world.

What's your take on the name of the little one? Share your thoughts with us! For more stories around the youngest member of the Ambani clan, stay tuned!