Here is why making fun of child abuse is not funny and we need to stop! 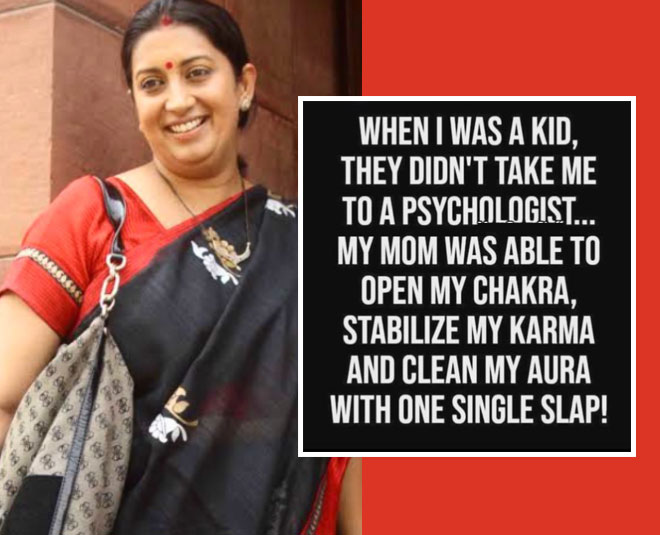 For a long time, jokes about being slapped by parents have circulated, and for a long time, we have found this joke amusing. We can't deny that we've all chuckled at "receiving a flying chappal for mom" jokes at least once. But it's past time for us to realise that it's time to put a stop to it, and that child abuse is not funny!

Smriti Irani, India's Union Minister for Women and Child Development, recently shared a meme on her Instagram account that said, "When I was a kid, they didn't take me to a psychologist... My mom was able to open my chakra, stabilize my karma and clean my aura with one single slap!" 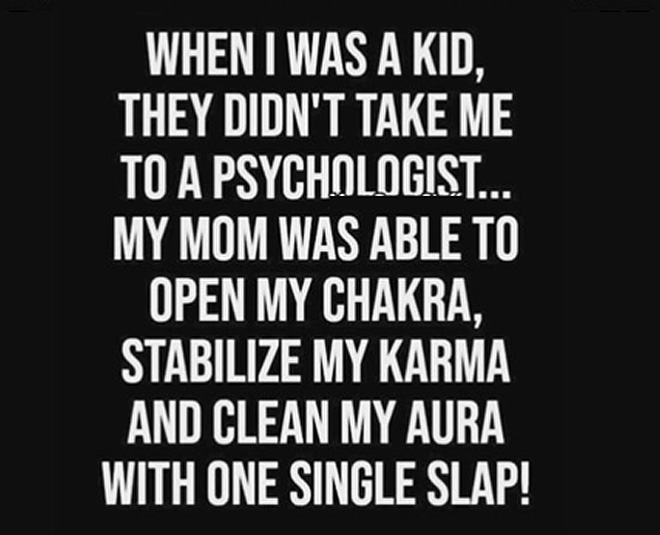 However, the joke failed to amuse many people, and many found it to be somewhat improper rather than funny.

Smriti Irani's joke appeared to be a parody on modern day parenting, where several parents are involving the help of professionals such as child psychiatrists and psychologists, in professionally dealing with their child's mental health.

After the huge criticism on social media about the post, she took the post down late at night yesterday.

We talked to Ritika Singh, an Existential Therapist, M.A., Research Assistant, Logotherapy Candidate, VFI, Israel, practicing in New Delhi, about the effect of such remarks. She shared her inputs with us: 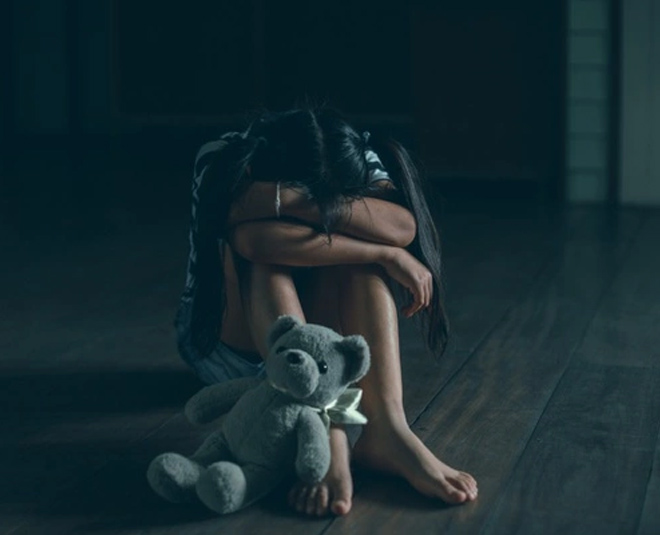 These types of jokes aren't funny since they could be extremely triggering for people who have been physically abused by their parents. For someone who has been a victim of it and has not received an opportunity to work through the trauma will find this rather triggering. Such posts also normalizes the idea of hitting children and poses a barrier to mental health awareness and the proper method to deal with situations.

The Normalisation Of Child Abuse 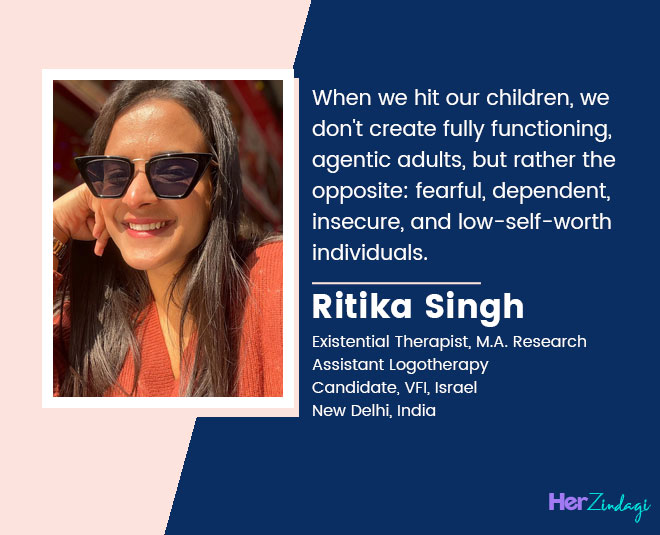 Somehow, physical abuse is normative in Indian parenting, which is actually highly traumatic to the children. We need to and we must sensitize parents when it comes to physical abuse. Teaching something with the scare of hitting is counterproductive. It instills fear and only fear. Slapping and hitting the child may result in the child behaving the way the parent expects them to, which is why parents believe slapping and beating the child is effective. However, if a child is exposed to repeated physical abuse, the mental health consequences are severe, which parents don't realize at that time. In a nutshell, if we hit our children, we don’t end up making them fully functioning and agentic adults, but actually the opposite of that: fearful, dependent, insecure, and suffers from low self-worth.

Ritika Singh says, "The post does not glorify child abuse, according to me. But, it sure does normalize it. And that’s the reason why I said what I said above. Normative does not mean functional. This is what we need to change about parents hitting their children. Just because everyone does it, does not mean everyone must and should do it. Or, this is the only way to teach a child skills. I am vehemently against the idea of physical abuse by parents being normative. This is a space of intergenerational trauma; the parents’ believes in: “Humare parents ne humein thappad lagaye tab hi hum yaha pahuche.” And so, the parent hit the child thinking that it would enable them to become an accomplished individual in life. However, nobody knows what the parent and the child mental go through. And this is a fair preposition to make, neither of them is doing fine.``

Don't miss: Expert Explains Psychological Effects Of Single Parenting On Your Child You Must Keep An Eye On

The Outcome Of Child Abuse 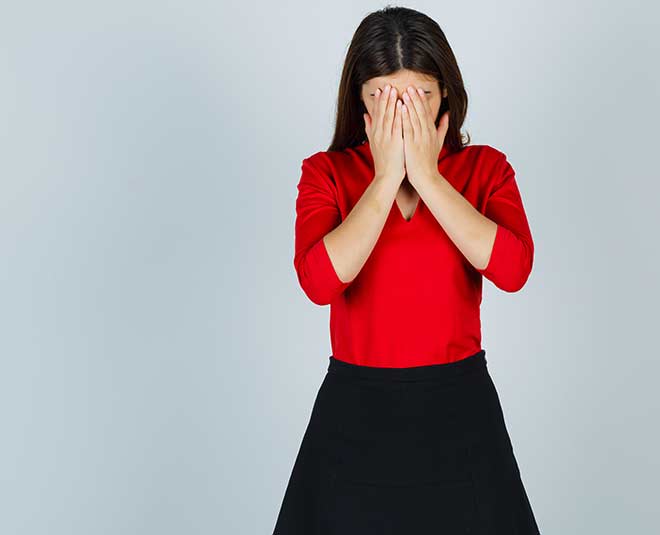 Ritika Singh uses a simplified example and a reductionist approach to describe the concept of what may be the outcome of child abuse when the child becomes an adult:

A child physically abused instills deep-rooted fear. “If I don’t do this, I will be hurt. And if I am hurt, I don’t have anyone to protect me because the person who is supposed to protect me is actually causing me harm (that is, the parent who is expected to be a protector has also become a threat for the child). See how one person splits into two? Begins the brooding of insecurity. These children will live their lives questioning every move they make, every person they care about, every person they fall in love with, every career choice they make. Everything in their external world will never be good enough because they aren’t good enough (a subconscious belief that 99% of us struggle with). “How did I learn I am not good enough?” Well, because had I been good enough, my protector wouldn’t have hit me for making mistakes. They would have understood that as human beings, we are bound to fail and make mistakes. But once I teach a child that making mistakes inherently means that something is wrong with them, I set a very ill precedent for them: “You can never make mistakes and fail at doing life. Because if you do, there would be no one to support/protect you, not even you.” And what does this do? Well, the child remains a child throughout their life. Or if none of this happens, the physically abused child will become an abuser themselves - they will cause harm, hurt, and pain to others. This is how an intergenerational trauma of physical abuse carries, in simplistic ways. Either we become ‘empaths’ or ‘abusers.’ Our parents are abusers because their parents were abusers; their parents were abusers because their parents were abusers; and so on (intergenerational trauma).

Why The Outrage Now?

Many parents are unaware of the harm they are doing to the child when they hit them. They feel they are teaching the youngsters discipline, but this is not the case. In 2020, a UNICEF report detailed 30 ways Indian parents physically, verbally, and emotionally harmed their children. Other studies have shown how parental abuse has a negative impact on a child's brain development and long-term consequences.

Smriti Irani is the Union Minister for Women and Child Development, and as such, she has greater responsibilities, and hence such posts related to child abuse are least expected from her.

She clearly meant this meme as a joke, but many parents are unaware of their own limitations and may become abusive in the belief that it is normal and acceptable.