From a new viewing deck, Mumbaikars can now enjoy a magnificent view of the Sea Link.

The City Of Dreams, Mumbai captivates everyone with its beauty. Now, as the city has got a new viewing deck in Dadar, Mumbaikars can enjoy an uninterrupted view of the Arabian Sea from the shore . On Wednesday, Maharashtra Environment Minister Aaditya Thackeray inaugurated a viewing deck at Chaityabhoomi in Mumbai that extends over the Dadar beach.

Mumbai got a new viewing deck at Dadar Chowpatty with an eyeful view of the Bandra-Worli Sea Link. According to an NDTV report, the new viewing deck, built by the Brihanmumbai Municipal Corporation (BMC) spans across 1,500 square kilometres and is 16 feet above the shore. “Inaugurated this deck in Dadar. It was a stormwater outfall, now converted to a beautiful viewing deck by BMC as we focus on increasing urban open spaces for citizens. Located near Chaityabhoomi, we have proposed to name it ‘Mata Ramabai Ambedkar Smruti viewing deck’,” Thackeray said in a tweet.

Inaugurated this deck in Dadar. It was a storm water outfall, now converted to a beautiful viewing deck by @mybmc as we focus on increasing urban open spaces for citizens. Located near Chaityabhoomi, we have proposed to name it “Mata Ramabai Ambedkar Smruti viewing deck” pic.twitter.com/QE6mm7ZgOW

The viewing deck can hold around 40 people. It is 24 metres long and 20-metres wide. A report by  Indian Express says, the estimated cost of the project was around Rs 3 crore and the deck will be opened to the public at night as well.

Indian Express quoted Kiran Dighavkar, Assistant Municipal Commissioner of G-North ward, “Many visitors used to climb on the redundant outfall to take selfies and photos of the Bandra-Worli sea link. We decided to strengthen the drain outfall area and construct this deck as a tourist attraction."

The Mumbai civic body also posted a video of the deck on its official Twitter account, saying that the newly renovated viewing deck in Chaitya Bhoomi, Dadar, would provide a scenic experience for tourists and citizens.

Don't miss: Places To Go For A Breakfast Date In Mumbai

Plans To Develop 40 More Such Spots 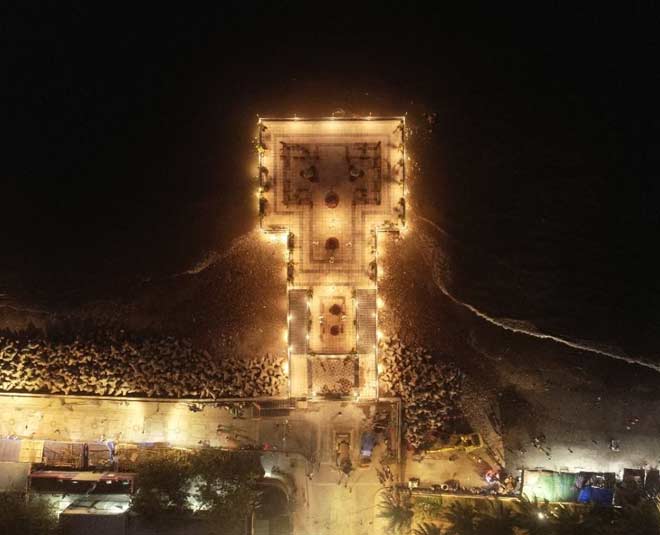 As part of the city's beautification, the state government plans to develop 40 more such sites across Mumbai.

According to officials, in total there are 40 such SWD outfalls in the city and they are planning to explore these. Kiran Dighavkar, assistant municipal commissioner of G North Ward, under which the Dadar Chowpatty falls, said, “We are exploring more such structures to come up in the city as we have 40 such SWD outfalls. It gives citizens another option to socialize and have a community place to network.”

Don't miss: Bandra Is All Decked Up With It's Own Stunning Wonderland Ahead Of New Year, See Pics

How To Reach The Deck?

Tourists can get to the deck using public and private transportation. Those travelling by local train should first stop at the Dadar railway station, which is around 4 kilometres from Chaitanyabhoomi. Buses, taxis, and automobiles can all be used to get to the location.