We asked women about their first reactions after watching the Layer’r shot Ad. Here is what they said.

A recent ad by Layer’s Shot brand has been in the news for all the wrong reasons. The ad had a couple enjoying each other’s company when a group of guys walked in, and one of them asked, “Shot mara?”

The guys replied, “Haan mara.” One of the men from the group replies, “Ab hamari bari hai.” While they were seemingly referring to the perfume, the woman was shown visibly distressed during this problematic conversation. Her reaction made it clear that she was shocked and terrified of what those guys meant by ‘shot’. The casual rape remark in this ad and the series of ads on the same theme enraged the entire country. The ads got banned by the government.

To help understand the gravity of the outrage, we asked 9 women what they felt when they saw the ad. Here are their reactions,

Megha, a 23-year-old Sub-editor at News9, said, “There are several perfume/deodorant ads that have mostly induced a cringe-worthy feeling within me, mostly the ones that have shown women being drawn towards men in some magical way because the man has some nice perfume on.”

“The new ad, though, was quite different, but the makers didn't realise that it also puts out a wrong connotation. Personally, I felt that the dialogues used were unnecessary and even if the makers wanted to use those, the presence of a woman in those scenes was unnecessary,” she added.

Mallick further said, “More than normalising  the rape culture, which I believe cannot be casualised, it made the viewers look at men as creepy animals who look at a woman only with the intention of harming her, in whatever manner.” 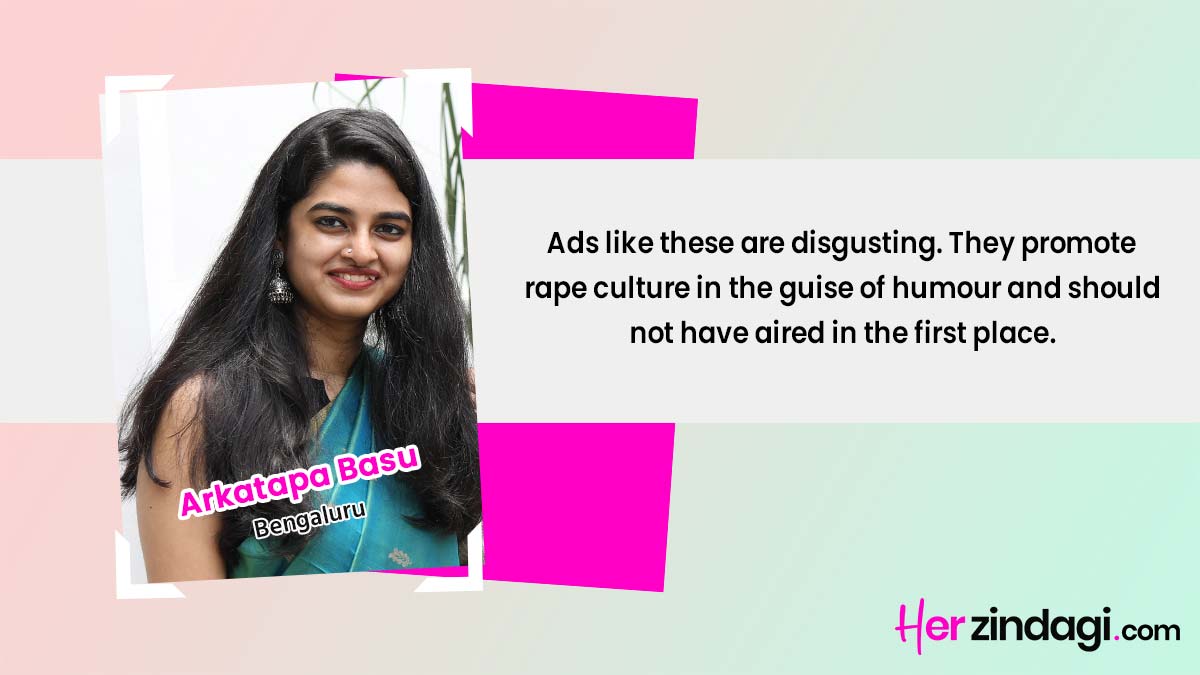 Arkatapa Basu , a 24-year-old writer from Bengaluru saw this ad and asked, “In 2022, how can you put up ads like that? Who approves of them? Why was it even allowed to be telecasted on our televisions?”

She further said, “Ads like these are disgusting. They promote rape culture in the guise of humour and should not have aired in the first place.”

Mampi Debnath saw this ad and shared her views with HerZindagi. She said, “This has a terrible double meaning . In India, movies, songs or dialogues have nauseating undertones .”

She further added, “So, this is the same. This obviously gives the wrong message. Young boys unknowingly will absorb this and might use the 'shot line' somewhere in future. What is being shown to the Indian audience matters!”

Manthra Koliyer is a Content Executive at Gutshot Magazine. She was worried after watching the ad and said, “Just like television shows, advertisements equally impact the mindsets of the viewers. The industry's responsibility is immense, but it is overlooked time and again, which is why we end up watching such advertisements.”

“Although everyone is protesting now, I am still worried about the impact that this advertisement has already caused,” she shared her concern.

Ashwini is a PR in a Mumbai firm. When she saw the Layer’r shot ad, she said, “We thank the Government for raising a voice against the advertisement and imposing the ban. But that is not enough.” She asked, “How did such content pass the filters of censorship?”

She added, “An advertisement goes through multiple stages and processes before airing. Hence, strict actions must be taken against the organisation that was involved and approved the ad.” 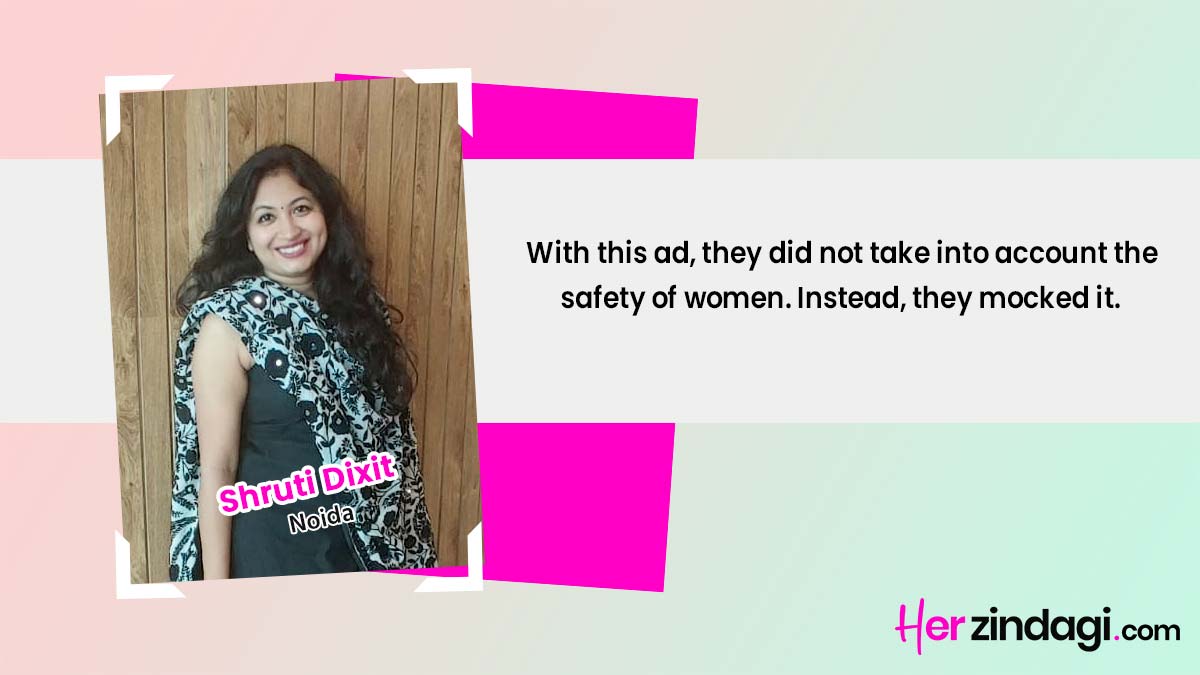 Shruti is a 31-year-old lifestyle journalist in Noida. Speaking on the ad, she asked, “Why are deodorant and perfume ads always sexist? Why do such advertisements with casual rape threats air on the television when India is already infamous for women's safety?”

She added, “It is problematic to see that advertisers and promoters did not consider the safety of women and the mindsets of people consuming it. Instead, they mocked a matter of concern with this advertisement.”

Srishti is a journalist based in Kolkata. Sharing her views on the ad, she said, “I have watched it (ad) twice, and both times I felt repulsed by it. The ad triggered the horrific feelings of past instances when I was subjected to similar harassment by men at empty subways.”

She further added, “It triggered the fear that I had felt the nth number of times when men in the ‘groups’ acted this way and made me feel insecure.”

Don't Miss: Dear Indian Women, Here's Why Your Husband Can Beat You

Vallari is a 24-year-old journalist based in Mumbai. Speaking about the direction and script of the ad, she said, “I felt angry and irritated that the advertising agency thought it was okay to make these kinds of jokes and rape threats. They used such a script to promote a product.”

Don't Miss: Journey Of Srishti Bakshi From Kanyakumari To Kashmir

She added, “I have seen these kinds of ads since childhood and have become unresponsive to them. I have grown to become tired of looking at double meaning ads that blatantly make rape threats. I wish advertisers would use more creativity or ask the writer to put in some effort to create a genuine story.”

Speaking to HerZindagi on the ad, Lakshita, a 21-year-old writer, said, “It is unfortunate that ads promoting religious harmony often cause controversies (controversial advertisements), yet this ad that casually promoted rape culture had received little attention by the same people.”

This is how actual women felt when they saw the ad. For some, it was a trigger to a past trauma, while for others, the ad mocked the idea of safety for women. While it has been banned (Banned Ad), the question remains why it aired in the first place. What did you think about the ad? Share with us on Facebook, and stay tuned to HerZindagi for more such stories.