Winner of Bigg Boss 14 Rubina Dilaik's journey on Bigg Boss 14 hasn't been a smooth one since day 1. Let's have a look since it is the final day of th... 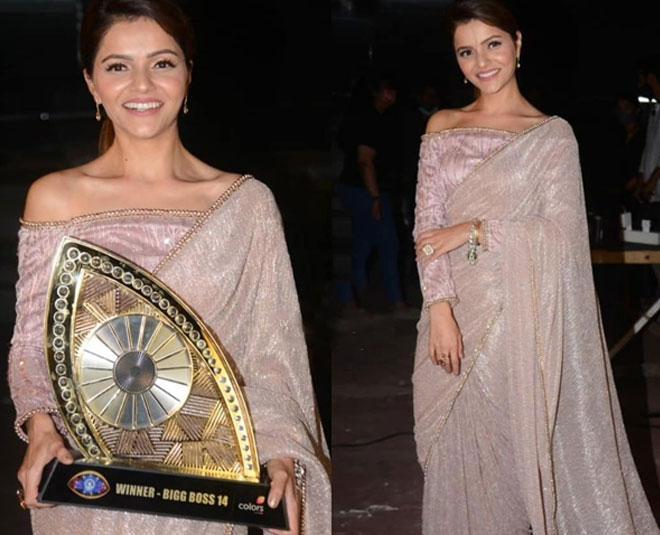 It is the final day of the show, and Rubina Dilaik has won Bigg Boss 14. Well, Rubina Dilaik's journey was not very smooth on the controversial reality show. She was indeed one of the most talked-about contestants on the show but not always for the right reasons.

From getting into ugly spats with her co-contestants to emotional breakdowns on different occasions, Rubina Dilaik's ride on Bigg Boss has been nothing less than a roller coaster. With the grand finale just around the corner and so many of you wondering whom to vote for, here let's take you through her journey from day 1 and help you make the right decision. 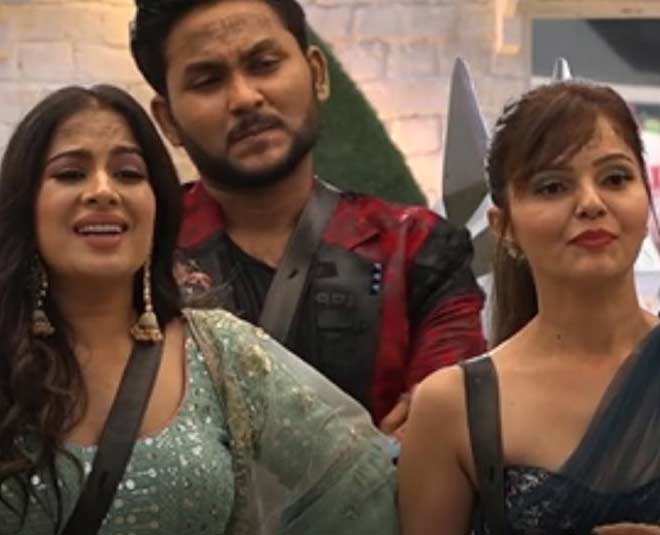 This year, the makers introduced 3 Toofani Seniors - Gauahar Khan, Sidharth Shukla and Hina Khan who acted as mentors for the rest of the contestants. They had the power to decide if the contestants are confirmed or not. Rubina Dilaik along with Nishant Malkhani, Sara Gurpal, and Jaan Kumar Sanu was 'rejected' as they failed the test given by the seniors.

Even after entering the Bigg Boss house, she continued to have arguments with the Toofani Seniors on different occasions. However, soon after seeing her game after a few days, Rubina Dilaik managed to impress BB14 Seniors, Hina Khan, and Gauahar Khan. In one of the episodes, Hina Khan was seen telling Sidharth Shukla that she and Gauahar Khan see Rubina Dilaik as Bigg Boss 14 winner. Sidharth Shukla however didn't agree.

Rubina Dilaik emerged out as a strong and opinionated contestant on the show. However, it started to go against her on different occasions. The difference in opinions did make her get into ugly arguments with almost every contestant inside the house.

It was shocking to see Rubina Dilaik getting into a spat with Jasmin Bhasin who was one of her close friends and supporters on the show. During the Panchayat task, things got ugly between the two. Jasmin Bhasin was seen threatening her that if she goes personal then she will end up saying things that will not look great on television. Jasmin Bhasin also went on to tell Aly Goni that Rubina Dilaik is playing clever games and showing her true colours. This was just the beginning! Things never remained smooth between the two thereafter.

There isn't just one occasion where these two were at loggerheads. Throughout the show, the two had ugly fights. While Rubina Dilaik called Rahul Vaidya 'male chauvinist' on occasions, Rahul Vaidya always said Rubina was egoistic. The two even went personal on occasions. During one of the episodes, Rahul Vaidya was seen commenting on Rubina and Abhinav's relationship too.

Don't Miss: Here Is Why We Feel Rubina Dilaik Can Win Bigg Boss 14

Rubina Dilaik had a major fight with wild card contestant Sonali Phogat when she threw her food in the dustbin. Their fights on the show went ugly and Sonali was also seen abusing Rubina Dilaik during one of the episodes. Rubina Dilaik lost her cool and asked Sonali if she will use a similar word for her daughter. Sonali Phogat got slammed for using abusive language on the show. On coming out of the Bigg Boss house, Sonali Phogat shared that Rubina Dilaik was jealous of her because she is powerful and a politician. She went on to say that she is arrogant and doesn't let anyone speak.

Rakhi Sawant's continuous flirting with Abhinav Shukla didn't go down well with Rubina Dilaik. On occasions, she was seen telling Rakhi Sawant that she is crossing the line. However, she couldn't control her anger when Rakhi Sawant passed dirty comments on Abhinav Shukla and threw a bucket of dirty water on her.

Don't Miss: Rubina Dilaik Or Rahul Vaidya, Who Will Win Bigg Boss 14 As Per Prediction?

Throughout the season of Bigg Boss, there have been multiple occasions where Rubina Dilaik was bashed by the host Salman Khan for taking the wrong route on the show.

During one of the tasks, Rubina Dilaik opted out because she felt it was disrespectful to her. This was just the beginning of the show and she got schooled for her attitude on the show. The host asked her to check her attitude or it can go against her on the show.

Rubina Dilaik even complained to Bigg Boss about Salman Khan for calling her husband 'samaan'. During the weekend episode, the host cleared that he said it as a joke because Abhinav Shukla wasn't doing much. He also told Rubina to not take his name to get famous. He further slammed Rubina Dilaik for showing her husband in low light.

For the first time in the history of Bigg Boss, host Salman Khan was called 'biased' on the show. Rubina Dilaik's fans have been slamming the host for targetting her from the very first day. 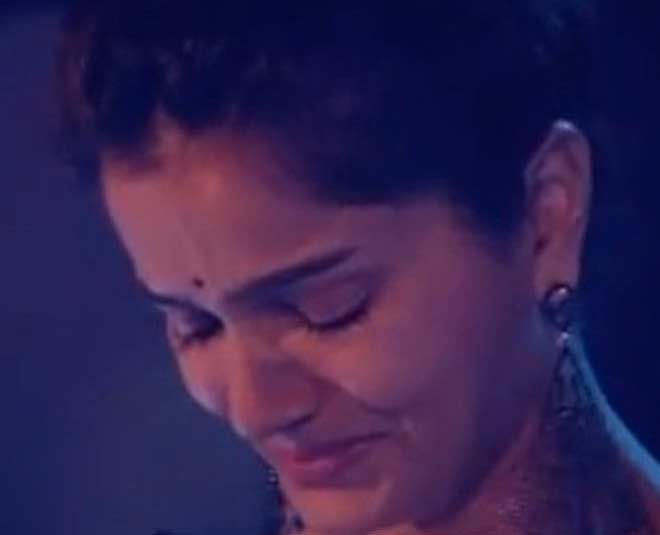 Rubina Dilaik did have emotional support in the Bigg Boss house as she entered along with her husband. However, the two had a lot of differences and arguments on the show.

During one of the tasks given to Bigg Boss contestants, Rubina Dilaik revealed a big secret of her life. She shared that she was on the verge to get separated from her husband Abhinav Shukla. The two had given each other some time till November to think about getting divorced. She shared that if they hadn't come to the Bigg Boss house together, they wouldn't have been together. She was seen crying inconsolably as she revealed about the divorce during the task.

Recently during the Weekend Ka Vaar, when host Salman Khan was seen slamming her game on the show, she revealed another big secret about her life. She shared that 8 years ago she was exactly like this because her relationship with her mother and father were not that great. Rubina Dilaik revealed that she had temper issues, suicidal tendencies and it was also the reason why her relationship was about to end.

Recently, when radio jockeys entered the Bigg Boss house for a special interaction with the top finalists, Rahul Vaidya was asked to dedicate a song for Rubina Dilaik. He sang a few lines from the song Jaadu Teri Nazar and were seen dancing together.

Earlier, when Disha Parmar entered the house on Valentine's day, the two were seen having a sweet conversation for the first time. Looks like with the show coming to an end, the two have decided to put an end to their enmity too.

Rubina Dilaik is one contestant who had rifts with almost every co-contestant inside the house. While some of them continue to remain sour, other relationships have changed over a period of time. Aly Goni and Rubina Dilaik weren't too close initially due to Rubina's spat with his close friend Jasmin Bhasin. However, when Jasmin Bhasin got evicted, Rubina Dilaik took great care of Aly Goni and they developed a strong bond. During one of the episodes, he was seen saying that Rubina Dilaik is his sister for life. However, on her entry back as a supporter of Aly Goni, Jasmin Bhasin warned him of Rubina Dilaik and told him how she is using him to move ahead in the show. She also commented that she might have created this fake bond with him just for Bigg Boss.

Rubina Dilaik was also called a dominating wife by the viewers on occasions where she didn't let Abhinav speak or spoke on his behalf.

Recently before his exit, when Abhinav Shukla tried to explain to her that she should think before responding to things, she was seen breaking down. This was after host Salman Khan schooled her for making fun of Rakhi Sawant. Seeing her cry, he explained that he is trying to make her explain where she went wrong. 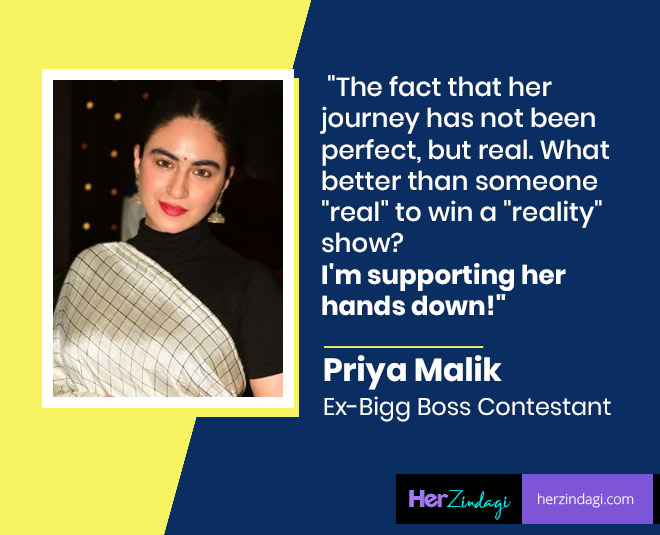 Former Bigg Boss contestant Priya Malik in an exclusive chat with us talked about Rubina Dilaik's game on Bigg Boss. She said, "The fact that her journey has not been perfect, but real. What better than someone "real" to win a "reality" show? I'm supporting her hands down!" She further shared, "I don't know her personally but have really admired her in the show."

The ex-contestant who was inside the Bigg Boss house as a proxy to Eijaz Khan some time back tweeted while answering to a user, "Yaa like even not trophy but the cash..Its just that winner gets a good amount so i wished..But even i know jeetegi toh Rubi hi."

Yaa like even not trophy but the cash..Its just that winner gets a good amount so i wished..But even i know jeetegi toh Rubi hi 🥰👸🏻 https://t.co/9XsLHVUHs1

Ex-contestant of the show, Sara Gurpal is also rooting for Rubina Dilaik this season.

Bigg Boss ex-contestant, Nishant Singh Malkani too in an interview shared that he feels Rubina Dilaik and Abhinav Shukla are the real winners of the show.

Will you vote for Rubina Dilaik? Do you think she deserves to take home the trophy? Share your thoughts with us! For more such stories on Bigg Boss, stay tuned!