Famous Indian leg spinner, Yuzvendra Chahal got hitched with Dhanashree Verma this Tuesday, take a look at the details. 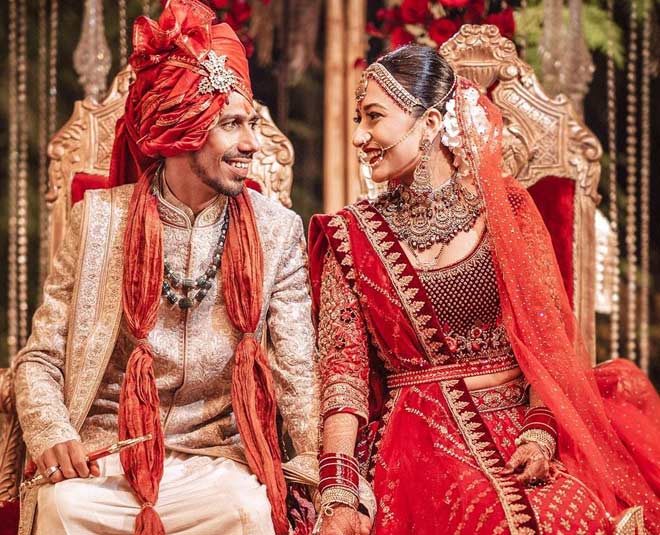 Indian cricket star Yuzvendra Chahal finally got married on the 22nd of December which was a Tuesday. The cricketer took to social media to share his wedding pictures along with his wife Dhanashree Verma, who is a choreographer by profession. The couple got engaged in August of this year and then Yuzvendra had to leave for Dubai for the IPL.

The post that he had shared on his Instagram handle, received a lot of wishes and appreciation as his fans were very excited and elated seeing Yuzvendra get married. Let us take you through their engagement, marriage, and love story. So, keep reading to find out more details.

How The Couple Met Well, it wouldn’t be wrong if we say that the couple met each other virtually only for the first time. Yes, that’s right. Actually, both of them didn’t even know each other before April of this year. It Dhanashree is a choregrapher and used to post videos on Youtube which apparently Yuzvendra really liked. Therefore, during the lockdown when he decided to go for learning some new skills, dance was also one of them. So, he contacted Dhanashree in the same context and they started off as teacher and student but the frequent interactions made them closer, so much so that the couple finally found their ever after.

In an interview with the Hindustan Times, Dhanashree told, “It started off as a student-teacher relationship in April. He had seen my dance videos on YouTube and knew about my work. During the lockdown, Yuzi decided to learn a few new things, including dance. So, he got in touch with me and we started our classes. Slowly we became friends and sort of felt a connect.”

Their Engagement And Roka Ceremony The fans got to know about this couple’s fairytale love only in August when Yuzvendra actually shared the insights from his engagement and Roka ceremony.  In the roka pictures, the couple and their families were clicked sharing the joy together with numerous gifts been presented to the to-be bride and groom. In some other pictures from their engagement, the couple was spotted wearing matching ivory shade outfits and rocking their prewedding shoot with a romantic mood, holding each other in a lovely embrace while smiling at each other.

When Dhanashree was asked about how Yuzvendra won over her, she said, “Yuzi is humble, down-to-earth, friendly and a total family guy. His humility bowled me over. The kind of values I’ve been brought up with, I actually wanted someone like him as my life partner. We both are ambitious and are supportive of each other’s profession. We both are fun-loving, so there’s never going to be a dull moment.”, to the Hindustan Times. Dhanashree also visited Chahal in the midst of the IPL where the two had reportedly spent some quality time together.

Don't miss: Unseen Pictures Of Radhika Merchant And Anant Ambani That Are All About Love! 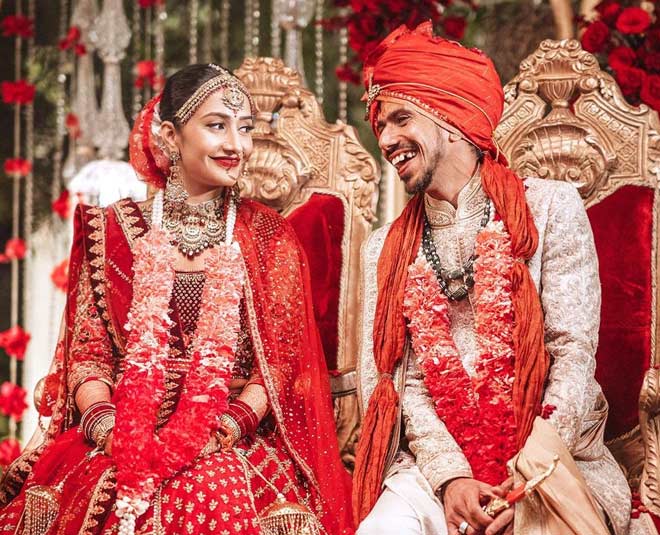 The marriage as we already know, took place on the 22nd of December in Gurugram’s Karma Lakelands resort, according to Hindu rituals(Everything to know about Kashmiri weddings). The couple was spotted wearing a maroon and ivory combination, where Dhanashree wore a heavily embellished maroon lehenga, Yuzvendra donned an ivory sherwani with hints of maroon in his outfit too. 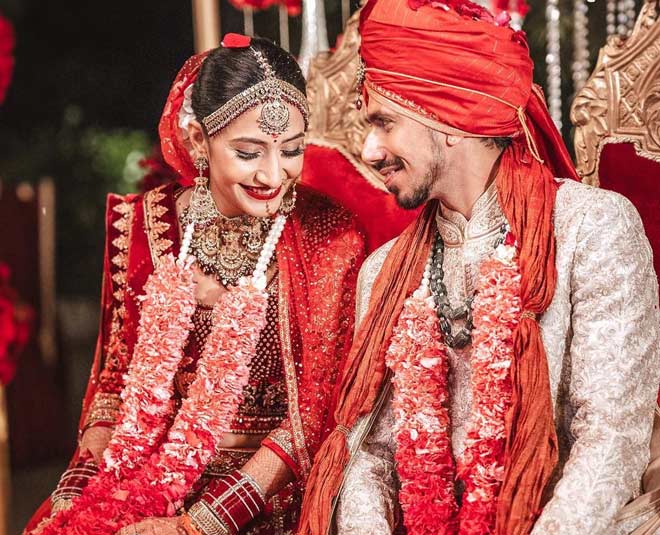 The pictures that he shared on his Instagram were captioned, “We started at “Once upon a time” and found “Our happily ever after,” coz’ finally, #DhanaSaidYuz for infinity & beyond!” and showed the lovebirds looking at each other lovingly and that had us going gaga over this adorable duo.

Yuzvendra also shared some more pictures from his engagement yesterday, which received comments from famous cricketers like Brian Lara, Sajid Mahmood, and a few others.