The officials at Cooper Hospital in Mumbai, as per a report by Aaj Tak confirmed that he died of a heart attack.

As per the report by AajTak, Sidharth Shukla had his medicine before sleeping at night but didn't wake up. The hospital authorities later confirmed to several media agencies about the same.

Sidharth Shukla is best known for his roles in television shows like Balika Vadhu and Dil Se Dil Tak. The actor also made his Bollywood debut in the year 2014 with Alia Bhatt and Varun Dhawan starrer Humpty Sharma Ki Dulhania. He also participated in many television reality shows like Jhalak Dikhhla Jaa 6, Fear Factor: Khatron Ke Khiladi, Bigg Boss 13. He emerged as the winner of Bigg Boss 13, which was one of the most popular seasons of the controversial reality show.

The terrible news just broke this morning and his friends from the industry and fans all across the world are heartbroken.  Sidharth Shukla's alleged ex-girlfriend, Rashami Desai took to her Twitter handle this morning and shared a heartbreaking tweet. Have a look here - 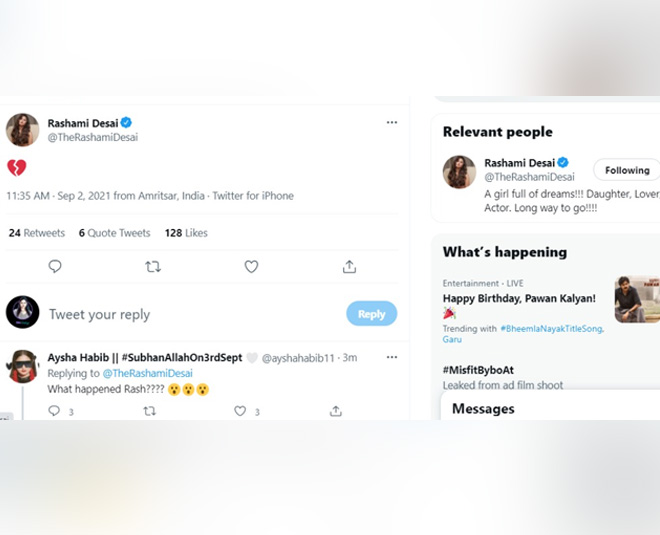 Sidharth Shukla's death news has come as a shock to the entire nation and his fans and friends are pouring in condolences for his family. Former cricketer Virender Sehwag took to his Twitter handle and wrote, "Another reminder of how fragile life is. Heartfelt condolences to #SiddharthShukla 's family and friends. Om Shanti."

Varun Dhawan took to his Instagram handle and sharing a picture with Sidharth Shukla wrote, "Rip brother 💔u are loved by so many and u touched so many with ur kind heart and beautiful personality. Today heaven has gained a star and we have lost one. My deepest condolences to the family and loved ones."

Another reminder of how fragile life is.
Heartfelt condolences to #SiddharthShukla 's family and friends.
Om Shanti pic.twitter.com/zTinZmyaJ5

Not able to believe the news.
So shocked and saddened to hear this. May your soul rest in peace 🙏🏻🌺#SiddharthShukla

Life is so unpredictable. Absolutely shocked to hear about Sidharth's passing. Devastating beyond words. My condolences to his family, friends and fans. Rest in peace my friend🙏🏻 #SiddharthShuklapic.twitter.com/kRHL1EatYu

Don't Miss: Sidharth Shukla Dies At 40: All You Need To Know About His Journey, From His First AD to First International Win

Shocked beyond words!! Gone toooooo soon…. Condolences to his family, loved ones. - He was loved by millions. #SiddharthShukla you will be missed - rest in peace brother. Om Shanti 🙏🏽 https://t.co/gvttNVDHxh

Shocked and sad to know about Sidharth Shukla. Gone too soon. Prayers. Rest in peace. 🙏🙏🙏

Actor and Bigg Boss winner Vindu Dara Singh too took to his Twitter handle and wrote, "Gone to soon bro @sidharth_shukla your glow will be with us forever and your loss is just irreplaceable!! There was no winner like you in #Biggboss and there never will be another ,lagta hai buri nazar par ab hamesha vishvas karna padega  ! #RipSidharthShukla."

Bollywood actor Madhuri Dixit too took to her Twitter and shared her condolences. She wrote, "It's just unbelievable and shocking. You will always be remembered @sidharth_shukla. May your soul rest in peace. My heartfelt condolences to the family 😞."

Totally Numb! This is beyond shocking! Life is so unpredictable. May his soul rest in peace🙏🏻 #SiddharthShuklapic.twitter.com/OjvCBDXN94

Amidst the breaking news of Sidharth Shukla, his PR team has sent across a message to all the media houses. Read it here - Shehnaaz Gill and Sidharth Shukla were reportedly dating. The two were lovingly called SidNaaz by their fans. No news on Shehnaaz Gill is out as of now. However, Shehnaaz' father, Santokh Singh Sukh spoke to Spotboye and shared, "I am not in the condition to talk right now. I cannot believe whatever has happened." When asked if he talked to Shehnaaz, he said, "I spoke to her. She is not fine. My son Shehbaaz has left for Mumbai to be with her and I will be going later."

Sidharth Shukla's untimely demise is shocking and our heart goes out to all his friends and family. Sidharth Shukla is survived by his mother and two sisters.