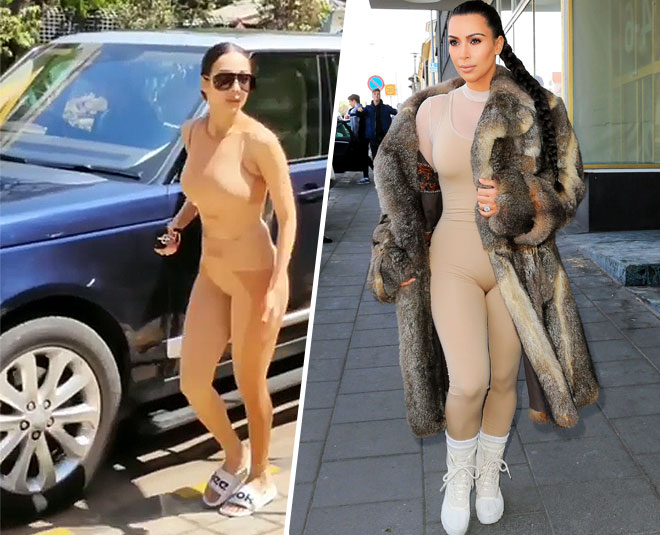 Malaika Arora, who is known for making bold fashion statement has often reminded us of the American television personality, Kim Kardashian with her sartorial choices. While many times she oozed one and all with her fashionable ensembles and garnered much appreciation, it was recently on Thursday, when the Bollywood diva faced heavy criticism over a nude body-fitted outfit she was wearing. Seems like the 46-year-old actor was on her way to the gym when she was caught on the cameras in the skin-tight athleisure. As soon as the clip of her wearing that dress surfaced on the social media, netizens commenced comparing her with Kim Kardashian. 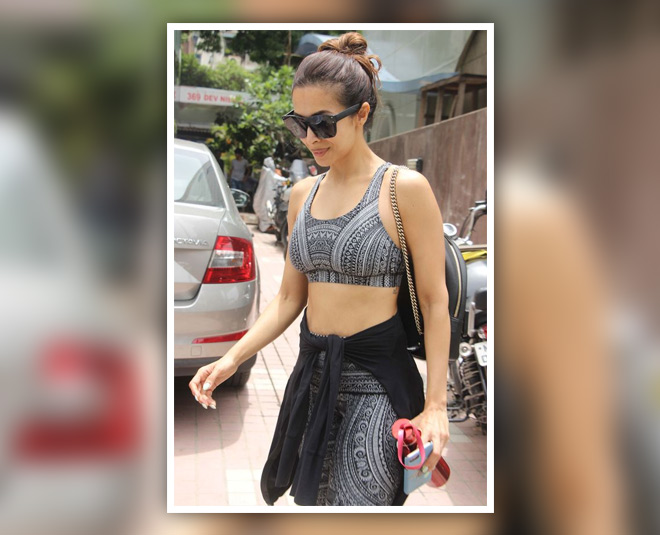 The 39-year-old American television star’s love for nudes is not hidden from anyone. Even at the 2019 Met Gala Kim wore a nude-coloured Thierry Mugler minidress that was covered in white crystals. Malaika’s recent look resembled more or less like couture the Keeping Up with the Kardashians star was seen wearing during her Iceland visit. It was a nude bodysuit which she paired with a long fur coat and white boots. While Kim’s choice became a fashion statement, for Malaika it turned out to be a disaster.

The video posted by photojournalist, Viral Bhayani, had several comments disapproving the actor’s dress up. Comments were saying, “India k sasta Kim Kardashian,” “Low budget Kim Kardashian,” “Stop copying Kardashian’s sisters,” and “Wannabe kim Kardashian.” But, unlike many, there were also a few who did like her ensemble. Receiving criticism especially on social media is not new for celebs. There have been several other occasions when Malaika faced heat for one or the other reason.

Back in November 2019, the model-actor posted a snap with her son captioning “When the son is being all nice n taking care of his mommy” on Instagram. Social media users didn’t find it appropriate and called her out saying the picture looked “wrong.” While many tweeted “Why does this look so wrong?” another user said, “why is the son shirtless? what is this camera angle?? what.”

Don't Miss: Fitness Mantra: This Is What Malaika Arora Does For A Perfect Figure

Don't Miss: Fitness Queen Of Bollywood, Malaika Arora Is An Inspiration For All Of Us!

However, the disapprovals and fault-finding do not bother the fitness fanatic diva, she cleared it during an interview with a leading media house. “I don’t bother at all. It’s really sad trolling etc. I feel social media has become a very negative space and that’s sad. Nobody wants to see negativity at the end of the day I feel you should spread happiness and positivity. To answer your questions, I don’t care and I don’t bother. I feel logon ka kaam hai kehna (I feel no matter what, people will talk), they will do that and I can’t go around and stop someone. People will continue talking so let them,” she was quoted saying.