Daughters Entitled To Self-Acquired And Inherited Properties After Father’s Death Without A Will: SC

The SC has put an end to a long-running debate over a daughter's right to inherit her father's self-acquired property.

The Supreme Court of India has been loud and liberal (rightly) in interpreting the law of inheritance for Hindu Women in the recent past. On 20th January 2022, in the matter of Arunachala Gounder (Dead) Vs Ponnusamy (Civil Appeal No. 6659 Of 2011), the Supreme Court of India held that when a Hindu father dies without a will, his daughter is entitled to inherit his self-acquired property or that obtained through family inheritance.

The Supreme Court of India held that “If a property of a male Hindu dying intestate (without a will) is a self-acquired property or obtained in the partition of a coparcenary or a family property, the same would devolve by inheritance and not by survivorship, and a daughter of such a male Hindu would be entitled to inherit such property in preference to other collaterals (such as sons/daughters of brothers of deceased father)."

Regarding the judgement, Swagita Pandey, Associate at Lexport says, "This landmark decision has put a halt on long lasting debate about the right of the daughter to inherit the self-acquired property of her father, in the absence of any other legal heir". 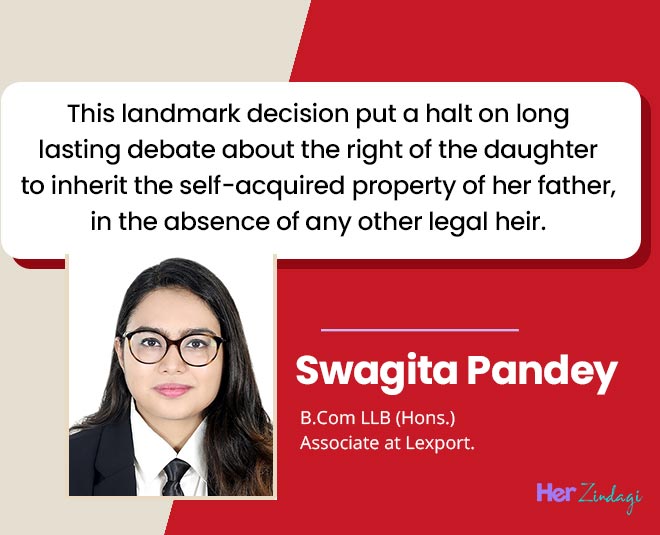 The judgement came after it was dealing with a case in which a Hindu man with self-acquired property died and one of the five heirs filed a petition for property partition.

The judgement came on an appeal case against Madras High Court verdict which dealt with the property rights of Hindu women and widows under the Hindu Succession Act.

Marappa Gounder, a Hindu, died with self-acquired property. He had a younger brother, Ramasamy Gounder, who had already died, and a daughter, Kupayee Ammal.

After Kupayee Ammal died without a will, her property was divided among her uncle Ramasamy Gounder's five heirs in a 1/5th share each. One of the five heirs, Tangamma, filed a suit for property division.

The court was examining whether the daughter had the right to inherit her father's self-acquired property in the absence of any other legal heirs. The court was dealing with whether the property would pass to the daughter by inheritance or to the man's brother by survivorship after the father died without a will.

According to Live Law, the court was also looking at the order of succession following the death of the daughter that happened after amendments to the Hindu Succession Act, 1956, came into force.

In its verdict, the court held that upon the father’s death, such property would devolve by inheritance and not by survivorship.

“The main scheme of this Act is to establish complete equality between male and female with regard to property rights and the rights of the female were declared absolute, completely abolishing all notions of a limited estate,” the court said. “The Act brought about changes in the law of succession among Hindus and gave rights which were till then unknown in relation to women’s property.”

The court held that the 1956 Act shall apply in this case and so Ramasamy Gounder’s daughters, being Class-I heirs of their father, too shall be the heirs and entitled to the share in the suit properties.

For more such stories,stay tuned to HerZindagi!