In this viral video on social media, bride and her girl gang can be seen doing some quirky steps to a track from the 90s. 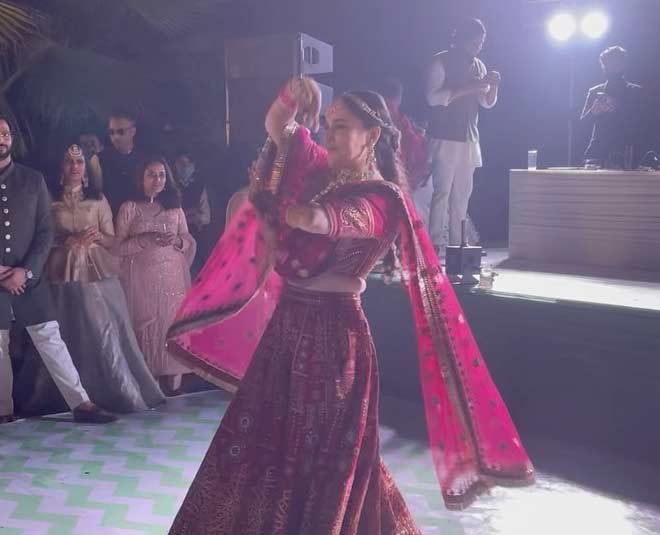 Right from the brother of the bride to the sisters of the groom, all the members of the family put in extra effort to nail their dance performance on the big day.

Dance songs play a key role because no one expects nothing less than a blockbuster track to match the zeal of the occasion. Brides and grooms today put in extra effort to pick their dance songs because they can make a whole lot of difference and can even end up making your video go viral just like this bride.

A video of a bride dancing with her bridesmaids dancing to the song, Husn Hai Suhana from the movie Coolie No. 1 is going viral on social media. Though the track from Govinda and Karisma Kapoor starrer Coolie no. 1 was remixed for its remake last year, the bride and bridesmaid went full desi and picked the original track for their performance.

In the viral video, the bride and bridesmaids can be seen doing quirky steps to the track and the guests can be seen clapping and hooting.

Not just the bride's group performance with her girl gang but her solo performance too is getting a lot of love from the netizens.

For her solo performance, the bride opted for the track Piya Tose from the movie, Guide. The bride, however, chose its cover song by Jonita Gandhi instead of the original track sung by Lata Mangeshkar.

The bride gracefully performed to the beautiful track. We couldn't see the groom's reaction to her dance but we are sure it was priceless seeing his bride on the floor.

Netizens flooded this post by More Than Thumkas with apprecitation for the bride's dance. A user wrote,  "beautiful and graceful too." Another one wrote, "So gracefully performed."

Don't Miss: A Russian Couple Wows The Internet With Their Indian Style Wedding

Do you have any more suggestions for the bride's solo or group performance? If yes, write to us and we would be happy to share the list with the bride-to-be. Tell us your thoughts on the bride and her girl gang's viral dance video on our Faccebook page. For more such trending stories, stay tuned to HerZindagi.com