Rakhi Sawant Lock Horns With Kangana, Look At Her Most Hilarious Comebacks That Gave Us ROFL Moments

Rakhi Sawant loves to speak her heart out and now has expressed her anger at Kangana Ranaut's comments regarding Salman Khan’s reality show Bigg Boss.

Rakhi Sawant needs no introduction! She is regarded as one of the most controversial and outspoken actresses in the entertainment industry. From picking up fights to using explicit language, this drama queen has done it all!

Moreover, she is known for making such statements that will either make you laugh or make you wonder ‘Is she for real?’

Rakhi is always trending on social media. Why? Whether she is hitting the gym or running usual errands, she surely manages to get attention from the paparazzi.

Now, this time, she is in the headlines for slamming Bollywood actress Kangana Ranaut. But this has not happened for the first time.

So, starting from the Rakhi-Kangana controversy, we thought of bringing you some of the most hilarious comebacks of Rakhi Sawant that gave us some serious ROFL moments.

Why Did Rakhi Decide To Lock Horns With Kangana? 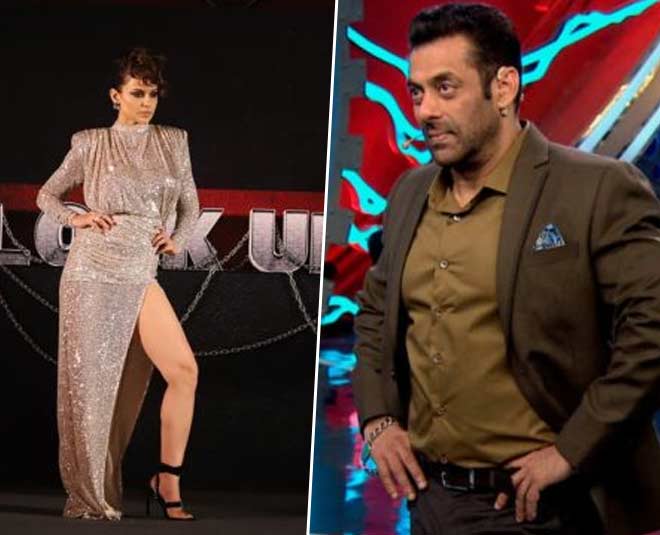 Ever since Kangana Ranaut has announced her upcoming reality show ‘Lock Upp’, she has been garnering attention for various reasons.

When Kangana unveiled the first promo of her reality show, she was seen poking fun at Salman Khan’s hosted reality show Bigg Boss. In the promotional event, she apparently said, “Yeh aapke bhai ka ghar nahi hai (This is not your brother's house)."

This statement irked Rakhi Sawant. As we all know that Rakhi is an avid follower of Bigg Boss and also, has participated in three seasons of the reality show including its first and the latest season. She expressed her anger at Kangana's statement in an interview.

When Rakhi was asked if she would like to participate in the show Lock Upp, she said, “Mujhe bahut bura laga jab Kangana ne kaha, ‘Yeh tumhare bhai ka ghar nahi hai,' (I felt very bad when Kangana said 'it's not your brother's house')."

This did not end here. She continued saying that Salman Khan is running the show Bigg Boss as he has the guts to run it for these many seasons. She opined, “Behen, suno, itne time se bhai hi show chala rahe hain. Tum mein dum hai to ek show chala ke dikhao. I think Bhai mein dum hai, behen mein nahin hai (Listen, sister, Bhai has been running the show for so long. If you have the guts, try running one show. I think Bhai has the guts, sister doesn’t).”

Rakhi also slammed the Bollywood Diva for her remarks about the Hindi film industry. She said, “Tum to Bollywood ko bahut gaaliyan de rahi thi, ab vapis laut kar aa gayi. Isliye kehte hain, gaaliyan mat do Bollywood ko, tumhe aakhir Bollywood ki hi zaroort padegi. (You were abusing Bollywood and now, look you have returned here. That’s why it is always said that one shouldn’t abuse Bollywood, you would need this industry at the end of the day.)”

Don't miss: Queen Of Controversy, Rakhi Sawant's Journey Has Been Full Of Struggle But It's Inspiring Slamming Kangana was not the first time that Rakhi has defended her Bhai Jaan Salman Khan. She has done it earlier as well.

Remember when self-proclaimed critic Kamaal R Khan released a review of Salman Khan starrer "Radhe: Your Most Wanted Bhai"? Though, he was served a suit but Rakhi Sawant didn’t leave him either.

She added, “My pants come from America, milk comes from Switzerland. Lokhandwala se Rs. 750 mein khareed ke laata hai. Wahi pant pehenta hai aur jhoot bolta hai (He gets those pants from Lokhandwala in Rs. 750 and lies about them)."

Don't miss: Rakhi Sawant Has Decided To Split With Her Husband, Ritesh Singh. Here's All About It!

Asking A Photographer If ‘Coronavirus’ Is His Relative We told you, Rakhi Sawant is truly unpredictable. From grabbing herself a cup of coffee wearing a PPE kit to going to her dance classes in the COVID-era, she has done everything. So, when she was followed by paparazzi, she asked the photographer to mask up but in her own style.

She asked him, “Tera chacha hai Corona, mama, kaka hai, padosi hai… jo tujhe nahi hoga? (Is corona your uncle, relative or a neighbour that you will not get the virus?)”

Isn’t Rakhi Sawant a true entertainer? Do share your thoughts with us on our Facebook page. For more such stories, stay tuned to HerZindagi!