In the second season of her show What Women Want, Kareena Kapoor had Kartik Aaryan as the second guest. Here is all what Kartik shared on the show. 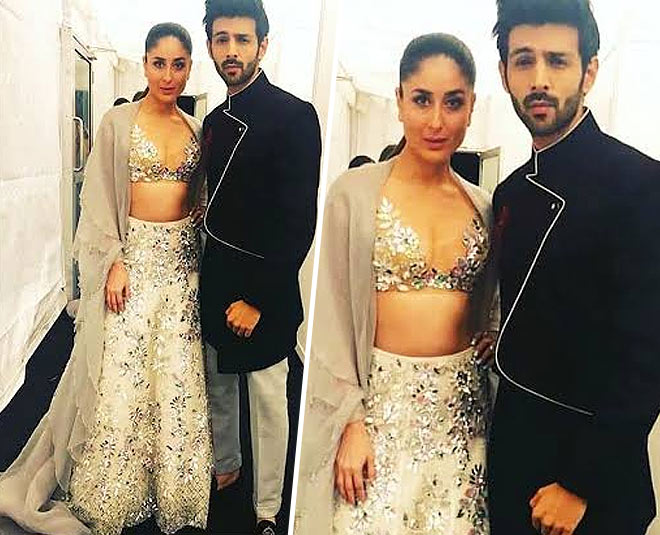 Kareena Kapoor Khan started her radio programme, What Women Want last year and this year she has come back with the second season of the show. We last shared with you that this season will have two male guests on the show. Saif Ali Khan and Kartik Aaryan are only two males who will feature on the show. Well, we have been waiting for long to see Bebo chat with Kartik Aaryan.

Finally, the show is live and a couple of videos from the programme are going viral over the net.

A post shared by Kareena Kapoor Khan Videos (@kareenakapoorvideos) onDec 19, 2019 at 3:02am PST

So, there was a fun segment on the show where Kartik was asked to like, block and friend zone from the list of names given to him. Kartik gave a 'like' for Sara with a smile, blocked Sonu Ke Titu Ki Sweety co-star Nushrat Bharucha and friend-zoned Kriti Sanon.

Kareena then announces 'Sara has been liked' and hearing this, Kartik is all red, blushing.

On the show, Kareena Kapoor asked Kartik if he uses any dating app to which he replied, “No, I never felt the need."

Kareena said, “Especially now, I don’t think you should be on a dating app.” Did Kareena here just hinted at Kartik being in a relationship?

A post shared by Kareena Kapoor Khan Videos (@kareenakapoorvideos) onDec 19, 2019 at 3:13am PST

“To me, there was no criticism jo mere pass aya tha. Matlab media mein kayi baar, ek do baar question pooch lete they ya phir kahin na kahin kuch ata tha, lekin maximum time humesha mere pass there was this love which used to come towards me and people actually appreciated the film. Umm… even the girls! I mean they took it with a pinch of salt."

When the two of them shot for the show a few months back, a video of Kartik and Kareena talking about the show went viral.  In the video, Kareena can be seen saying, "It's a good show. Topics and all are really nice and the topic was perfect for you. And we are not getting too many guys, there has only been Saif and you." To this, Kartik replied, "thanks."

Don't Miss: Throwback! Sara Ali Khan's Childhood Pictures Proves That She Was Born To Be A Fashionista

There were earlier reports that Kartik and Sara have parted ways but Kartik's chat with Bebo on the show comes as a ray of hope for all Sara - Kartik fans. For all those who don't know, Sara Ali Khan and Kartik Aaryan will soon be seen on the big screen together with Imtiaz Ali's Love Aaj Kal 2.