Throwback! Sara Ali Khan's Childhood Pictures Proves That She Was Born To Be A Fashionista

Sara Ali Khan is one of the most loved star kid. Recently, the Simmba actress took to Instagram to share a couple of childhood photos and these pictur... 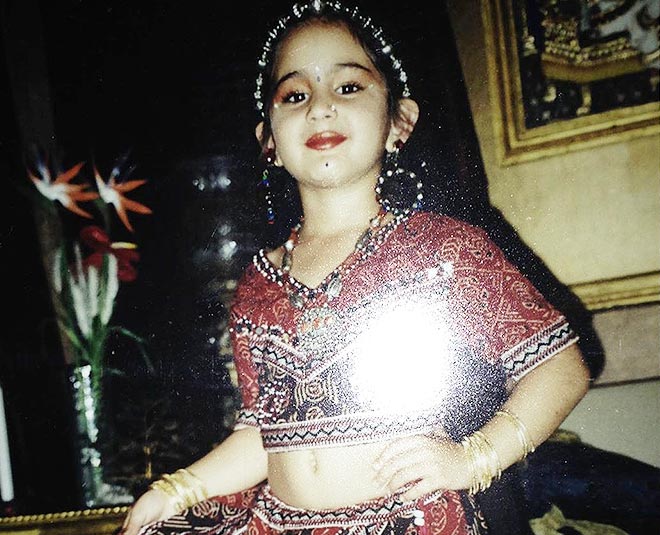 There is no denying that Sara Ali Khan is the favourite star kid on the block. The actress might be just two films old but she has already stole our hearts with her acting prowess, stunning looks, and witty nature. Recently, the star kid took to Instagram to treat her fans with some adorable childhood pictures and boy, she was a cutie patootie.

In the photos, Sara looks pretty in a red Rajasthani ghagra choli and seeing the photos, we are sure that she has realized her dream of becoming an actor at a very young age. Alongside the photos, Sara wrote, “Waiting for my shot since 2000 #apnatimeayega #tbt #sarakadrama.” Check out the photos below: 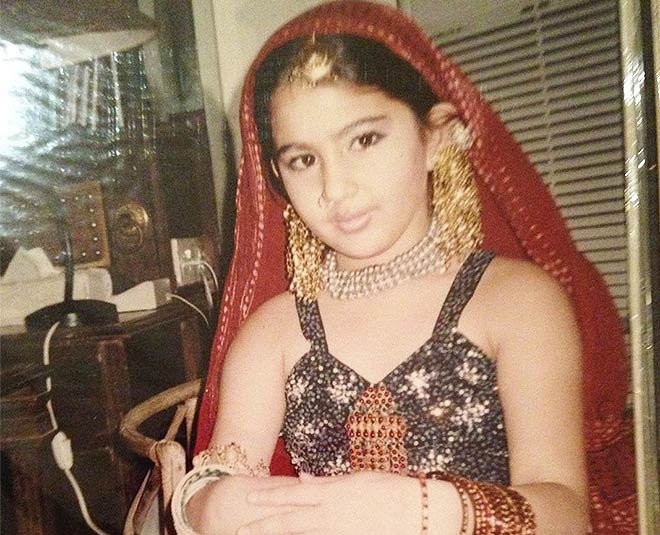 In an earlier interview with a news daily, Sara revealed how she always wanted to become an actress but choose to focus on studies as she was nerdy. She said, "Firstly, I was really fat and secondly, I was very nerdy, and the combination meant that I shouldn't be acting. So I used to keep studying."

On being asked about her first career choice, she revealed that she wanted to study medicine. ''When I finished the tenth grade, I was almost convinced that I wanted to do medicine. But the thing is that I have a mild tremor problem and I realised that I can't do surgery.'' ''So, I decided to do law and I studied History and Political Science. But then in my last year, I did an acting course,'' Khan added.

However, this isn't the first time that the Pataudi princess treated us with her throwback pictures. Check out some more pictures below: Sara shares a close bond with her dad, Saif Ali Khan, and this picture proves that she was her dad’s favourite since childhood. In this picture, we can see her sitting on Saif's lap and giving him popcorn. Aren't they cutest?!

Happy Fathers’ Day Abba ❤️🧸🤗👨‍👧🐥🐣🥇 Thank you for always being here for me, for being my partner on nerdy holidays, for teaching me how to read, for showing me my first rain and snow, for teaching me how to eat spaghetti and all the while remaining patient, loving and compassionate! #likefatherlikedaughter #daddysgirl #mymainman #handsomestman #partnerincrime

This is yet another picture which proves that Sara and Saif's relationship is filled with unconditional love. In this still, Sara and Saif can be seen kissing each other on lips!

During an interaction with VOGUE magazine, Sara spoke about her bond with Saif and said, "He’s a lot like me—we’re both readers, we both like history, we’re both travellers. He is 25 years older than me, which isn’t a lot. I am right in between the age gap of Taimur (Saif and Kareena’s son) and my father." And how can we miss this picture! The Pataudi princess shared this photo on her ‘first friend’ Vedika Pinto birthday and captioned it as, “Happiest birthday to my first friend Vedika Pinto. I’m so glad I stole your peppy. 22 years of theft later, I still laugh at you. Cakey makeup suits you #oldisgold #firstfriend.”

Talking about her professional diaries, Ms Khan made her Bollywood debut with Abhishek Kapoor’s Kedarnath opposite Sushant Singh Rajput. After that movie, she was seen romancing with Ranveer Singh in Rohit Shetty’s cop drama Simmba. Post that, Sara shot for Imtiaz Ali’s Aaj Kal opposite Kartik Aaryan and currently, she is busy shooting for David Dhawan’s Coolie No1 opposite Varun Dhawan.