Learn about the journey of  Bollywood actress Kangana Ranaut, who began as an ordinary small-town girl and recently received her fourth national award. 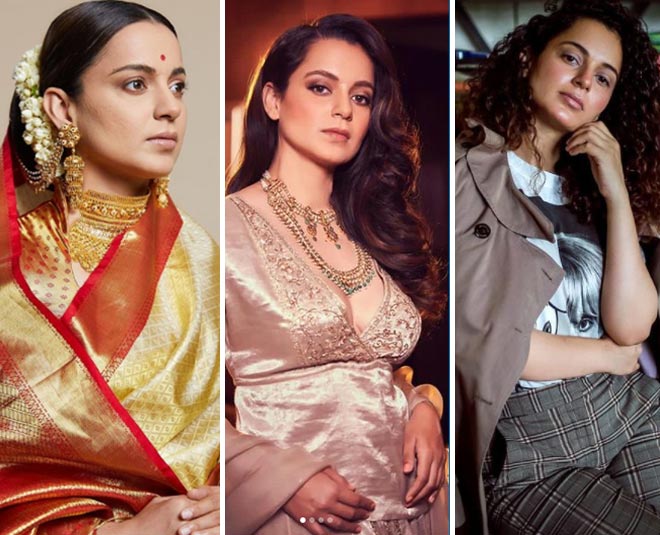 Bollywood queen Kangana Ranaut just took home her 4th National Award for two of her movie performances, Manikarnika - The Queen of Jhansi, which released in 2019 and Panga which released in 2020. The big success of the actress has impressed several people but not many know about the long road she had to travel to reach this point.

Today, the actress is one of the strongest known faces and among the highest paid actresses in the industry, but reaching this stage was not a smooth journey for her. Read on to know the rebellious journey of this four-time national winner, who started as a struggling outsider in the industry but has since risen to become one of the most well-known names. The actress was born in the Himachal Pradesh village of Bhambla, where she grew up in a joint family at their ancestral haveli. She was stubborn and rebellious from a young age, refusing to be discriminated against because of her gender. She would refuse if her father gave her a doll and her brother a plastic gun. The fight against gender discrimination is not new for her. The queen has been fighting this unfair practice since her childhood.

The actress did her schooling from the DAV School in Chandigarh where she was a very studious student.  Her parents insisted her to become a doctor, but after a failed chemistry unit test in the twelfth grade, she left that dream and began to reconsider her career options. She did not appear for the All India Pre Medical Test, despite having prepared for it. Her decision not to pursue medicine caused repeated squabbles with her parents, and her father refused to finance her any further, thinking her career path to be pointless. 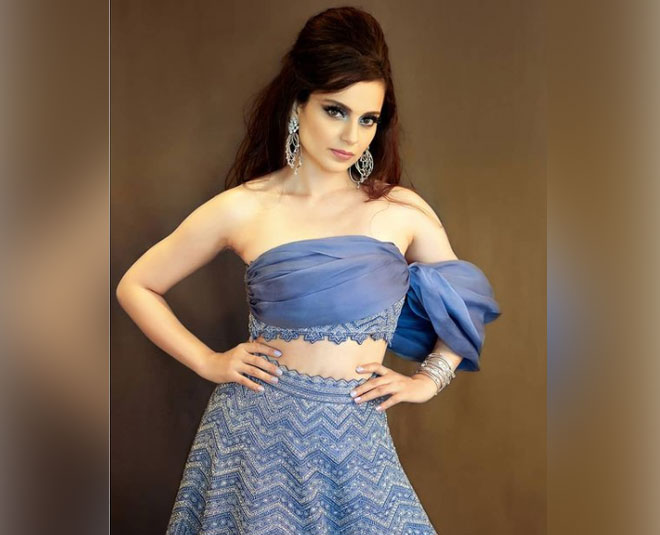 Kangana Ranaut relocated to Delhi at the early age of 16 with a determination to find her "space and freedom". While she was exploring her career choices, she was approached by the Elite Modelling Agency who were impressed by her looks and suggested she model for them. After doing a few modelling assignments, she left that and shifted towards acting, calling "no scope for creativity" in that field. She joined the Asmita Theatre Group, where she was trained under the theatre director Arvind Gaur.

She then participated in Gaur's theatre workshop at the India Habitat Centre, acted in several of his plays. Once, during a performance, one of the male actors went missing due to which Ranaut had to play his part along with her original role of a woman. This got her a lot of positive reaction from the audience which prompted her to relocate to Mumbai and pursue a career in film. She then enrolled herself for a four-month acting course in Asha Chandra's drama school. She had to face real struggles during this period. With her meager earnings and no financial help from family, she only ate "bread and achaar" for several days.

This period brough rift in the father-daughter relationship which she later regretted. Her relatives were not happy with her decision to enter the film-making industry, and they boycotted the actress for several years. She reconciled with them after the release of her bollywood movie, Life in a... Metro in 2007.

Kangana Ranaut's film debut was announced by the producers of the film I Love You Boss in 2004 for their movie. The next year, an agent took her to meet producer Mahesh Bhatt in his office, where she also interacted with the director Anurag Basu and auditioned for a lead role in the romantic thriller, Gangster. Watching her, Bhatt felt that she was too young for the part and instead casted Chitrangada Singh in it. However, Singh was later not available to do the film and Ranaut was contracted to fill in for the role. Kangana opted out of the movie, I Love You Boss and started working for Gangster. Released in 2006, Gangster emerged as a critical and commercial success which got Kangana huge appreciation by all for her remarkable debut performance. This movie won her Filmfare Award for Best Female Debut, along with various other debut awards.

In the same year, she appeared in the Mohit Suri-directed drama, Woh Lamhe. Kangana Ranaut portrayed actress Parveen Babi in the film, which she said left her emotionally exhausted. Sify's film critic Subhash K. Jha wrote that Ranaut is the first Bollywood actress since Smita Patil and Shabana Azmi "who isn't scared to strip her soul naked for the camera", and that she is a "hugely expressive actress with a phenomenal ability to convey torment, hurt, and incredulity through the eyes." Despite excellent reviews, the film did not perform well at the box office.

The following year, Ranaut appeared opposite Bobby Deol, Upen Patel, and Celina Jaitly in Suneel Darshan's musical thriller, Shakalaka Boom Boom. A feud between Ranaut and Darshan had marred the film's production where Kangana objected to her voice being dubbed by another artist. He insisted for a specific "twang and accent" for her character. The movie was a flop at the box office. Kangana then reconnected with Anurag Basu for a supporting role in the movie, Life in a... Metro, an ensemble drama. Despite a poor start at the box office, the movie turned out to be a profitable venture. Ranaut won the Stardust Award for Breakthrough Performance- female for her performance.

She next played a village girl in a Tamil romantic thriller, Dhaam Dhoom in 2008. A review wrote that Ranaut had "little scope" in the role which did not suit her.

Her next film, Fashion, was a career highlight for the actress. Her acting of a substance abusing supermodel, Shonali Gujral wowed everyone. Fashion was a commercial success with a worldwide revenue of ₹600 million. Ranaut's performance drew unanimous critical acclaim and won her several awards, including the National Film Award and Filmfare Award for Best Supporting Actress.

Following this, the actress went on to star in a number of films, including Raaz: The Mystery Continues, which was a box office success. Then she played the fiancée of Hrithik Roshan's character in Anurag Basu's romantic thriller Kites, which was released in 2010. The movie failed at the box office. She described herself as "cheated" after seeing the movie because her part turned out to be considerably smaller than she had told.

Once Upon a Time in Mumbaai of 2010 was a hit but Knock, released the same year, was a flop, followed by another flop, No Problem. She then finally saw her Hit in Anand L. Rai's Tanu Weds Manu, a romantic comedy in 2011 opposite R. Madhavan. Ranaut considered this film to be a game changer for her where she realized that she is capable of playing any roles as her character in the film was unlike any of those that she had played previously.

After the huge success of Tanu Weds Manu, the actress starred in Game, Double Dhamaal, Rascals and Miley Naa Miley Hum. Other than Double Dhamaal, all other films performed poorly. After this, Ranaut portrayed a supporting role opposite Ajay Devgn in an action thriller Tezz which turned out to be another box office flop. 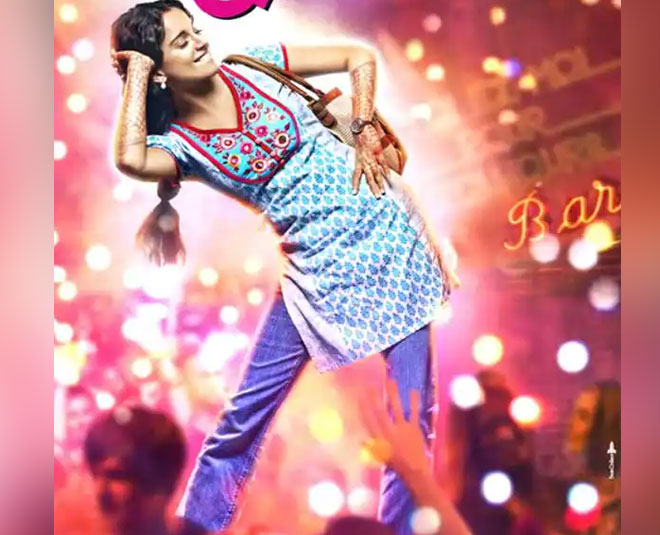 After this, the actress's career kept fluctuating, but the year 2014 was really special for the actress as she gave her superhit performance for the movie Queen, a coming-of-age dramedy. It was a women-centric film with a strong message. The film emerged as a box office hit which won her both the Filmfare Award and the National Film Award for Best Actress. But followed by a few more flop movies. The next big success for the actress was Tanu Weds Manu: Returns in the year 2015. The film received several positive reviews from critics and Kangana's performance was considered its prime asset. The movie earned over ₹2.4 billion worldwide, becoming the highest grossing Bollywood film which featured a female protagonist. Ranaut won a Filmfare Critics Award and second consecutive National Film Award for the Best Actress, as well as received an additional Best Actress nomination at Filmfare.

After this movie, in 2015, she appeared in two romantic comedies, I Love NY and Katti Batti, both of which failed at box office.

Kangana made her directing debut in 2011 with the English short film, The Touch. The storey revolved around a four-year-old boy's relationship with a dog. Kangana Ranaut worked on the screenplay with an Australian writer, and the movie was filmed in the United States.

Kangana Ranaut returned to the cinema after a year long break in 2017 with Vishal Bhardwaj's romantic drama Rangoon. Rangoon was met with mixed reviews, but Ranaut's acting was praised. In the same year, Ranaut starred in Hansal Mehta's criminal comedy Simran. The film received mixed reviews and was a commercial failure once again.

After numerous commercial failures, she starred as a titular warrior in her co-directed biopic Manikarnika: The Queen of Jhansi  in 2019, which was followed by a role as a kabbadi player in the sports film Panga in 2020. For these two performances, she recently received her fourth National Film Award. In 2020, Kangana Ranaut launched her own production company called "Manikarnika Films" under which she will work as director and producer.

Kangana Ranaut's latest film, Thalaivi released recently. Thalaivi is a biopic based on Jayalalithaa's life story. She will next be seen in a spy thriller film, Dhaakad, which is releasing on April 8, 2022. The actress had to undergo incredible transformations in both the movies.

Ranaut had a relationship with co-star Adhyayan Suman while filming Raaz: The Mystery Continues in 2008. The couple separated the next year, due to Suman's insistence who wanted to focus on his professional career.

From 2010 to 2012, Ranaut had a long-distance relationship with Nicholas Lafferty, an English doctor; she regarded the relationship as "the most normal" she had ever had. But the couple split soon after amicably as she was not ready for marriage. She has since stated that she will never marry and that she does not want to be bound by a relationship.

In 2016, Kangana Ranaut's co-star from Krrish 3, Hritik Roshan filed a complaint against her, alleging cyber stalking and harassment. Ranaut filed a counter-charge against Roshan, stating that his case was an attempt to hide their affair for the sake of his divorce procedures. Due to a lack of evidence, the case was closed later that year.

Ever since Kangana started her career, she has been involved in making headlines for some or the other reason. In the initial days of her bollywood career, she was often made fun of because of her poor English. Not only this, her personal life has also always remained in the headlines. From her affairs to giving bold and strong statements, her name has always been in the news.

Don't miss: All About Hrithik-Kangana Controversy, Through A Face Reader’s Lens

Kangana identifies with the right-wing ideology. She is a supporter of Bharatiya Janata Party and Prime Minister Narendra Modi. She often makes comments on social media and often expresses her political views. Recently, Kangana has also become the brand ambassador of the Uttar Pradesh government's ambitious scheme 'One District One Product' (ODOP).

Starting from a small town, the rebellious actress has come a long way.