After Sara Ali Khan shared a fun video with Amrita Singh & brother, another TikTok video of Ibrahim is going viral on social media. Check out! 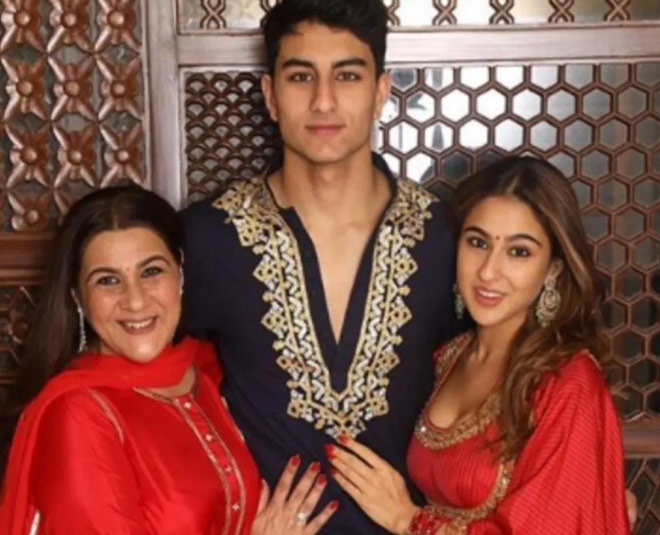 Love Aaj Kal actress Sara Ali Khan and brother Ibrahim have been spending their self-isolation period together amid the coronavirus lockdown. From cracking jokes to pulling each other’s legs, the adorable sibling duo has been sharing glimpses of their quarantine diaries where they are seen making the most of their time. While Sara Ali Khan is already a star and has made her Bollywood debut, Ibrahim is currently pursuing his studies. However, being from a family of actors like Sharmila Tagore, Saif Ali Khan, Amrita Singh, and Soha Ali Khan, looks like Ibrahim Ali is ready to step into movies.

Recently, Ibrahim took to his Instagram and posted a hilarious TikTok video, wherein he played a double role of two men who have lost their wives and are trying to find them. Check out the fun video here:

This is a fun video in dual role played by #ibrahimalikhan 😜🔥

Seeing the video of Ibrahim pulling off both roles so effortlessly, netzines couldn’t stop laughing on his performance and wanted to know when will he make his Bollywood debut.

Don't Miss: Sara Ali Khan Just Took Us Through 'Banaras Ki Galliya' And The Destination Is Next On Our Bucket List

Meanwhile, last evening, Ibrahim, Sara, and Amrita Singh took the ‘Who Is The Most Likely’ challenge and spilled the beans on who's likely to get arrested or who is more courageous.

In the video, the trio looked stunning as ever. They played the fun challenge and also agreed that Amrita is the most courageous of the three, while Sara is the rebel child. Next, they answered who is most likely to get arrested, to this, Sara and Amrita pointed at each other while Ibrahim thinks it’s him. Check out the funny video below:

This is the coolest family past time ❤ #SaraAliKhan #ibrahimalikhan and yes surprisingly mom too takes the test. Awesome 🔥🔥🔥

On the professional front, Ibrahim is yet to make his Bollywood debut.

Sara, on the other hand, was last seen in Love Aaj Kal which received mixed responses from the audience. Love Aaj Kal was a remake of an old movie of the same name and also starred Kartik Aaryan in the lead role. Sara has a couple of films in the pipeline. She will next be seen in David Dhawan’s Coolie No 1, in which she will co-star with Varun Dhawan. The film was supposed to release on May 1, 2020. However, owing to the lockdown extension until May 3, the release date has been postponed. Apart from this, she will also be seen in Atrangi Re.