Debina Bonerjee and Gurmeet Chodhary's traditional Bengali wedding surface the internet and we are loving it.

Gurmeet Chodhary and Debina Bonnerjee are one of the most loved television Jodi and the couple never fails to give us major couple goals. The couple fell in love on the sets of the show Mr and Mrs Bollywood and got married in a private ceremony on 15th February, 2011 and since then, they have given us major couple goals.

They are often seen spending time together doing just little things like grocery shopping and coffee dates with their dog. But this time they have gone over the top as their latest pictures in traditional Bengali attire surface the internet.

The couple recently shared snippets on Instagram of the wedding of their dreams where they are seen in traditional Bengali attire. They surprised their fans with these pictures on their social media handles. Both of them used similar captions which was just one word, ‘finally’.

It is said that both of them have always wished to have a wedding with proper Bengali rituals. However, they didn’t get a chance for so long but this time, their wish came true as they married in proper Bengali style in Kolkata (Why you should visit Kolkata), the actress’ hometown.

In the pictures shared by Debina and Gurmeet, they are dressed in proper Bengali wedding attire. Debina is looking like a perfect Bengali bride in her red banarasi saree and traditional Bengali jewellery and makeup. Gurmeet perfectly complemented her in a kurta-dhoti combo. Both of them were also wearing the traditional mukuts wore by a Bengali bride and groom.

It was their wish to get married in a proper Bengali way since they had a small wedding in a temple ten years ago. Going by the images, we can make out that this was a pretty big affair and the couple seems to be over the moon on their big day. 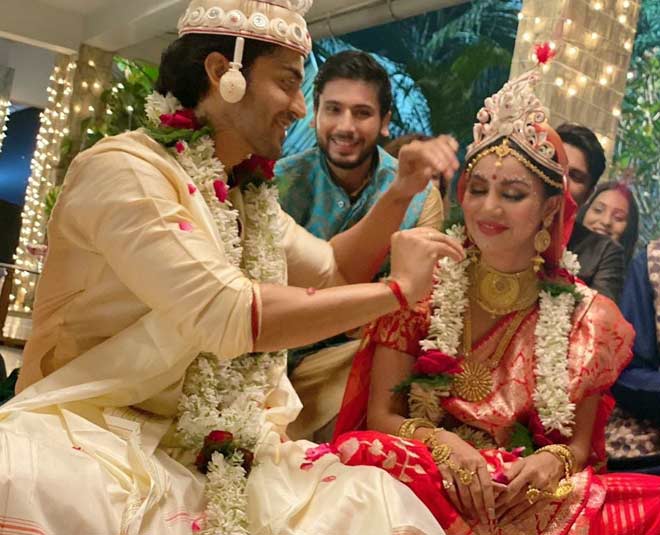 In the pictures shared by the couple, they can be seen sneaking up a loved up moment at the wedding. In the comments section, Mouni Roy showered the couple with congratulatory messages and a cluster of red hearts.

Don't Miss: As Neha Dhupia Gave Birth To A Baby Boy, Have A Look At Celebs Who Were Blessed With A Baby Boy This Year

Debina Banerjee and Gurmeet Chodhary also indulged in the modern wedding tradition, pre-wedding photoshoot at what appears to be Kolkata’s Princep Ghat area.

On the work front, Debina Bonnerjee and Gurmeet Choudhary have together worked on Anant Sagar’s television show Ramayan where they were cast as Sita and Ram. The show ran between 2008 and 2009. They have also appeared in a reality television show together – Pati, Patni aur Woh.