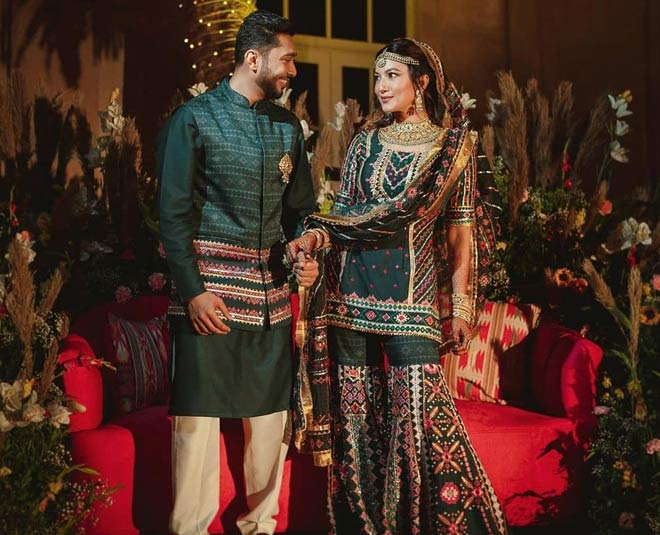 Gauahar Khan got married to beau Zaid Darbar on 25th December. After their Nikaah ceremony in the morning, the couple hosted a wedding reception. While the wedding ceremony was attended by only close friends and family, the wedding reception saw Zaid and Gauahar's friends and family from the showbiz world in attendance. Hussain Kuwajerwala, Gautam Rode, Sanjay Leela Bhansali, Manish Malhotra were on the guest list.

An adorable video of Gauahar and Zaid performing to the former's track 'Jhalla Wallah' from her movie Ishaqzaade is getting a lot of love on the internet. Have a look.

A post shared by The House of Tag. (@houseoftag_official)

Gauahar Khan's friend Preeti Simoes was also seen performing on the same track. Gauahar Khan later joined her on the floor. Preeti Simoes took to her Instagram handle and posted the dance video. She captioned it, "The bestest night ever ... my Knight in Shining Armour ...@gauaharkhan. Wen u cud not rehearse for a dance performance and got major #Fomo ..so u decide u get on stage for an impromptu act .. And jus wen u r makin a fool of urself ... ur best friend who is also a bride comes to ur rescue..... thanks for saving me G."

The newlywed Gauahar and Zaid performed on a couple of songs on their wedding night. The two first dance to the track 'Tumse Milke'. Have a look:

The two also performed to the theme song of their wedding 'Gazab Ka Hai Din'.

Among all the other videos going viral on social media, this is getting so much love. In the video, Gauahar Khan can be seen setting Zaid's face with a beauty blender. Well, how adorable is the bride taking care of her groom-to-be, ensuring his makeup is just on point. Here is the video:

Gauahar Khan and Zaid Darbar's pre-wedding festivities began with the Chiksa ceremony and was followed by mehendi and haldi ceremony.

The two earlier shared a digital invite on their Instagram handle which took us through their lockdown love story. They first met while shopping for groceries, soon they started to exchange texts. Their date nights were all about quarantine drives and parking garages as per the video.

Talking about meeting Zaid and taking it all forward to marriage, Gauahar Khan in an interview said, “I met him, we hit it off and he didn’t think he would propose to someone, marriage was not on his mind. When he asked me, it wasn’t planned. It was in a flow and after meeting me, in literally over a month, he proposed to me. There were no second thoughts.”

While Gauahar Khan is a popular face of the Bollywood world, Zaid Darbar is an actor, dancer, and social media influencer. For those who don't know, he is the son of music composer Ismail Darbar. We wish the two a happy married life ahead! For more stories on Gauahar Khan and Zaid Darbar, stay tuned!