Alia And Ranbir Getting Married? First Picture Of Their Wedding Card Goes Viral

Picture of Alia and Ranbir's wedding cards are out on the internet. Are these real? Read on. 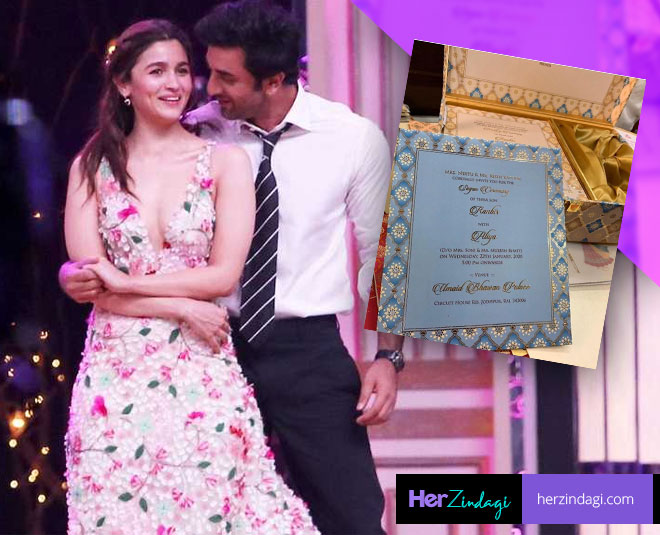 Who isn't aware of Ranbir Kapoor and Alia Bhatt's on-going phase of love? The two are much in love and on various occasions, we have got a proof of it. Recently, Alia Bhatt was even vocal about her love for Ranbir on one of the award shows.

Alia Bhatt and Ranbir Kapoor's romance is one of the most talked-about things in the B-town today. The reports suggest that the two are in a relationship and will soon tie the knot.

Well, amidst all these rumours, a wedding card of Ranbir and Alia has started doing rounds on the internet. This card is all over social media. As per this wedding card, the two are getting engaged on 22nd January 2020. Surely, this is big news for all Ranbir and Alia fans but is this real? Read on.

Have a look at the card:

Before you think anything, this card is fake. This is a fake engagement invite that is circulating all over the internet. Alia's source confirmed that the invite is fake and there is no such announcement made by the actors.

What's more interesting here is that there are so many errors in the invite. Alia's name has been spelled incorrectly on the card. The card reads her name as Aliya. Also, Alia is the daughter of Mahesh Bhatt but the card reads Mukesh Bhatt.

The date of engagement has been mentioned as 22th January which is again incorrect and it should 22nd January.

Ranbir and Alia may not confirm their relationship but a lot of things clear the air for us. For instance, the two went for a holiday to Kenya together recently. A picture from their African safari went viral.

Also, how can we forget the day when Alia declared her love for Ranbir Kapoor at the Filmfare Awards. After bagging the best actor award, Alia gave her winning speech and it also had a mention of her boyfriend Ranbir Kapoor. She said, "Meghna [Director Meghna Gulzar], for me, 'Raazi' is you, your blood and sweat. You are my main chick. Vicky [Kaushal], without you, the film wouldn’t be complete. Thank you, my mentor, Karan for being my mentor, father and my fashion police. Tonight is all about love; there, my special one, I love you Ranbir."

While there have been a lot of reports of the two getting married in the past, looks like the two aren't ready yet. In an interview, Alia Bhatt talking about her marriage said, "I’m too young to think about it. When I feel there’s a need to be in a stronger bond with him, we will come to it. But right now, I’m married to my work and I also have my relationship going well on the side."

Ranbir and Alia are dating each other but none of them confirmed it in public. The two will be next seen in Ayan Mukerji's Brahmastra.