Ranbir Kapoor and Alia Bhatt were seen cuddling together at her BFF's Akansha Ranjan’s birthday bash. 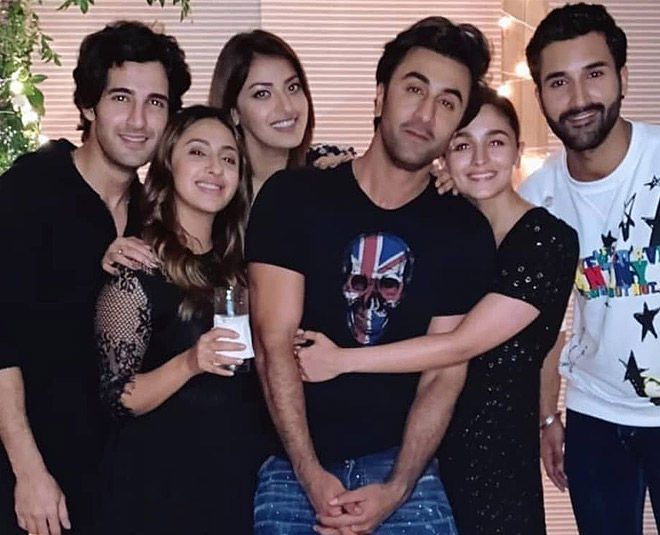 Alia Bhatt and Ranbir Kapoor are undoubtedly one of the most adored couples of Tinsel Town. Ever since they revealed about their relationship, the two have been swooning us with their social media PDA. Be it stepping out for a movie date or making a grand entry at an event, 'Raila' often makes our heart flutter with their mushy love. On Ranbir Kapoor's Birthday, we would like to take this moment to hail the cute couple, Alia's obvious love for the actor.

Recently, the lovebirds were clicked together at Alia's BFF Akansha Ranjan’s birthday bash. In the picture, Alia is seen hugging Ranbir and this made our hearts flutter! The couple looked madly in love in the picture as they were seen standing with Student of the Year 2 star Aditya Seal, Gurfateh Singh Pirzada and Anushka Ranjan apart from birthday girl Akansha.

For the evening, Alia donned a black dress, with flowery pattern all over it. With big hoop earring and nude makeup, Alia rounded off her look with a messy bun. The actress looked ravishing in the images shared online. On the other hand, Ranbir Kapoor looked dapper in a blue, chequered shirt, teamed up with denim. Check out the images from Akansha's birthday party in Mumbai here:

Don't Miss: Ranbir And Alia Are Painting The Town Red With Their Kenya Trip pics

Ranbir and Alia were recently on a holiday in Kenya. Though they did not share any pictures from their trip, a paparazzi page posted photos of the couple dressed in safari gear.

Thank you Rabeeca Hameed our follower from Kenya for this cool capture of love birds #aliabhatt #ranbirkapoor ❤❤. I'm sure we will get too see what Alia captured on her Instagram. #viralbhayani @viralbhayani

On the work front, the duo will next be seen together in Ayan Mukherji’s upcoming film ‘Brahmastra’ which also stars Amitabh  Bachchan and Mouni Roy in pivotal roles. Apart from that, Alia has Sadak 2, RRR and Takht in her kitty.