We Already Know Who Is Winning Bigg Boss 14, All Thanks To Google!

With the grand finale of Bigg Boss 14 happening right now, we are all waiting for that final moment to know who will take home the trophy this year. Bigg Boss 14 Grand Finale is about to be over and the winner shall soon be announced. As per some sources, Rubina Dilaik is the winner but in this mad house of uncertainty and twists and turns, anything can happen at the last minute. We have Rahul and Rubina battling it out, all expectations based on the votes.

Interestingly, Google already has the name of the winner of Bigg Boss season 14. Have a look: 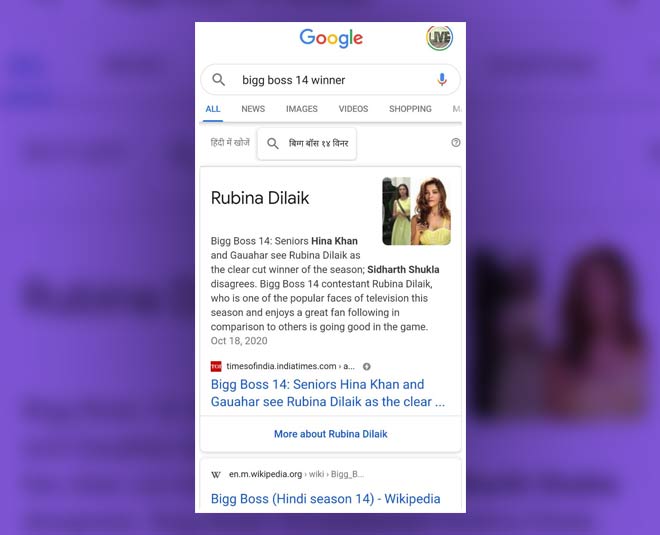 Will Rubina Dilaik Be The Winner Of Bigg Boss 14?

Rubina Dilaik is one of the most talked-about contestants on the show this season. Ever since Rubina Dilaik entered the Bigg Boss house, she has been entertaining us, be it with her funny antics or her chemistry with husband Abhinav Shukla. Initially, Rubina Dilaik got into ugly arguments with the host of the show, Salman Khan. She even when on to complain against him to Bigg Boss when he once used the word 'saaman' for her husband Abhinav Shukla which clearly didn't go down well with her. Recently, she also got slammed by the host for targetting Arshi Khan and using wrong gestures to tease her inside the Bigg Boss house.

On various occasions, Rubina Dilaik has proven herself to be a strong headed, opinionated contestant inside the Bigg Boss house. Well, as much as we have seen through the years, contestants like her have always managed to take home the trophy.

Let us also tell you that the Toofani seniors this season, Hina Khan and Gauahar Khan strongly felt that Rubina Dilaik would be a clear winner of the show.

Rakhi Sawant, Aly Goni And Nikki Tamboli Out Of Race Who do you think will manage to win the show this year? Share your thoughts with us! For more such stories on Bigg Boss 14, stay tuned.