Use These 5 Tips To Prevent Your Milk From Boiling Over

Do you face the problem of milk boiling over quite often? With the given tips you can easily save yourselves from the mess of boiled over milk. 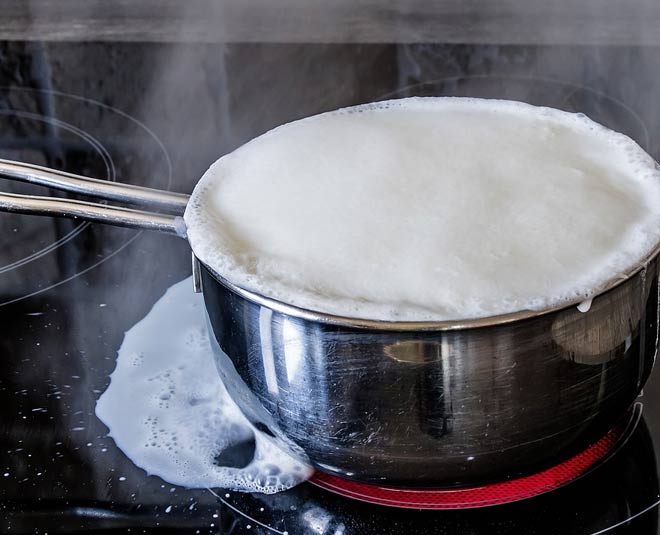 No matter how closely you watch the milk while it is boiling, just a second of distraction can make it boil all over the stove. What follows is a big mess, which becomes very hard to clean. The overflowing milk seeps through your stove and spreads all over your kitchen slab. In order to prevent such a scenario, follow the below given tips, which will prevent the milk from spilling out from the vessel.

Rubbing Butter On The Rim One way to avoid  the overflowing disaster is by using butter to grease the vessel you are using to boil milk. Take a cube of butter and rub it all over the rim and a bit towards the inside as well. Now pour your milk in the vessel and keep it on the flame. This easy trick is not only easy to do but also saves the milk from over-boiling or burning. Make sure you don’t use butter in large quantities, use just enough to lightly grease the sides.

Nowadays spill stoppers are available in the market, which are quite handy when it comes to putting an end to the boiling problems. They are basically silicone-based rubber discs which can be used to cover the boiling pot. Just stretch the spill stopper and fit it properly on the sides of the vessel. It will contain the boiled milk in the middle and will not let it overflow. As it is made of silicone, it will neither melt nor harm the quality of your milk.

Sprinkle Water On The Foam At times, even after slowing down the flame your milk might spill over. The best way to prevent this situation is to sprinkle a few drops of water on the foam. As soon as you sprinkle water on the foam, the boiling milk will go down the vessel. Make sure you don't go overboard with sprinkling and do so only with a few drops of water. You can use this trick if you wish to boil your milk on low flame for some more time.

Don't Miss: Tips To Keep In Mind While Defrosting Your Freezer

Another easy trick is to keep a wooden spatula on the vessel. Place it in such a way that the spatula is in the middle and rests on the sides of the milk pot. This wooden ladle acts as a security valve, even if the milk boils, the ladle will prevent it from spilling over. Make sure you keep stirring the milk in between and only keep the ladle after you see small bubbles forming in the milk.

This method is often used to melt chocolate or butter without burning it. What you need to do is keep a big vessel and fill 1/4th of it with water. Now switch on the flame and let the water boil. Once it starts boiling, place your milk pot in it. Now let your milk boil at its own pace. This method might take more time than usual but will ensure that your milk doesn’t spill out. Make sure the vessel kept directly on the flame is bigger than your milk pot.

The above given tips will make sure that your milk doesn’t over-boil and will also ease you from the tension of watching the milk while it boils.

For more such tips and hacks, stay tuned to HerZindagi.com