Sara Tendulkar Looks Stunning As She Makes Her Modelling Debut Master Blaster Sachin Tendulkar's daughter Sara Tendulkar is always making headlines for some reason or the other. The diva is quite popular on social media and has over 1 million followers on her Instagram.

This time, Sara Tendulkar is making headlines for her modelling debut. She made her debut along with actress Banita Sandhu and Tania Shroff.

Sara Tendulkar made her modelling debut with a clothing brand. In her advertisement video, Sara Tendulkar was seen sharing space with Banita Sandhu and Tania Shroff.

Banita Sandhu is a Welsh actress who made her debut in Bollywood with Varun Dhawan starrer October in the year 2018. She was next seen in an American science fiction series, Pandora in the year 2019. She was last seen in the movie Sardar Udham which starred Vicky Kaushal in the lead.

Tania Shroff is the daughter of Jaidev Shroff who is a Mumbai based industrialist and businessman. Reportedly, Tania Shroff is dating Suniel Shetty and Mana Shetty's son, Ahan Shetty. Ahan Shetty recently made his Bollywood debut with Tadap opposite Tara Sutaria. 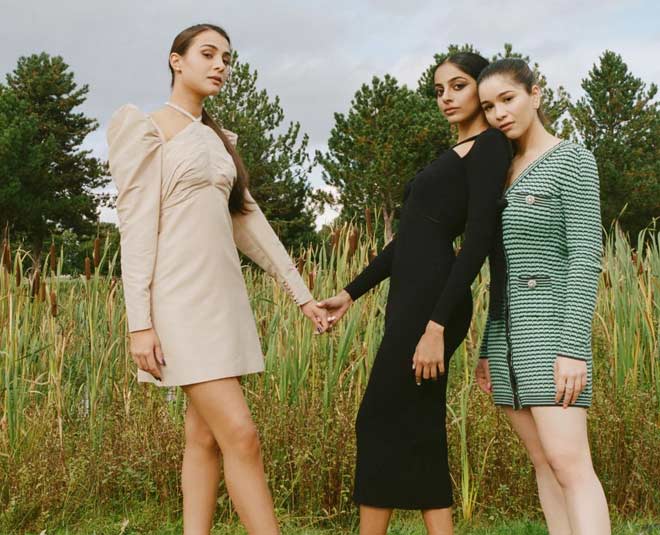 As the video introduces the trio, they can be seen posing individually in chich western wear. Sara Tendulkar made her debut with the clothing brand, Self Portrait which has flagship stores in London, Bangkok, Taipei, Beijing and Shanghai.

This time, she is making headlines for her modelling debut. She made her debut along with actress Banita Sandhu and Tania Shroff. The campaign is titled Self Portrait. The ad campaign is for Ajio's high end fashion division, Ajio Luxe.

In another picture shared by the brand, Ajio Luxe, Sara Tendulkar can be seen dressed up in a mustard ruffle dress with a stylish pair of white heels. Her hair can be seen tied in a messy bun.

Sara Tendulkar flew off to London for her graduation after completing her schooling from Mumbai's Dhirubhai Ambani International School. She is currently a student at University College London.

Don't Miss: Sachin Tendulkar's Daughter Sara Tendulkar Is A Diva In Making & These Pics Are Proof Of The Same!

There have been rumours of Sara Tendulkar dating team India and Kolkata Knight Riders batsman, Shubham Gill for the longest time now. Though they have never really accepted or denied their relationship rumours, Shubham Gill and Sara Tendulkar are making headlines every now and then.

What first fueled their dating rumours was Sara Tendulkar sharing a picture from KKR match on her Instagram handle and adding some heart GIFs to it. Shubham Gill was one of the best perfomers of the match and even won the 'Emerging Performer Of The Year' award.

Later, Sara Tendulkar once congrtulated him on one of his Instagram posts and he replied, "thanks a lot" with a heart emoji. Indian team player Hardik Pandya replied to their comment thread. He wrote, he tagged Shubham Gill and wrote, "most welcome from her."

However, when Shubham Gill was asked by one of his followers if he was single. He replied that he is very much single and has no plans to get into a romantic relationship in near future.

Well, Sara Tendulkar hasn't really spoken about her relationship status. Let's wait and see if the rumours are true or not!

Coming back to Sara Tendulkar's modelling debut, what are  your thoughts? Share with us on our Facebook page. For more such stories, stay tuned!