Anushka Sharma entrusted Sabyasachi Mukherjee for her wedding outfits. But what was so special about her D-day attire? Read on. 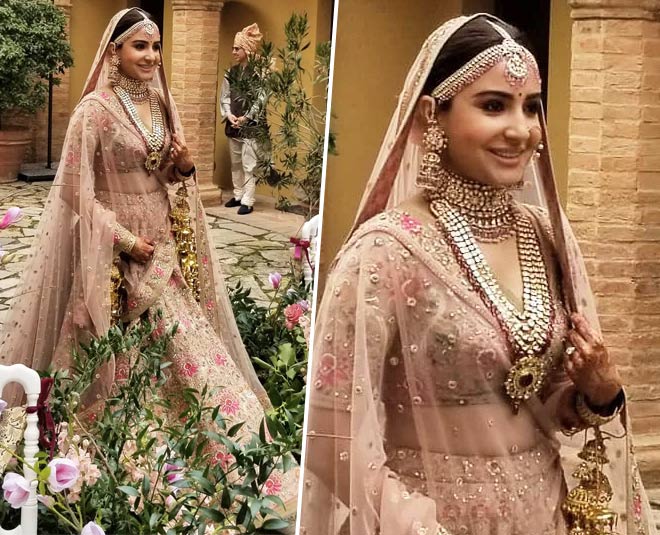 Anushka Sharma and Virat Kohli's intimate wedding in Tuscany, Italy became the talk of the town back in 2017. When the pictures first went viral on social media, the serene setting of their D-day melted our hearts and all of us dreamt of having a hush-hush wedding like theirs. Well, that's not all, what all won our hearts was Anushka Sharma's bridal avatar.

For her day wedding ceremony, Anushka Sharma walked the aisle in a floral lehenga from the house of Sabyasachi Mukherjee. Just like all the creations by the ace designer, this one too stood out for its intricate work. Let's quickly take you through the detailing of her beautiful wedding lehenga. Anushka Sharma's pale blush pink silk lehenga came with hand-embroidered Indian lotus motifs that were merged with European flora and fauna. The lehenga was also encrusted with pink rhinestones. Her lehenga was handcrafted in silk floss, gold, and silver 'tilla' work. The metal threads, pearls, and beads used on her floral lehenga are known as Renaissance embroidery. It took 32 days and 67 karigars to finish her wedding lehenga. In an interview, designer Sabyasachi Mukherjee spoke on curating Anushka Sharma's wedding look. He said, “Anushka was to get married in Florence and her lehenga just had to fit in. So they chose a colour that would blend in with the whimsical Tuscan surrounding rather than stand out. It was blush pink with tropical flora and fauna, hand-embroidered in silk floss. Exotic birds and butterflies were rendered with the finest quality needlecraft. It took 67 karigars, 32 days to complete the ensemble. To complement her lehenga, beautiful jadau jewellery was handcrafted in uncut diamonds, pearls and pale pink spinel.” What added more to Anushka Sharma's wedding look was her traditional jewellery from the house of Sabyasachi Mukherjee. She wore a mathapatti, a statement choker, rani haar, and matching jhumkas, all in jadau, pearls, and pink spinel. In an interview, Anushka Sharma talked about the specific details she wanted about her wedding wear. When she met the ace designer she was specific about two things and her attire was curated exactly the way she wished. She said, “When I met Sabyasachi [Mukherjee] I told him very clearly that for my wedding look I wanted to go with pale pink. I didn’t want to do a traditional red because it was a day wedding. I envisioned pastel colours, flowers. The vibe was such—not too much”.

Don't Miss: Sabyasachi's Latest Jewellery Collection Is What We Need In Our Stash Right Now!

Not just Anushka Sharma, her groom, Virat Kohli too trusted Sabyasachi Mukherjee for his wedding wardrobe. All those who follow Anushka Sharma closely know that Sabyasachi is her go-to designer and honestly we love it! Every time she steps out in a creation by the coutourier, she never disappoints the fashion police.

If you are a bride-to-be, looking for your bridal lehenga then Anushka Sharma's pale pink lehenga deserves your attention. This one needs to be bookmarked if you don't wish to go for a traditional red lehenga. Also, if you want your lehenga to stand out, do pay attention to the embroidery. For more stories around bridal wear, stay tuned!