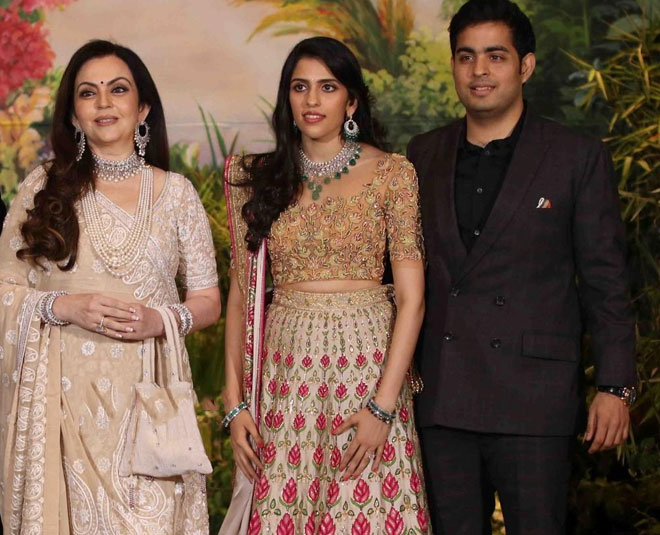 Where most of our celebrities are active on social media, there are still some celebs who choose to stay away from it. Nita Ambani's bahu and Akash Ambani's wife, Shloka Mehta may not be on any social media platform officially, but let us tell you, she is there on Instagram, at least!

Recently, ace designer, Sabyasachi Mukherjee revealed Shloka Mehta's secret Instagram account by tagging her in a post. The high-end clothing brand posted a picture of her from Armaan Jain's wedding with a caption, "Shloka Mehta Ambani @shloka11 in Sabyasachi.” It is a non-verified account which is followed by several Bollywood A-listers.

A post shared by Sabyasachi Mukherjee (@sabyasachiofficial) onFeb 6, 2020 at 3:36am PST

In the pictures, Shloka Mehta can be seen decked up in a lehenga skirt featuring multiple shades of pink and Mukherjee’s signature patchwork border. Adding more glamour to her look, she paired her lehenga skirt with an emerald green blouse and sheer dupatta in a bright shade of orange.

A post shared by Sabyasachi Mukherjee (@sabyasachiofficial) onFeb 6, 2020 at 3:52am PST

Shloka accessorised her outfit with one of the diamond and emerald necklaces that she wore on her wedding day, a delicate maang tikka, simple uncut diamond earrings, and emerald-embellished bangles. Glossy nude lips, winged liner, and a low bun rounded off her look.

And that's not all. The designer also exposed Anant Ambani's rumoured girlfriend, Radhika Merchant's Instagram account. For Isha Ambani and Anand Piramal's wedding, Radhika was seen wearing a mint-green lehenga by the ace designer Sabyasachi. With loose curls, she styled her look with a simple maang tikka, bangles, and a chunky choker necklace. The high-end clothing brand Sabyasachi's official account posted a picture of her with a caption and tagged Radhika in it. The caption reads, "Radhika Merchant @radhikamerchant in Sabyasachi." Don't believe us? Check it out yourself.

A post shared by Sabyasachi Mukherjee (@sabyasachiofficial) onJan 19, 2019 at 2:43am PST And that is where Shloka Mehta's and Radhika Merchant's secret account were exposed for netizens. These private accounts were also followed by Rhea Kapoor, Manish Malhotra, Priyanka Chopra and many A-lister celebs around the world.

Well, we are super excited to see them on Instagram, what about you? Tell us in the comments and stay tuned to HerZindagi for more such articles.