Indian Journalist Jumps Into Protest To Save Tricolour 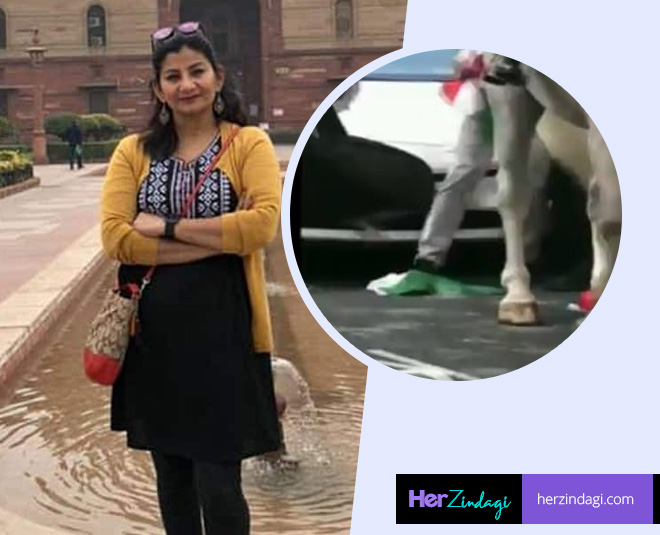 As journalists, we are expected to be unbiased at all times and not to react to anything and report events as they happen. But what if someone vandalizes your national flag, unleashes their disrespect towards it and makes it look like nothing more than a piece of cloth? Will you still be able to be a mute spectator and turn a blind eye? The answer will be an absolute no. No matter the job profile, it's our integrity and nationalism that we should not compromise on. Recently a journalist, Poonam Joshi, did something similar.

On August 15, Poonam Joshi was covering the celebration of India’s Independence Day outside Indian High Commission in London, where thousands of Pro-Khalistan and Pro-Pakistanis were protesting against PM Modi’s decision to scrap Article 370.

Poonam saw a Khalistani supporter making his way to where a group of Indians was standing. He then managed to grab an Indian flag and threw it over to the side where Pakistan supporters stood and returned to his cohorts.

The journalist couldn’t withstand it and she bravely went up to the hundreds of demonstrators who were mutilating the flag, snatched the tricolour from the man’s hand and brought it back to the Indian side. "When I saw a bunch of Pakistani hooligans snatch our Indian flag from the Indian side and threw it on the Pakistan side, then I saw it being torn and being beaten with shoes. Even though as a journalist I could not get involved in the protest in any way but my blood boiled seeing the pride of my nation, my beloved Indian flag being treated like this. I went in, grabbed our flag from under their feet and their hands", Poonam Joshi wrote on her Facebook page.

I hv reported these hooligans 2 UK police @metpoliceuk. I wud like 2 see wht action thy take 2 address my report. I wud request all Indians living in UK 2 report too. Tell thm about the destress thts caused due 2 their actions. My ref 32114 19/8/2019 Share ur CAD no. #Unite4India pic.twitter.com/Q61dCGLk0g

As soon as this video went viral, people started hailing Poonam Joshi for her courage and putting a brave foot forward to stop the protestors from destroying the Indian flag.

Proud of the brave @ANI journalist Poonam Joshi, who stood up against anti-India forces in London and saved the pride and dignity of India and Indian Tricolor.
Salutes.#PoonamJoshi https://t.co/qfEwtkkvKl