A Heavy Zardozi and Jadau work lehenga in ruby red and gold was what Ambani Bahu, Shloka decided to wear for the wedding

Hitched! Akash Ambani and Shloka Mehta are man and wife now. It was a grand wedding at Mumbai’s Jio World Centre. The bride, Shloka Mehta made a regal entrance under a dazzling red Chaadar with notes of a Lakshmi Bhajan filling the air waves. Grace personified, Shloka stood out in a ruby red Abu Jani Sandeep Khosla bridal lehenga. As she walked into the mandap, a cascading red drape over her head, she looked breathtakingly beautiful. Akash Ambani sure missed a heartbeat when he laid eyes on his bride and then endearingly bent and gave Shloka a smile that she would treasure. The groom, who had been wearing a pink sherwani for his baraat, changed into a cream sherwani with gold antique work, to match the red and gold look of his bride. 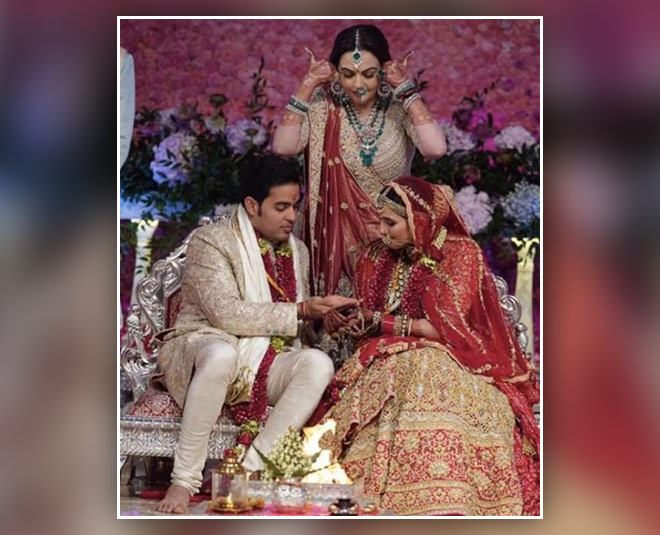 Shloka’s lehenga was an intricate work of art by the designer duo, Abu Jani and Sandeep Khosla. The bridal lehenga had cut work jaali in zardozi with jadau hand embroidery. The heavy embroidery in the skirt made it look predominantly cream-gold and it was beautifully offset with her blouse which was embellished with zardozi work and jadau.

Shloka carried two dupattas - the sheer red dupatta over her head had well-spaced out gold embroidered flower tendrils. The lehenga was reflective of Shloka Mehta’s coy personality, elegant without being garish. 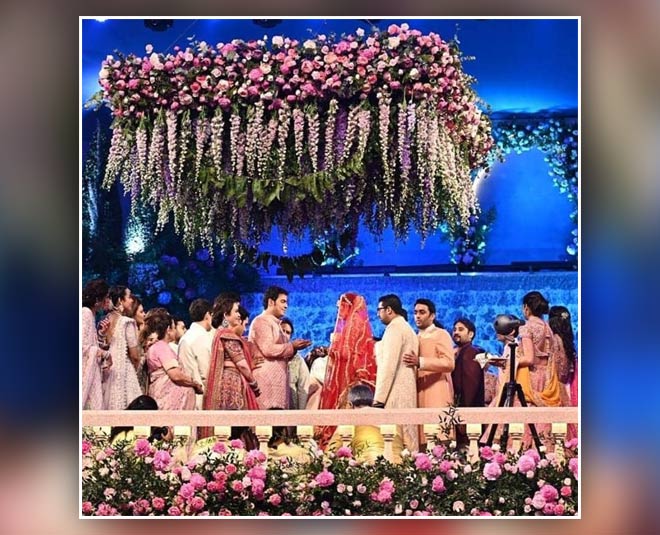 The bridal look was rounded off with heavy jadau emerald necklaces, a statement kundan choker piece and a long polki and emerald necklace. Shloka wore a mathapatti and a heavy nose ring. The traditional red choodas were accompanied by gold and diamond kadas and bangles. A small red bindi and a dazzling smile completed the look for this bride. 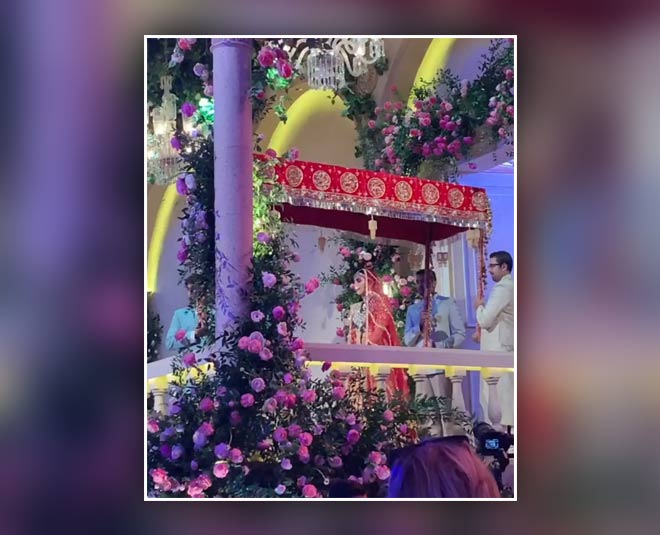 In many ways Shloka Mehta, stayed away from experiments and stuck to being a traditional bride. A beautiful one at that. Right from the choice of gold and red, to her hair pulled back in a bun with a gajra. And straight out of a saas- bahu serial came a moment captured on camera – Nita Ambani cracking her fingers on her forehead to ward off the evil eye. Another convention that we didn’t mind at all, was the love in the air. As Akash and Shloka peered deep into each other’s eyes, we were reminded of just why the world loved fairy-tale weddings.