Ranbir & Alia Wedding - Ladkiwale And Ladkewale Arriving At The Venue

Gharati and Barati have arrived at 'Vastu', the wedding venue of Ranbir and Alia. Let's take a look at their stylish couture!

We cannot hold our excitement together as ladkiwale and ladkewale have started to arrive at the wedding venue of Ranbir Kapoor and Alia Bhatt. The celebrities are donning sparkling couture and giving us major fashion goals.

Let’s see who has arrived wearing what. Taimur and Jehangir, sons of Kareena Kapoor Khan and Saif Ali Khan, have also arrived at the Mamu (uncle) Ranbir Kapoor's wedding venue. The kids were clicked with their nanny. Jeh was looking adorable in a pink kurta pyjama set, and Taimur was wearing a white kurta pyjama set.

Among Kapoor Sisters, Karishma Kapoor has also arrived at the wedding of Ranbir and Alia. She was wearing white saree with floral embroidery and completed her appearance with beautiful jhumka earrings. As always, the actress looked stunning. 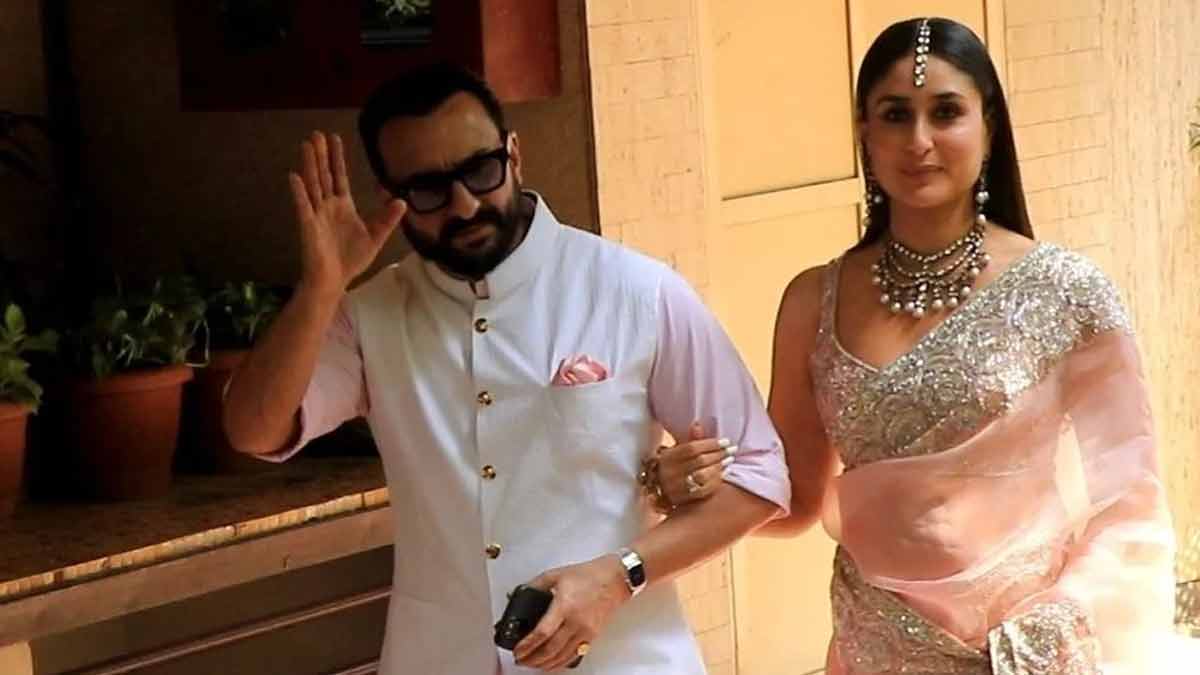 Kareena Kapoor Khan and Saif Ali Khan were clicked at their residence leaving for the celebration of Ranbir and Alia’s wedding. The diva can be seen wearing a gorgeous pink organza zari saree with a heavy golden border, designed by Manish Malhotra.

She is seen carrying a blush pink potli and donned Kundan neckpiece, maang tikka and earrings with stunning pearl beads. Her makeup belonged to the pink palette, and she stunned us with her looks.

On the other hand, Saif Ali Khan can be seen donning a pink and white pyjama-kurta set. He is wearing a white bandhgala jacket and twinning with his lady love.

Shweta Bachchan and daughter Navya Naveli Nanda have arrived in style at the wedding of Ranbir Kapoor and Alia Bhatt. Shweta was wearing stunning green couture with heavy jewellery in the same colour. On the other hand, Navya was wearing a blue-yellow ensemble and was looking pretty.

Directors Karan Johar and Ayan Mukerji have arrived at ‘Vastu’, the wedding venue of Alia Bhatt and Ranbir Kapoor. On one hand, Ayan Mukerji is wearing a golden bandhgala ensemble, while Karan Johar was seen donning pink mirror-worked bandhgala couture with a dupatta.

Taking to her Instagram account, the soon-to-be sasu maa, Soni Razdan, shared a selfie wearing a Manish Malhotra ensemble. Her status read, “Wedding Vibes!” On the other hand, Mahesh Bhatt was captured in a golden kurta-pyjama set.

Alia Bhatt’s best friend Akansha Ranjan Kapoor has arrived at the wedding venue. She was seen wearing a green organza saree and was donning green and golden earrings. She was carrying a white potli with her. Riddhima Kapoor, sister of Ranbir Kapoor, was seen wearing a golden lehenga by Abu Jani and Sandeep Ghosla. She took the dupatta on her shoulders and completed the look with a heavy green long Polki necklace and a beautiful choker. In the images circling social media, Riddhima’s daughter, Samara Sahni, is wearing a beautiful pink dress.

Neetu Kapoor arrived at the wedding venue of Ranbir and Alia with daughter Riddhima Kapoor Sahni and granddaughter Samara Sahni. She was also wearing a gorgeous pink lehenga with a multi-coloured dupatta designed by none other than Abu Jani and Sandeep Ghosla.

She was donning a stunning heavy neckpiece and earrings. She kept her makeup and hairstyle simple and elegant.

In a view circling on the internet, Pooja Bhatt was seen wearing a golden ensemble. She left her hair open and was seen donning natural makeup look. Pooja was also carrying a golden clutch.

Babita Kapoor and Randhir Kapoor arrived in style at the wedding venue of Ranbir Kapoor and Alia Bhatt. Babita was wearing a pink salwar suit, while Randhir was donning a golden bandhgala.