From London To Kolkata In A Bus: Know About The World’s Longest Route In 1950s

A bus which would let you travel from London to India, that too in the 1950s. Sounds way ahead of its time, right? Well, read on to find more interest...

A lavish bus which would take you from London to Kolkata by road; sounds fascinating, right? Well, this was a reality back in the 1950s where you could do cross-continent travel in a bus. The bus fare for one side travel at that time cost a whopping 145 pounds. The amount is approximately Rs. 13,630 which was a big one at that time. The bus was fully functional and transported people from one place to another, till the 1970s. The starting point of the bus was London and the last station was India. It also crossed several other countries in between including Belgium, West Germany, Austria, Yugoslavia, Bulgaria, Turkey, Iran, Afghanistan, and West Pakistan. According to the bus ticket, which is currently doing rounds on social media, the bus had an elaborate itinerary for the passengers.

Itinerary Of The London To Kolkata Bus Full of luxuries and facilities, the itinerary was a detailed one. It was full of luxuries which made sure that the passengers were entertained throughout. The bus had a reading and dining salon in the lower deck, while the upper deck had an observation lounge for sight-seeing.

Another attraction of the bus journey was its food. The bus had a fully equipped galley which ensured a regular supply of good food. Each person had separate sleeping bunks which ensured a sound sleep during the journey while allowing ample privacy.

The entertainment aspect was also taken into account and both radio and taped music were available for the passengers. There was music either for parties or during leisure time. During winters, the provision of heaters was provided as well. The bus was fitted with fan heaters which kept the passengers warm and cozy.

The windows were draped with curtains and proper carpeting was done in the walkways. The insides of the bus were designed in synchronization with homes of that time. The motive behind all these detailings was to make sure that the passengers felt at home even while travelling in a bus.

Don't Miss: Planning To Go to Kolkata? Checkout Out The Amitabh Bachchan Temple As Well 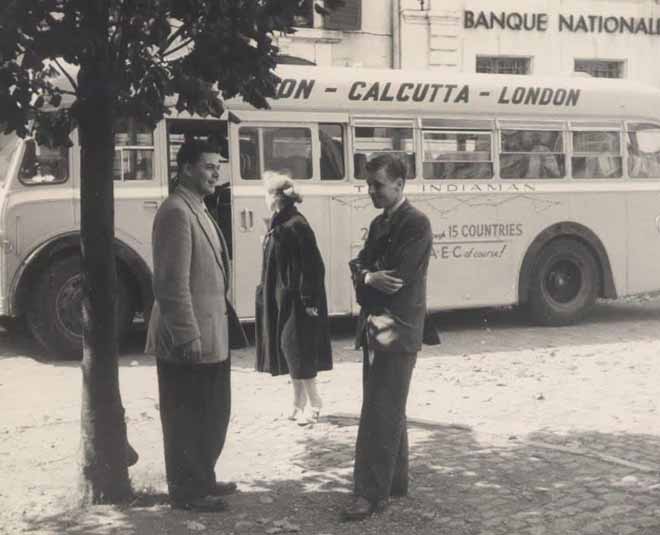 According to the timetable given in the ticket, which dates 1972-1973, the bus journey from London to Kolkata took approximately 46-48 days. The bus ticket mentions departure from London on July 25, 1972, and arrival in Kolkata on Sept 11, 1972.

The bus crossed Istanbul on Aug 6, Tehran on Aug 18 and Kabul on Aug 27. It finally touched Indian territory on Sept 5 by reaching New Delhi as its first stop. The final stop, however, was Kolkata where the bus reached on Sept 11.

Don't Miss: These Kolkata Souvenirs Are Perfect For Travellers

The bus journey also offered the opportunity of sight-seeing as mentioned on the ticket. Places like Banaras on the Ganges, Taj Mahal, Peacock Throne, and Raj Path were some of the prominent places that were included in the itinerary.

Cost Analysis Of The Journey

The total cost of the one-sided journey was 145 pounds. In today’s time, the amount would be approximately Rs. 13,630, which is a big enough sum for a bus ticket.

Travel, food, and accommodation, all the three facilities were included in the one-time payment of the ticket. According to the cost analysis of the ticket, the following was the cost of every amenity available on the bus - Travel cost 125 pounds, the food bill was just 10 pounds, and sundries amounted to 10 pounds, which provided services like ferries, hotels and campsites.

This lavish bus journey was one of its kind, considering the time period of its operation. It is estimated that the bus was functional till the 1970s, as no concrete records of its function post that period are found.

For more on travel journeys and tips, stay tuned to HerZindagi.