Fans have slammed the makers and Salman Khan for being biased as they have put Rubina in a corner. Here are the details. 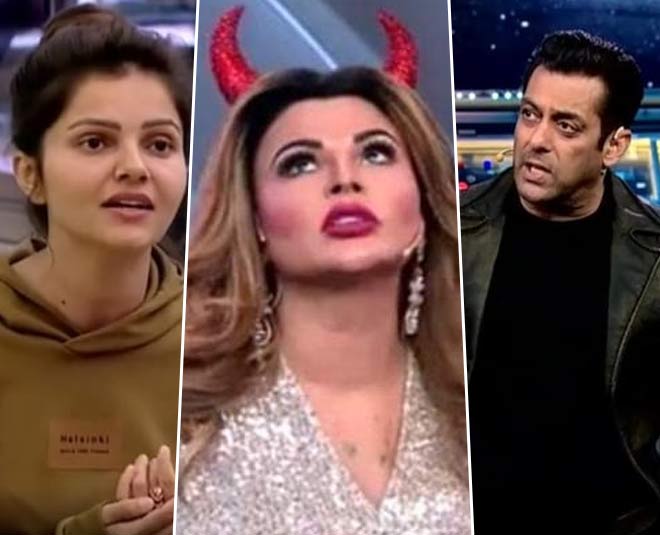 Bigg Boss house has always been the house of madness with ugly sides and games shining through, entertaining masses. The makers of the reality TV show game are well known for the absurd tasks and plotting is very common. Friends turn foes and foes become best buddies in this house. This time even a hard enemy like Rahul Vaidya has come out in support of Rubina Dilaik besides the fans and friends going against the decision of the makers and how!

There has always been not just an undercurrent but an outright biased decision making when it comes to the Bigg Boss 14 contestant Rubina Dilaik. Ever since the actress called out Salman Khan for being unfair in the beginning of the game, the superstar and the host of the show has been seen picking on her for every move she makes and every decision she takes and fans have each time said that Salman is biased!

This time even the other strong contestant, Rahul Vaidya, who is always loggerheads with Rubina, has come out in her support, slamming the decision of the makers to put her in a corner. Here is what happened and what the latest trailer says.

Recently, Rakhi Sawant pulled Abhinav Shukla's short's drawstring but was forgiven and not called out by the makers. Which many thought, was crossing the limits. However, this time the fans, most of the Bogg Boss house contestants including her enemy Rahul, and friends in the film and TV world have come out in support of Rubina.

Rakhi is well known to have been poking at him all the time and in the upcoming episode she is scene calling him "tharki".

In the video, Rakhi keeps taunting Abhinav while talking to Devoleena Bhattacharjee. She even asks the actor if Rubina has asked him not to talk to her (Rakhi). The man kept is calm and kept ignoring Rakhi until Rakhi did what does best and called him a 'tharki'. This was obviously not going to go down well with neither Abhinav not his wife Rubina.

He can be seen yelling at Rakhi by saying 'Yeh hi teri gandagi hai Rakhi'. When Rubina overhears the conversation and loses it. She throws a bucket full of water on Rakhi and then throws the bucket on the floor in a rage, calling the latter a 'badtameez aurat'.

However, the reaction of the Bigg Boss makers and Salman has enraged all as Rubina has been nominated for the entire show running time until the finale approaches,

Fans have come in support and here is what they have tweeted:

Even producer Pritish Nandy is unhappy with 'Bigg Boss 14' host Salman Khan and has called him a 'misogynist' in his tweet for slamming contestants Nikki Tamboli and Rubina Dilaik during "Weekend Ka Vaar".

Many feel that the makers of the show are following what Salman wants as he is well known to go after the person who speaks up against him or simply questions him. But Salman's fans believe that Salman is right so this a major topic for debate which can go on for hours.

The question here is that what are the makers thinking? Could this be a deliberate strategy do that the show gets more views due to the controversy? Or is it simply about following orders or well, something they think is justified?

Which side are you on? Who do you think will last in the house and win the trophy? Will Eijaz be back? Stay tuned to HerZindagi for the latest updates on Bigg Boss 14.