Watching a bride walk down the aisle with a photo of her deceased mother, we all are teared up for sure! 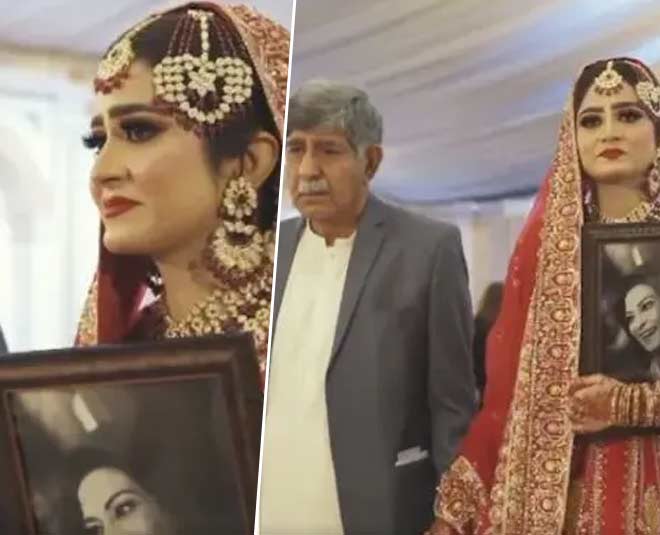 Weddings have always had a touch of personal, intimate moments for the bride and the families of the loved ones. We see another one taking over the internet and giving us those teary eyes!

The Pakistani Bride With A Picture Of Her Mother

A touching video of a bride entering her wedding venue with a portrait of her late mother in hand has left thousands of viewers emotional. Footage from a wedding in Pakistan showed the bride getting teary-eyed as she entered the venue holding a photograph of her mother. Dressed in a red bridal outfit, she was seen entering the venue with her father, who also looked visibly emotional.

Footage of the emotional moment was shared on Instagram by photographer Maha Wajahat Khan, who dedicated it to all daughters who have lost their mothers. In the video, relatives of the bride were also seen wiping away their tears and comforting her. The 57-second clip ended with a shot of the bride and her father hugging during her bidai or formal farewell.

Read More- Love Has No Age, So Does A Marriage! A Couple Marries Reunites After 35 Years To Marry One Another

A Priceless Reaction By The Daughter Of The Bride

A clipping of a bride and her daughter at her wedding went viral through an Indian MUA, Guneet Virdi’s Instagram handles which have over 390k views. The video has sent the internet into a meltdown.

We spot the daughter, Deeva, entering the vanity room, where her mother is all ready to hit the venue with the makeup artist and throw in a compliment just as she has a glance. The little one is mesmerized to see her mother look absolutely stunning with all the bridal wear and setup. She has us in awe.

She is heard saying, “Aap toh bohot sundar lag rahe ho” and we can’t control our set of emotions for her.

As soon as the video hit the internet, people seemed to have fallen in love with the little girl. There are 390k views to the viral video. The comment section is flooded with comments for the mother-daughter duo.

The Groom Touching His Bride’s Feet

For years now, women have often touched the feet of their husbands' in respect in Hindu marriages. It is only now that many have started to question why this respectful and loving gesture is only one-sided.

Well, times are changing. Every now and then we see grooms breaking stereotypes and promising their wives an equal partnership. Recently, after the saat pheras, when the bride tried to touch the groom's feet, he refused but he quickly touched the bride's wedding to mark respect.

In this Instagram video which is going viral on the net, one can see the bride first bowing down to touch the groom's feet and then the groom touching her feet. The gesture was totally unexpected for the bride and she can be seen jumping back.

What are your views on the same? Connect with us over Instagram and let us know. Stay tuned to HerZindagi for more viral stories!