Which Female Candidate Will Win The Assembly Elections This Time?

These women candidates are contesting elections in Maharashtra and Haryana, who do you think will win?

At the moment voting is underway for assembly seats in Maharashtra and Haryana. This time the assembly elections are really important as after the BJP's absolute majority at the Center, the results will bring Congress and BJP face to face. Some of the prominent candidates in the Haryana Assembly elections include Chief Minister Manohar Lal Khattar, former Chief Minister Bhupinder Singh Hooda, JJP's Dushyant Chautala and INLD Abhay Singh Chautala, while women candidates include Babita Phogat (Gold Medalist wrestler), Tik-Tok Star Sonali Phogat and Nauksham Chaudhary of Miranda House in Delhi.

This time we can see the dominance of big families in Maharashtra. Gopinath Munde, who was a prominent leader of Maharashtra, died in an accident a week after Narendra Modi became Prime Minister, his daughter Pankaja Munde is contesting at the assembly elections. She has also been a minister in Devendra Fadnavis' government in the year 2014.

Eknath Khadse, who was once a rival to Chief Minister Devendra Fadnavis, is not contesting the Maharashtra Assembly elections this year, but his daughter Rohini Khadse is contesting from Muktai Nagar seat.

BJP has also given tickets to candidates whose families belong to another party. The political party has fielded Namita Mundada from the Kej assembly seat, who is the daughter-in-law of NCP's Vimal Mundada. This seat is reserved for scheduled caste members.

Next up, we have: 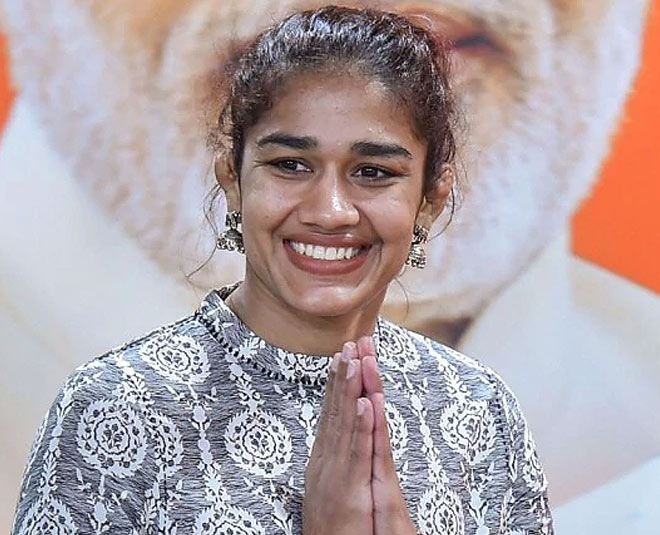 She bagged the Gold medal at the Commonwealth Games and also has  Aamir Khan's film Dangal on her which was a block buster. She joined BJP in August. Babita will be contesting from Dadri, which falls under the Bhiwani Mahendragarh Lok Sabha seat.

Sonali Phogat is famous for her Tiktok videos and works for BJP. She has also appeared in some TV shows.

Nausham is contesting on a BJP ticket. Nausham's mother has been an IAS and father is a judge. The 26-year-old is contesting from Punhana seat. According to sources, Nauksham knows 10 languages. After rejecting the annual salary of Rs 1 crore, she is challenging the rivals in Punhana, which is amongst the most backward assemblies in the state. Pankaja Munde has been very influential as a female politician. Besides being a minister in the Fadnavis government, she is also known as a businesswoman in the sugar factory and banking sector. In 2017, she was awarded 'The Powerful Politician'. Pankaja is the niece of late leader Pramod Mahajan and cousin of Rahul Mahajan.

Dr. Bharti Lavekar first contested the Maharashtra Lok Sabha seat on behalf of the BJP in 2014. As an MLA, Dr. Bharti Lavekar has worked from 2014 to 2019 and she is campaigning vigorously to win the elections this time.