She is a favourite of all actresses, the life of all mehendi ceremonies in Bollywood and considered lucky by Karan Johar. To meet this artiste, open t... 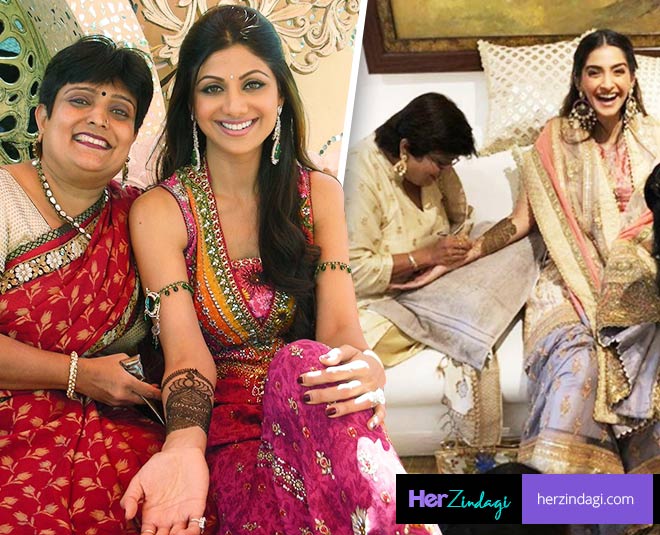 She is a favourite of all actresses, the life of all mehendi ceremonies in Bollywood and considered lucky by Karan Johar. Veena Nagda started her career as a mehendi designer almost 30 years ago and she is also the world's fastest mehendi artiste. She has left her impression on celebrities like Kajol, Sridevi, Karishma Kapoor, Shilpa Shetty, Sonam Kapoor, Liz Hurley, Alia Bhatt and the list goes on.

She has beautified the hand of almost all actresses and many at their own wedding ceremonies like Sonam, Karishma Kapoor and Shilpa Shetty. Born into a middle-class family in Mumbai, Veena specializes in Bridal, Nail Polish, Shaded, Hira-Moti, Zardosi, Arabic, Black Mehendi, Sequence, stone and Swarovski mehendi.

This picture was taken when she had come for Sonam Kapoor's wedding. This photograph is proof that she is a favourite in the B-town. Did you know that her work has also been featured in several Bollywood blockbusters like 'Kabhi Khushi Kabhi Ghan', 'Kal Ho Na Ho', 'Mere Yaar Ki Shaadi Ho', 'Patiala House', 'Ye Jawaani Hai Dewaani' and in albums including Falguni Pathak's popular music video 'Maine Payal Hai Chanakayi'.

This Veena doing her work at Isha Ambani's engagement ceremony!

Yes! She did the mehendi for all the beautiful actresses that you see in 'Veere Di Wedding', including Swara Bhaskar. Before we forget ourselves in this amazing portfolio, a quick fun fact: Veena was the artiste behind the extensive mehendi of the bride at the grand marriage of the Diamond King Vijaybhai Shah's son and daughter's mehendi ceremony that took place in Belgium in 2002.

Do you remember the song 'Channa Mere Ya' featuring Ranbir Kapoor? Remember the mehendi he had put on his hand? Yes, you guessed it tight, Veena is the one who adorned the handsome actor's hand with henna. Do believe? Check this out:

Her Bollywood client list is long an jaw-dropping! From Dimple Kapadia, Madhuri Dixit, Rekha, Shweta Bachchan, Farah Khan to Praful Patel's daughter, Neha Dhupia, Nita Ambani to Preity Zinta, you name it an they know her work. Veena is a force to reckon with.