It's Anushka Sharma's birthday and we thought of bringing you some of her best ethnic looks. 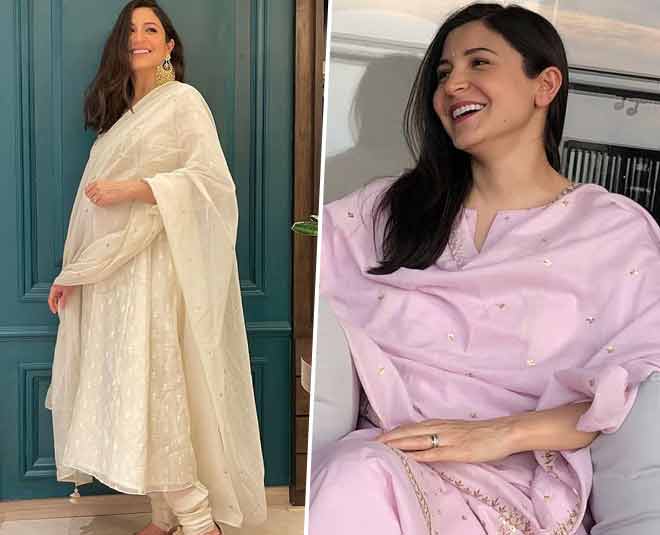 Anushka Sharma is always dressed in her best, be it on-duty or off-duty. Most days, her sartorial choices oscillate between roomy floral maxis and chic kurta sets. On occasions, the diva doesn't shy away from experimenting.

Be it beautiful Indian wear or chic western wear, she has always carried it perfectly. If you have been hunting for some ethnic wear then take notes from Anushka Sharma's closet. She has some really trendy pieces in her ethnic wardrobe. Here are 5 of our most favourite suit sets she donned in the past. Have a look. 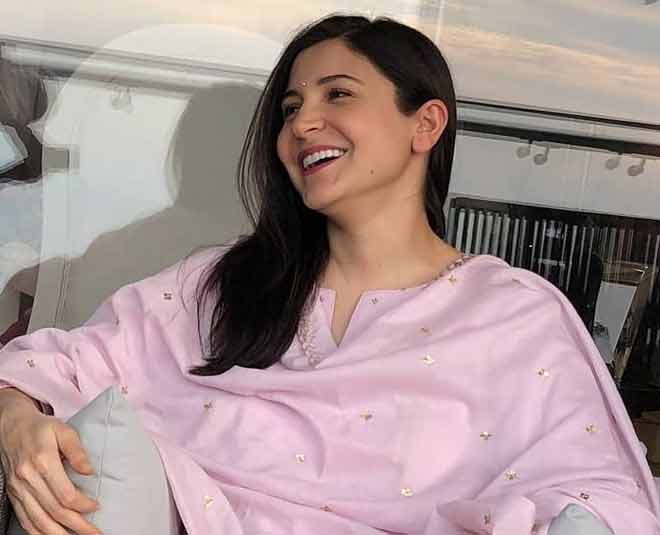 During her pregnancy, Anushka Sharma shared a picture on her social media while enjoying her chai time at home with her father. She wrote, “When your dad captures your perfect chai time candid photo and tells you to cut him out of frame but you won’t because – daughter.”

In the picture, Anushka Sharma can be seen smiling her heart out, wearing a pretty lavender coloured salwar suit. Such a beautiful colour! Her suit had intricate sequins work all over and a matching dupatta. If you have a thing for light, pastel colours, a suit like this one can be a good pick. 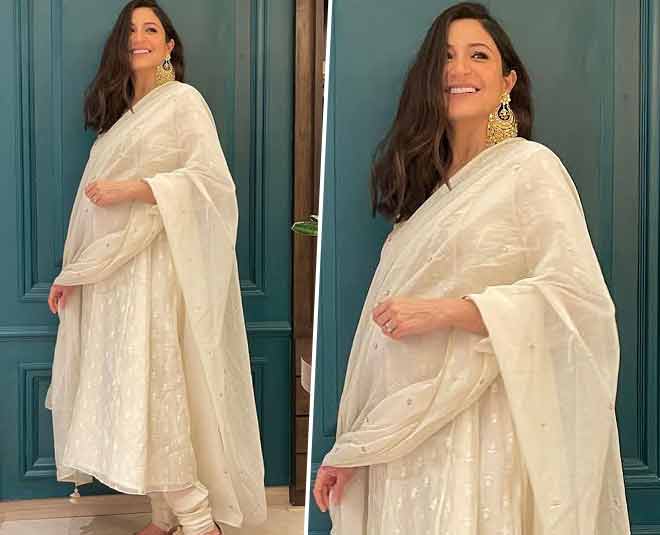 For the at-home Diwali celebrations, the actress opted for a white chikankari set from the house of Anita Dongre. Her anarkali had intricate gold embroidery all over with glittering motifs, a churidar, and a white tasseled dupatta.

Anushka Sharma accessorised her look with a pair of oversized chaandbalis by Anita Dongre. She rounded off her look with a pair of ivory juttis. Beauty wise, she opted for kohled eyes and fresh makeup. Chikankari and Anarkali, what a beautiful combination! If you are looking for outfits to attend a wedding, this can be a good pick.

Don't Miss: Sabyasachi Mukherjee Or Manish Malhotra, Which Designer Should You Pick For Your Dream Wedding Lehenga? 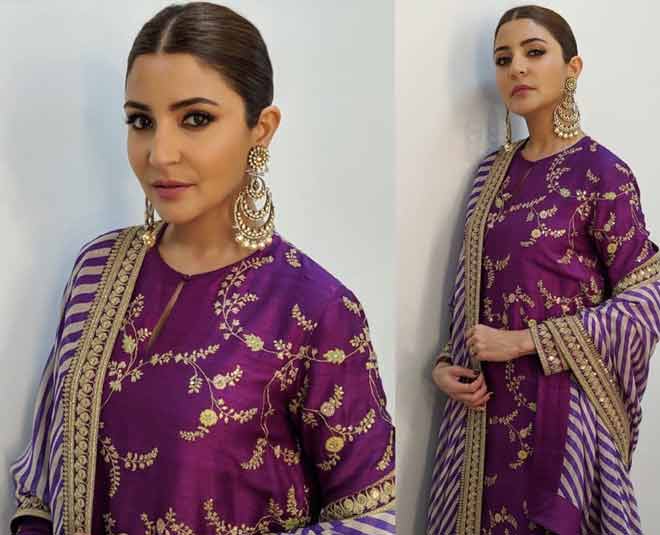 For a promotional event, Anushka Sharma opted for this suit set from Sabyasachi Mukherjee's summer bridal couture collection. It had floral gold hand embroidery work all over. It was teamed with a leheriya dupatta which had an antique tilla border from Kashmir.

Anushka Sharma's look was completed with gold and pearl earrings by Tribe Amrapali. Her makeup was kept on the nude side, kohled eyes and a matte face. Her hair were parted in the middle and tied in a sleek bun. A heavily embroidered suit like this one can be a good pick for a wedding event.

Don't Miss: 5 Suits, Kurtas From Sonam Kapoor's Wardrobe For Times You Like To Go A Lil Extra 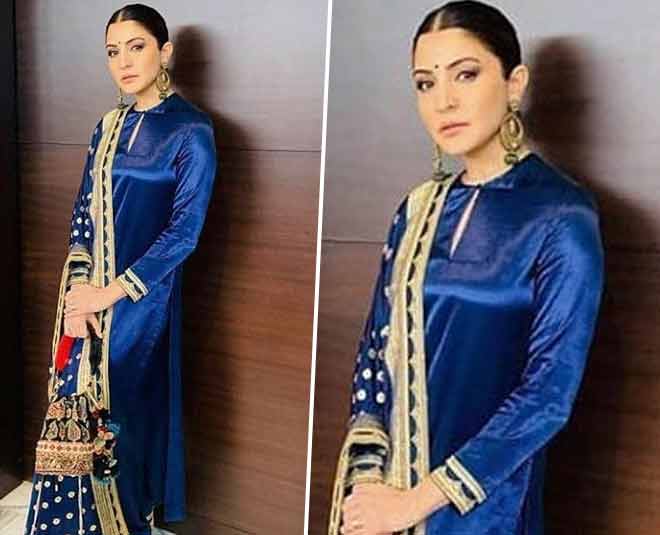 Anushka Sharma accompanied Virat Kohli to an event wearing this royal blue Sabyasachi ensemble. This one had a long velvet Kurti which had a keyhole neck. It was teamed with a pair of palazzos and a matching dupatta with a golden border.

Beauty-wise, her hair were done in a sleek bun. Her eyes were kept smokey and her lips were kept nude. Her look was completed with a small bindi. Her choice of accessory with the look was a pair of big chaandbalis. 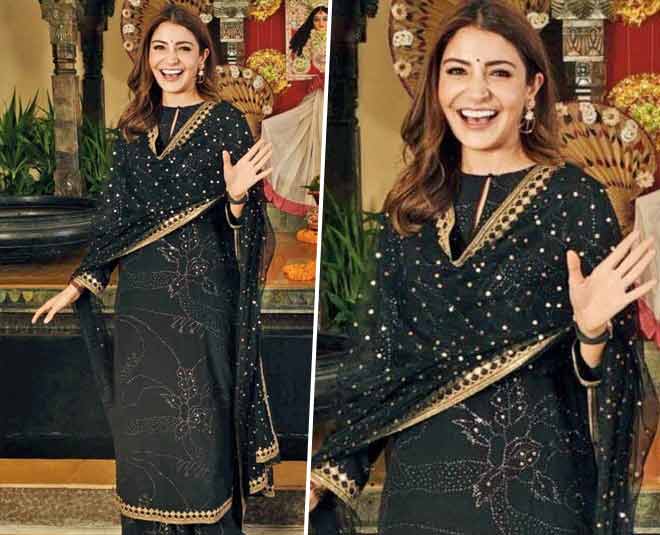 Anushka Sharma carried this black salwar kameez suit with golden embellishments for an event. Her suit was beautifully embroidery and also had golden embellishments. Her look was completed with a pair of golden jhumkas. Her makeup was kept very simple and natural. A small black bindi rounded off her look. Her hair were parted in the middle and kept on the sides. If you have a thing for blacks then this black and gold combo won't disappoint.

Don't you think your ethnic closet needs an upgrade after having a look at all these beautiful numbers? Which one is your favourite? Share your thoughts with us. For more stories on celebrity fashion, stay tuned!