Catch a glimpse of the bhabhi-devar fun equation between Shloka Mehta and Arjun Kothari. 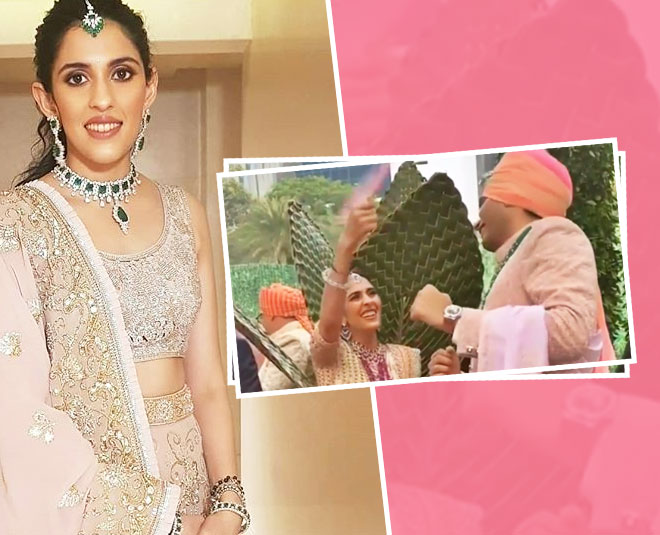 It's not for nothing that the Ambani ladies are always in the news. Be it their lavish parties or exquisite fashion outings, whatever they do, they always manage to hog the limelight. And recently, Mrs. Shloka Mehta Ambani is making headlines for her sweet gestures at her devar, Arjun Kothari's wedding.

Recently, a couple of fun videos from Arjun Kothari’s wedding have surfaced on social media and we can’t help but drool over the same! In one of the videos, Shloka Mehta was seen shelling out bhabhi-devar goals as she was seen dancing with her devar Arjun and even fanning him to prevent him from sweating and spoiling his wedding day look. Watch the video below:

In another video, Shloka could be seen blowing a kiss to the bride, while looking at her lovingly. Mukesh Ambani’s niece Isheta Salgaocar and Radhika Merchant were also seen standing next to her.

A post shared by Shloka Ambani Encyclopedia (@shlokaakashambani_fp) onNov 21, 2019 at 12:21am PST

At the wedding, Shloka was seen donning a gold embellished lehenga which she paired with matching dupatta and blouse. She broke the monotony of her look by wearing a red stone diamond necklace. Adding a little more glamour to her look, Shloka opted for chunky kadas and a pretty maang tikka. For makeup, she opted for a dewy sheen, glossy lips, and highlighted cheeks.

Prior to this, Ambani ladies were making hogging limelight with their unconventional, regal and stunning fashion choices at Nina Kothari's daughter Nayantara's pre-wedding bash. Shloka opted for glamourous ivory and white parallel pants that she teamed with an embroidered choli. She finished her look with a beautifully embroidered layer that's unconventional and spiffy. Diamond jewellery, middle partitioned wavy tresses, and dewy makeup rounded off her look. Isha Ambani, on the other hand, opted for an understated jumpsuit with intricate prints in the shades of nude. She teamed up her attire with a belted dupatta, a layered necklace, soft smokey eyes, and tinted lips. Check out their looks:

And how can we forget about Anant Ambani's rumoured girlfriend Radhika Merchant while talking about Ambani clan? She too looked splendid in a red dress by Anamika Khanna. She wore a pair of formal pants that she teamed with a finely embroidered choli, a belted dupatta and a layer with contrasting beige floral motifs. While we love her unconventional attire, she finished her look with a sleek ponytail, layered necklace, and diamond earrings.

What do you think about Shloka's gestures? Isn't she the cutest? Do tell us in the comments and stay tuned to HerZindagi for more such articles.