See Pics: Grand Interior Of The Laxmi Vilas Palace, The Biggest Indian Residence, Is A Visual Treat You Can't Miss!

Check out the grand interiors of the majestic Laxmi Vilas Palace in Baroda, Gujarat which is spread across 500 acres and boasts of 170 rooms, a grand ... 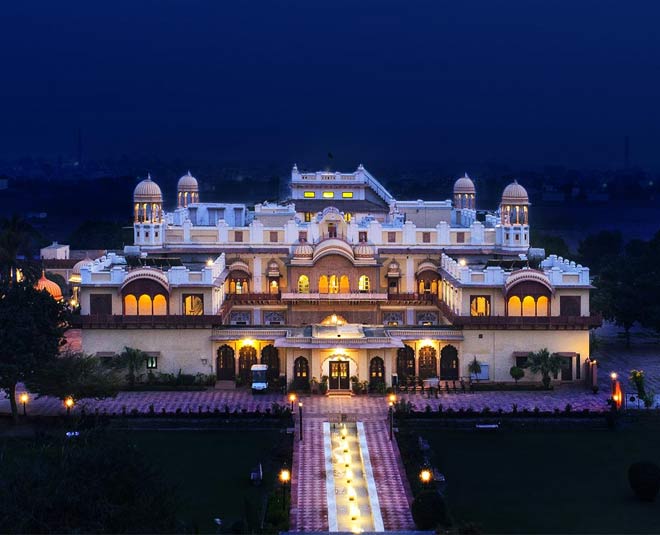 This palace which is four times bigger than London's Buckingham Palace is a majestic and the largest private residence in India. Laxmi Vilas Palace, Vadodara, Gujarat is currently being run by HRH Samarjitsinh Gaekwad who is the throned Maharaja of Baroda since 2012. He is married to Maharani Radhika Raje Gaekwad who was recently named the most beautiful woman of the Indian kingdom dynasty. Spread across 500 acres, Laxmi Vilas Palace has over 17 rooms. Here are some inside pics of the palace that exudes royalty in every corner and is a visual treat that one would want to see in person as well.

Built in 1890 by Maharaja Sayajirao Gaekwad III, Laxmi Vilas palace has been made in the Indo-Saracenic Revival architecture-style. Interestingly, the architect of the palace, Major Charles Mant, committed suicide just before the construction was completed because he thought that the palace would collapse as per his calculations. However, it has been 125 years now and the palace still stands strong in all its glory. When the palace was constructed in 1890, it cost the royal family, Rs 27 lakhs. 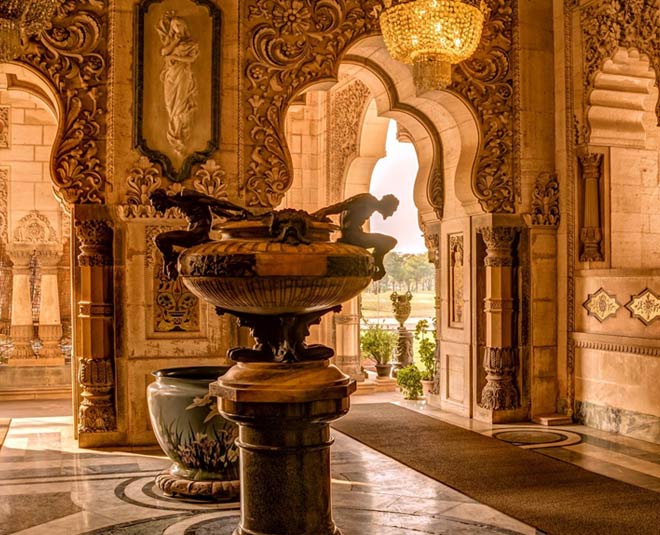 Although built such a long time back, the palace was equipped with elevators. It also has a 10 hole golf course, which was originally in the 1930s for his European guests. However, in the 1990s, it was opened to the public by the Maharaja.

The interiors of the palace have a very European touch to it. The Darbar Hall still holds musical performances and has a beautiful Venetian mosaic floor. It is said that the grand palace has more stained glasses than any other palace in the world. Most of the glasses were imported from Belgium. 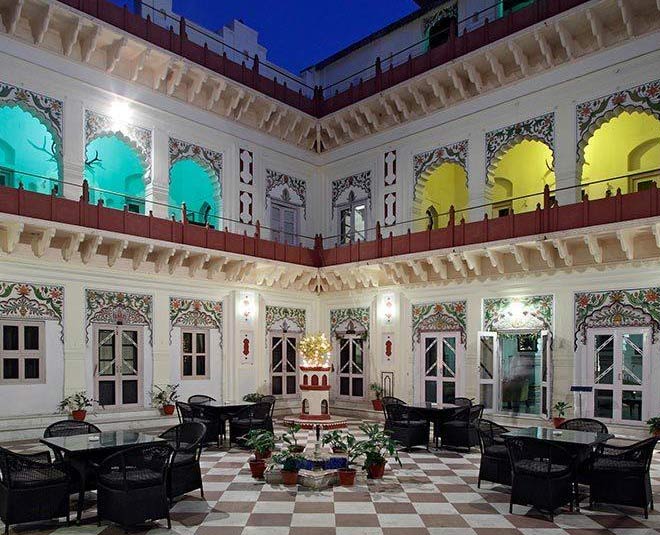 Outside the Hall is an Italianate courtyard of water fountains. The landscape of the grounds was created by William Goldright, a specialist from Kew Gardens. The palace also boasts a huge collection of old sculptures and armory in marble, bronze, and terracotta by Fellici. 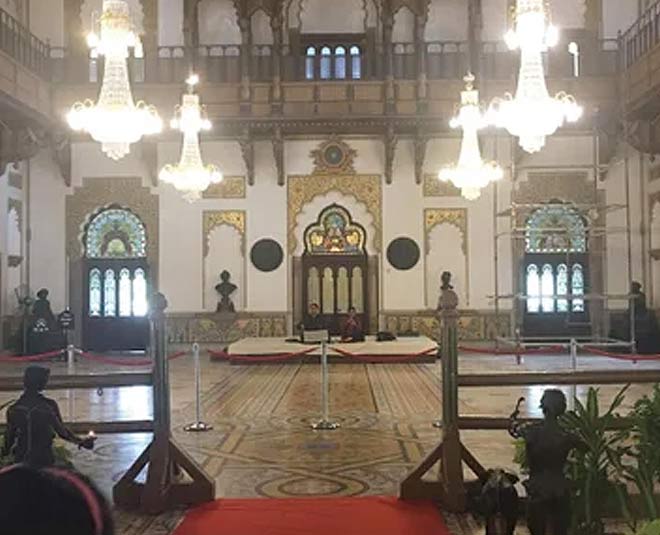 The palace also consists of LVP Banquets and Conventions, Moti Bagh Palace and the Maharaja Fateh Singh Museum Building. The museum building was initially built as a school for the Maharaja's children.

Don't Miss: Irrfan Khan And Sutapa Sikdar's Home In Madh Island Has A Touch Of Indian And Turkish Vibe

But now, the building has artworks that include a remarkable painting collection of Raja Ravi Verma on its walls. During the time when it was still a school, the Maharaja had made a miniature railway line, that would go around the mango orchard and take the children from that building to the palace. The engine of that train can now be seen at the entrance of the museum. 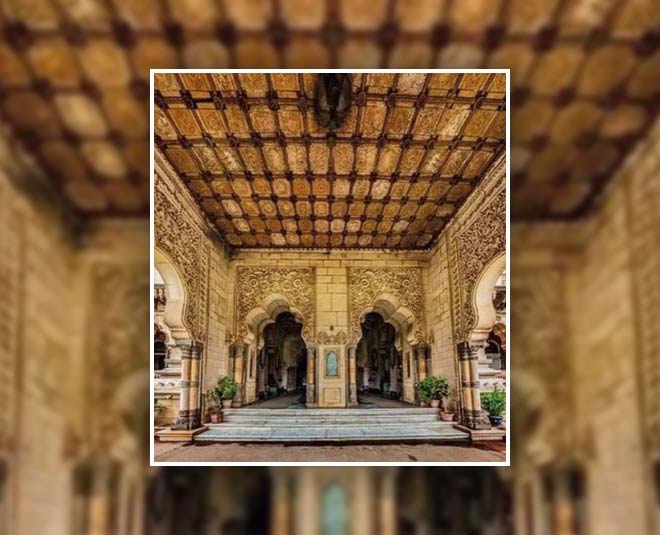 The palace also had a zoo earlier but now it only has a number of crocodiles. Many Bollywood films also have been shot here like Prem Rog, Dil Hi Toh Hai and Grand Masti.

Now Maharani Radhika Raje Gaekwad is also there on Instagram and she keeps giving her followers, a visual treat of the palace with some selfies, and get-togethers. She also shares some old moments from back in the day when there used to be huge royal banquets held at the palace. Scroll down to take a look at all those moments shared by the queen who wears beautiful handloom sarees and often promotes local weavers on her handle.

The below picture gives us a glimpse of the doorways and pillars of her grand abode.

The below pictures are from the Rajabhishek ceremony where the Maharaja was crowned in a huge ceremony.

The Maharani captioned the pictures: "On this date, 22nd June 2012, took place the Rajyabhishek or coronation of my husband, Maharaja Samarjitsinh Gaekwad. Amidst family and well-wishers, to the chants of the Vedic mantras and beating drums, and the blessings of the overlooking Raja Ravi Varma Gods, he was seated for what will be, the one and only time on the Gaadi or throne. Image 2: the Rajyabhishek of my grandfather in law, late HH Maharaja Pratapsinhrao Gaekwad. Seated alongside is his wife, late Maharani Shantadevi."

A sneak peek to the "Royal banquets hosted by the Royal Gaekwads for dignitaries and international guests."

Sharing the above pic, the rani wrote: "As there was no concept of catering and renting of props, furniture or crockery, and cutlery in the good old days, Royal households actually owned vast numbers of everything that a banquet required.

Take a look at the antiques inside the palace. The Maharani captioned the image: "Lukshmi Vilas Palace documentation. Integrating collections, integrating generations."

I don't know about you, but once India becomes COVID free, my trip to check out the museum and this beautiful palace is pending for sure!

For more visual treats to the interiors of Indian palaces and celeb homes, stay tuned to HerZindagi.