Catch the highlights and see how women shine at the Republic Day parade 2020. 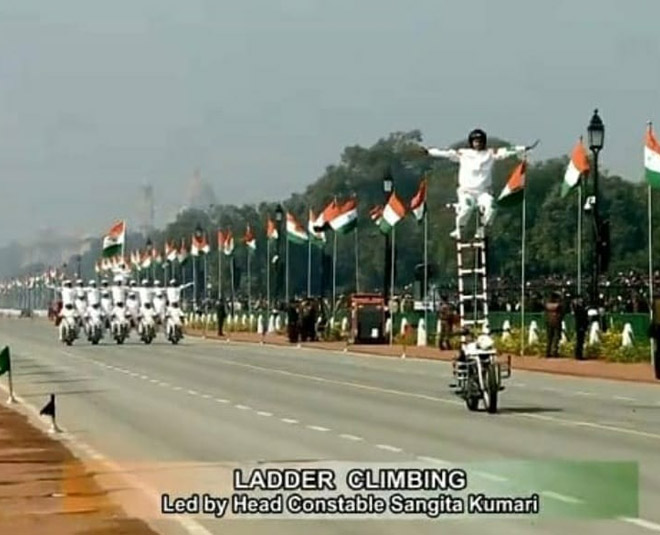 Just like every year we switched on the TV and watched the Republic Day parade, a customary ritual most households have had till date. In my home, my mother wakes me up every year early morning so that I watch the parade no matter what. This time as well I was excited to watch women shine at the parade, being the real highlights for me and many more women, a proud moment for sure! Besides Captain Tanya Shergill leading the contingent, we got see women CRPF Biker Team that performed some daredevil stunts on 350cc Royal Enfield Bullet motorcycles.

It was 65-member women bikers contingent that was commanded by Inspector Seema Nag. They displayed their acrobatic skills on their Bullets. There were many firsts this time and sure enough, the crowd cheered with full zeal!

The moment when Captain Tanya entered there was a thunderous applaud and personally, my family members too stood in front of the T.V. and gave her a standing ovation... just to capture the gravity of the moment. A very proud moment.

This was the first time that all-woman bikers contingent of the CRPF showcased stunts at the January 26 Republic Day parade which took place at Rajpath, just like every year. The team displayed its skills towards the end of the over 90-minute-long parade.

"It will be the first time that our women bikers are going to be a part of the Republic Day parade. This squad was raised in 2014 as part of our commitment to involving women in all spheres of duties rendered by us," CRPF spokesperson Deputy Inspector General (DIG) Moses Dhinakaran had earlier told a news agency.

Inspector Seema Nag was the commanding officer, who is posted with the Rapid Action Force (RAF).

Delhi: Asst Sub Inspector Sujata Goswami with five of her teammates speeds down the Rajpath displaying their daring formation, “All Round Defence”. (pic 1)
The 'Beam Roll' formation led by Head Constable Asha Kumari showcases a daredevil rolling on the beam. (pic 2) #RepublicDay pic.twitter.com/s0u7ooy62B

What is RAF you ask?

"It is the special anti-riots combat unit of the Central Reserve Police Force (CRPF). It is the world's largest paramilitary force with about 3.25 lakh personnel in its ranks. The members of the squad are chosen by CRPF trainers and they are in the age group of 25 to 30. They are drawn from various combat ranks of the force," said another official.

According to the official, this women's bikers team "had performed at the birth anniversary celebrations of country's first home minister Sardar Vallabhbhai Patel on October 31 last year at Kevadia in Gujarat. The event was attended by Prime Minister Narendra Modi. In 1986, the CRPF had raised the first armed women's battalion in the Asia region and at present, it has six such units with over 1,000 personnel in each."

This year at the Republic Day parade, the CRPF contingent presented nine acts of daring bike riding and concluded with a formation of a human pyramid on multiple motorcycles.

At the 2018 parade, a similar debut was made by the women bikers team of the Border Security Force (BSF).

In 2015, women marching contingents of Air Force, Navy and Army, had debuted in the national parade.