Checkout who wore what at Armaan Jain's wedding. 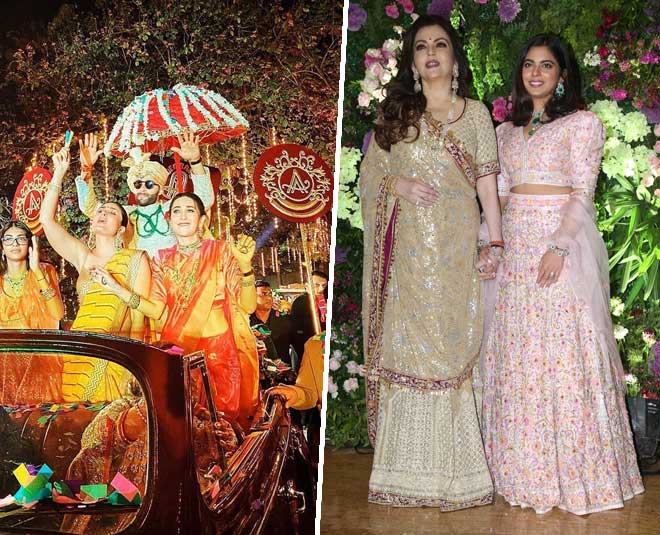 Kareena & Karisma become the perfect baaratis at the typical Punjabi, lavish wedding of their cousin Armaan Jain while a huge guest list including 0ther Ambanis and Thackeray play the perfect guests. Arman Jain is Rishi and Randhir Kapoor's sister's and Manoj Jain's son. He also did a film in 2014 called Lekar Hum Deewana Dil, co-starring Deeksha Seth. It was helmed by Arif Ali. The bride is Anissa Kapoor, Armaan's long time girlfriend.

1The Couple That Got Married! 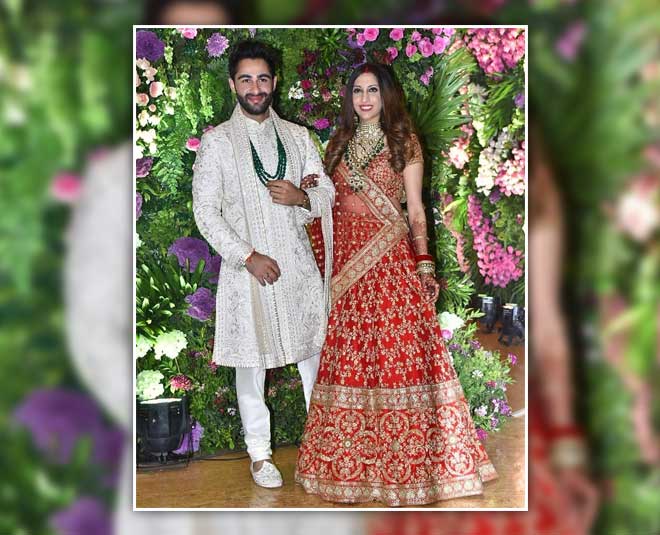 Here is the couple that got married and gave Kareena and Karisma the chance to be the fun baratis. Armaan Jain looked dapper in white with the emerald necklace while Anissa wore a red and silver lehenga teamed with emerald jewellery. Stunning as usual, Kareena looked nice although we expected a more glamourous, pretty saree knowing that diva has an amazing taste but well she does look nice in whatever she wears. The saree is by Nikasha. Kareena carried Aanchal Sayal's potli. This image combined together has many faces with Karisma in the middle with her daughter Sameira. What I am loving is Karisma's rani haar which is looking beautiful on the Raw Mango saree. The Kapoor brothers on either side look nice in formals and typical traditional wear. 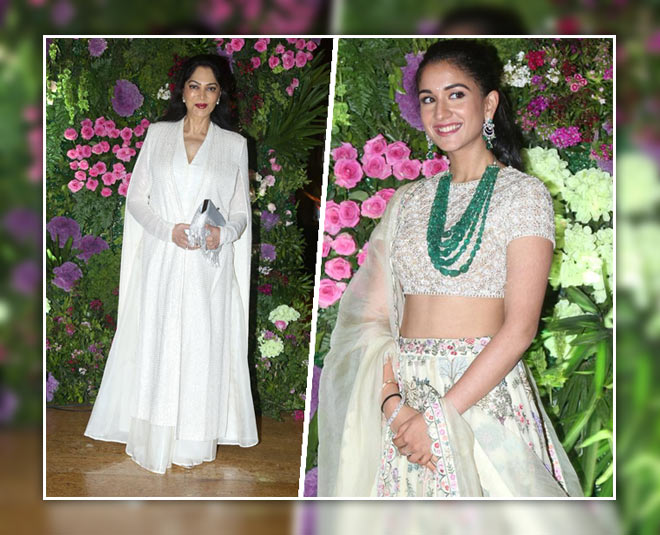 Clad in whites and silver the twp ladies looked beautiful! Radhika stood out with her emerald two layered necklace. This Ambani couple that will celebrate it's first wedding anniversary in on March 10, looked much in love and beautiful together. 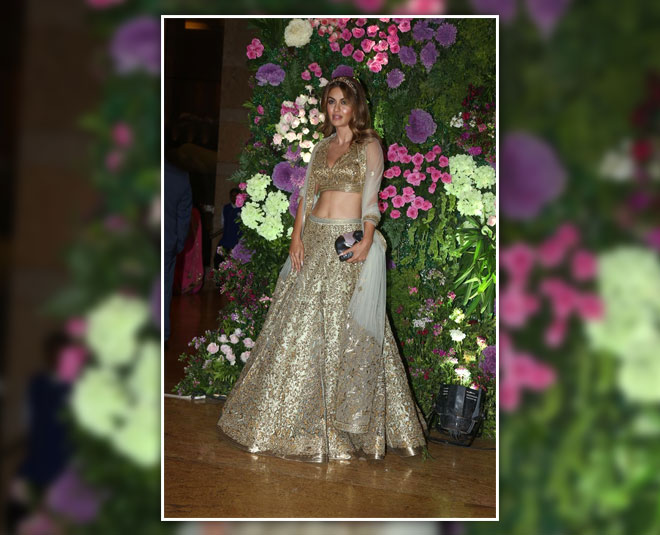 Her gilded lehenga totally stood out. The golden was just perfect with heavy embroidery work all over. 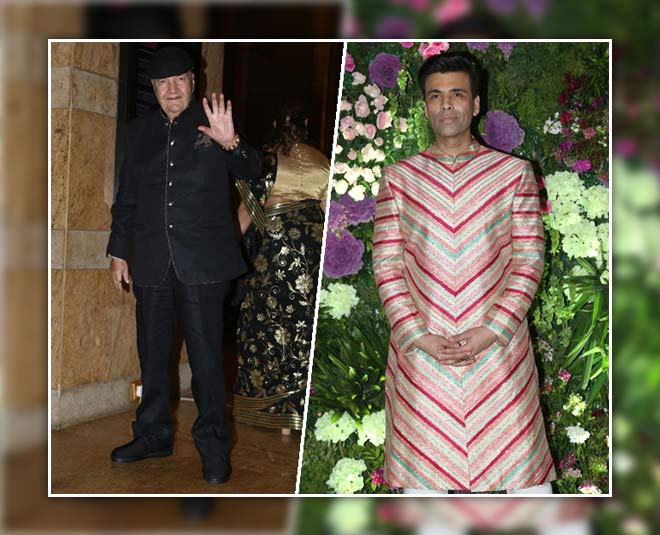 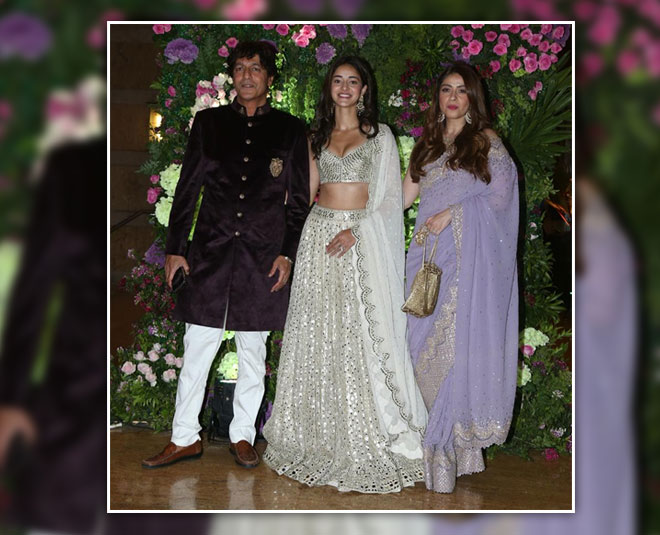 In this silver and white lehenga Ananya looked beautiful. 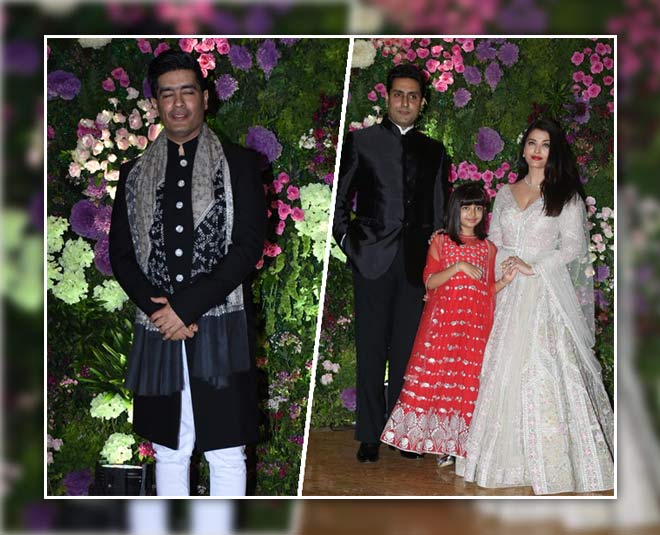 Here is what Manish Malhotra wore and the Bachchan shimmered the night with Aishwarya in silver and white, Aaradhya in red. Big B, as usual, looked humble in a shawl and white traditional outfit while Tina Ambani looked wedding-ready in purple and pink. 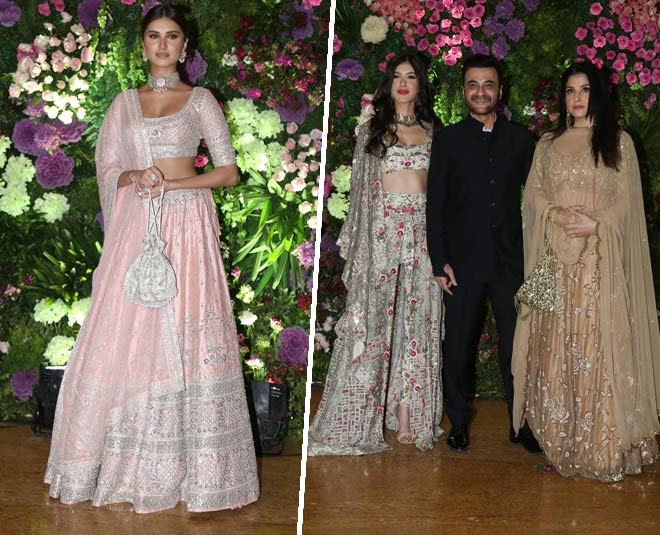 This mother-daughter duo looked stunning together as they posed for the shutterbugs. While Isha wore a baby pink lehenga with embroidery all over, Nita wore beige and golden. While them were dressed in black Sonali looked nice in a black outfit with a purple shawl or overall.