Hailing from Haryana, related to the stable of wrestling sisters of the hit Bollywood film 'Dangal' fame, Vinesh, 23, bagged a historic gold, a first time for an Indian woman in wrestling in Asian Games. She beat Yuki Irie of Japan with a score of 8-2 in the 50 kg category final in Jakarta.

Vinesh executed her skill with impressive moves and composure, prompting double Olympic medallist Sushil Kumar, who was there to witness the epic moment, term the win a "lopsided contest". This was India's second gold in the Asiad, with the earlier one coming in wrestling through Bajrang Punia.

She took her time to assess Irie before surprising her with a swift move to collect four points with a leg grab 90 seconds, but then later she gave no chances to her rival to fight back. 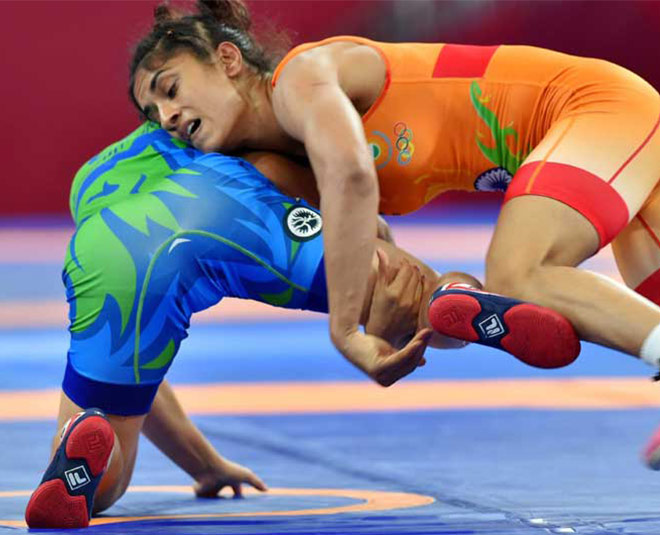 This is her second medal at the Asiad, as she has won a bronze in Incheon four years ago. Vinesh told media that Irie "is a good wrestler" but she knew her opponent's game pretty well. "I wanted to take an early lead and keep her at bay after that. I am happy that the strategy worked. I had three to four silver medals in Asian events before, and I wanted to win gold this time. Everything fell into place for me and it helped me triumph".

Vinesh is the daughter of wrestler Mahavir Singh Phogat's younger brother Rajpal and the cousin of wrestlers Geeta Phogat and Babita Kumari. Both her cousins have won gold in 55kg category in Commonwealth Games.

In allowing her cousins and herself to pursue competitive wrestling, her father and uncle had to deal with immense pressure and opposition from the community in their village in Haryana.