From a small village in Tripura to the Blender's Pride Fashion Tour, the village fashion influencer Neel Ranaut shares his journey with us.

For the last three-and-a-half years, morning expedition to the forest, around the village of Teliamura in Tripura, to forage for flowers and plum leaves has been a  routine for Sarbajit Sarkar alias Neel Ranaut or #villagefashioninfluencer,as he likes to call himself on Instagram.

After hours of search and a basket full of materials, he generally returned home to his grandmother’s old petticoats and blouses. Then he transformed them into avant-garde looks! These were mostly replications of designer dresses worn by popular Bollywood stars like Deepika Padukone, Priyanka Chopra, Kangana Ranaut and even Hollywood actors like Zendaya. Then he would pose for his phone camera before uploading his looks on his Instagram feed with thecaptions like 'Who wore it better?' 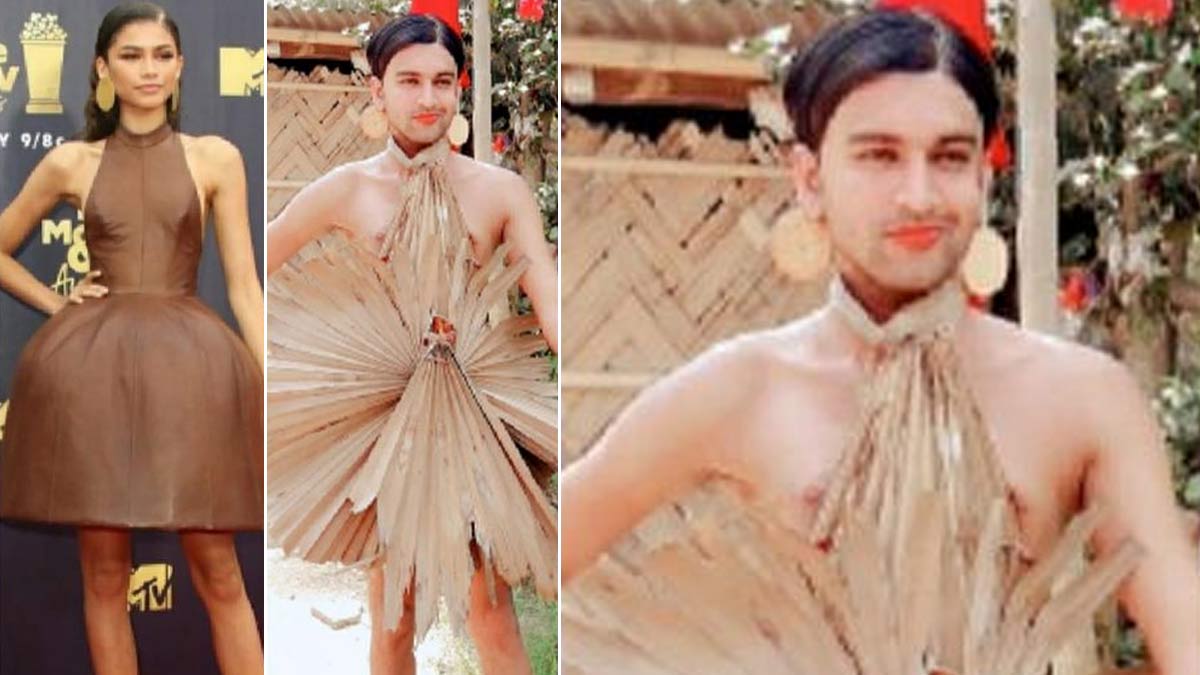 Back in June 2021, he came  home from his daily routine to see a big, brown parcel labelled ‘Abu Jani and Sandeep Khosla’ (famous designer duo from Mumbai) at his doorstep. It was a designer dress gifted to him by the duo for the occasion of Pride month.

“I always wanted to own a designer dress but could never afford one,” Neel said with an ear-to-ear smile plastered on his face. 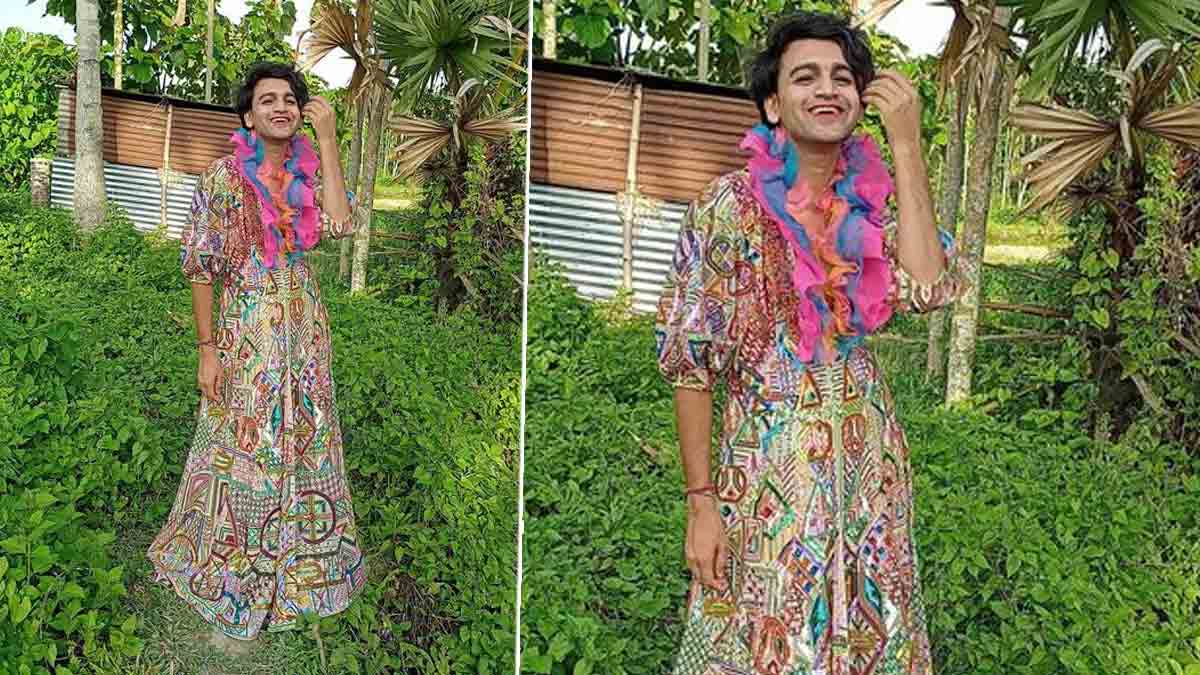 During Pride Month, which celebrates the  LGBTQIA+ (Lesbian, Gay, Bisexual, Transgender, Queer, Intersex, Asexual) community, Namrata Ganguly (ofJagran News Media) spoke to Neel Ranaut about his love for colourful dresses, and the love and hate opinions he receives while following his passion for fashion.
He wanted to incorporate his love for the colour blue 'Neel' and actor Kangana Ranaut in his name, hence the alias Neel Ranaut came up.
It’s not like he suddenly wished to be seen in dresses and skirtsEver since his childhood, Neel has felt more comfortable wrapped in the six yard-long sarees rather than  three-piece suits.
Neel said,“I used to hide this from my mother and grandmother as they were never fond of seeing their only son and grandson in a saree. But my aunt has always been supportive of my clothing choices."
It is only now that his mother and grandmother also help him prepare for his ‘look of the day’ outfits and with his  photoshoots.
From hiding away to slowly owning up to his love for feminine designs, Ranaut has come a long way. In 2020, he walked the ramp for the designer duo Abu Jani-Sandeep Khosla at The Blenders Pride Fashion Tour in Delhi. He says that a call for ramp by India’s leading designers and an all-expense-paid tour is one of the best things that happened to him.
"I couldn't feel my feet. I was flying," he says while remembering the walk.
Not just that, his posts on Instagram also gained popularity with a single appreciation post from his favourite actor Kangana Ranaut. However, even now, the villagers don’t allow their children to go anywhere near him.
"They think I am doing something bad, something wrong and they are scared that their kids will also grow up to be me. They are scared for their future,” he says. But hateful andhomophobiccomments  hardly get to him.
Even though he has minimal knowledge in the technicalities of fashion designing, it does not stop him from going all out with  the colours and silhouettes in his outfits. He feels that every colour has a tone and can harmonise with each other.
"Feminine dresses have so many colours and designs, I feel each of them have a story to tell unlike men's wear that comprises only  t-shirts, shirts, pants, and suits,” he says.
Though the ideas to recreate avant-garde outfits come to him naturally, it’s the preparation that takes time. Generally, he selects the pictures that he thinks he can recreate with cloth pieces, dry leaves, flowers, utensils, leaves, papers available around him and later he puts them together, which can often take him hours.
In one of his photoshoots, while recreating Padukone's look, Neel made his grandmother sit in front of him to use her hair as the replication of the fringes in the actor's dress. He even dresses her along with his little cousin up for his Instagram page. 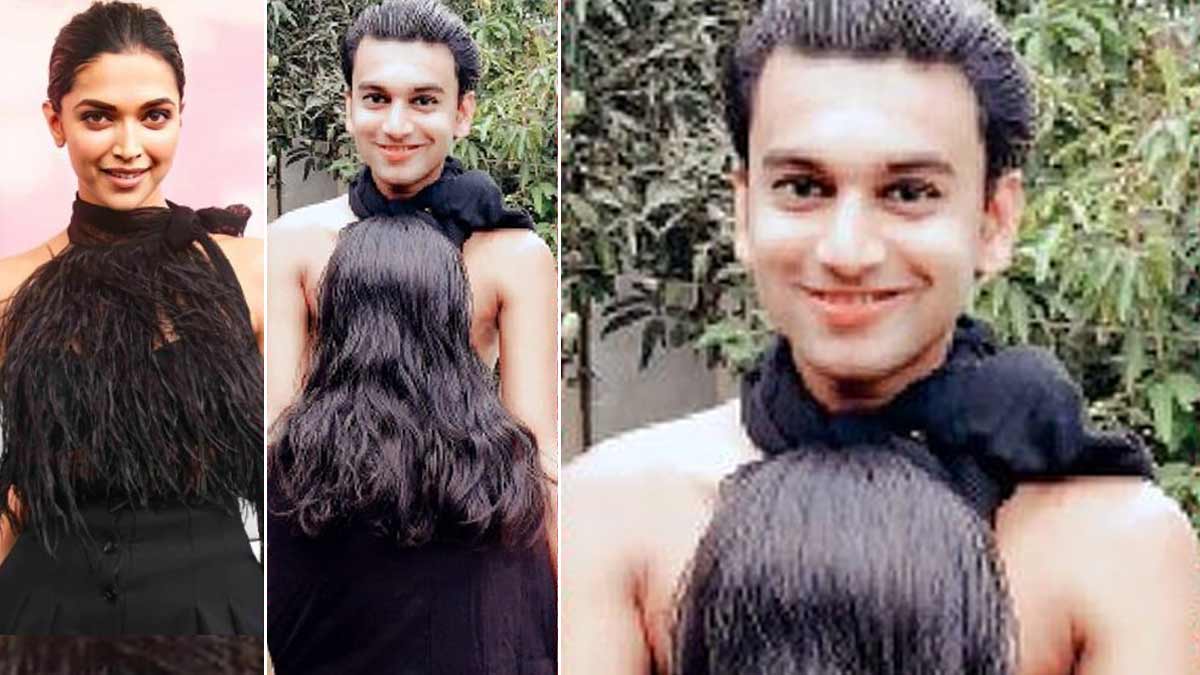 Neel recreated  Padukone's   baggy green outfit with banana leaves and his mother's petticoat,  and it was one of his first viral"Who Wore It Better" posts. 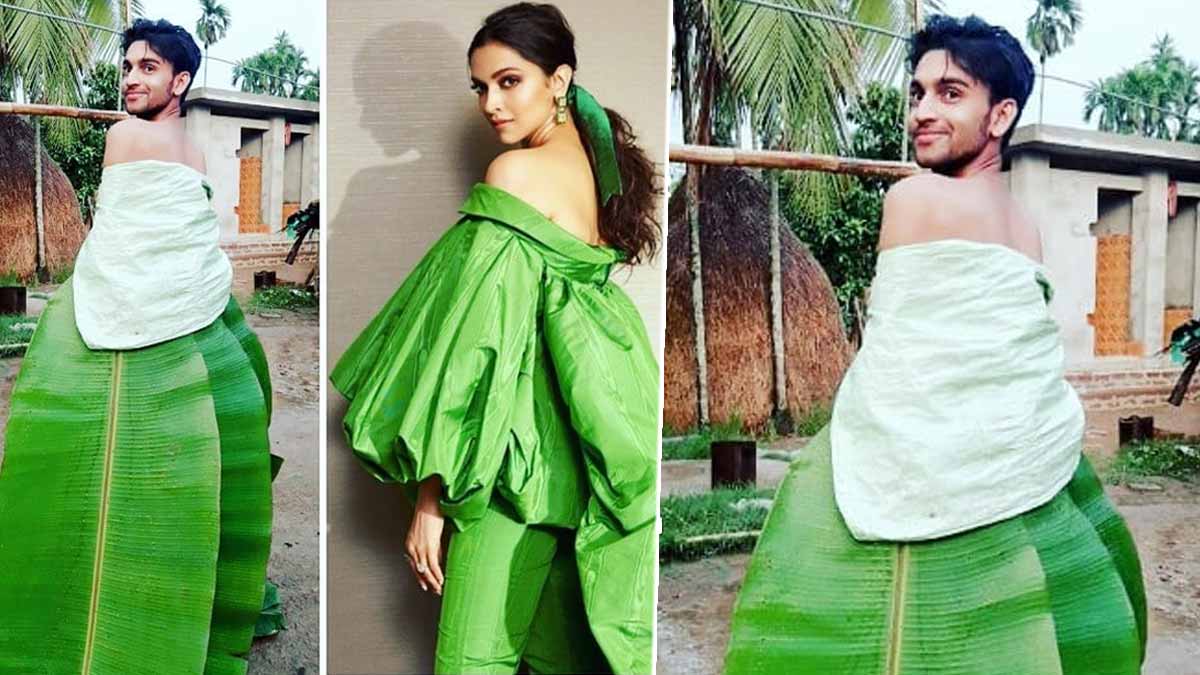 Recently,  he created an original look with raw fish, coconut flowers, and leaves.

Speaking of his aim to make it big in the city of dreams, Mumbai, as a designer, Neel said he cannot even afford the travel expenses to the city from his village. He hasn't received any endorsement offers or sponsors yet. "But I won't stop working towards my passion because there are so many people encouraging me to not stop what I do," he says.
Neel loves watching films especially South Indian films and his favourite actors happen to be Vijay (after his 2020 film Master) and Samantha Akkineni. Neel says he loves women's characters more than that of the men's primarily because of their outfits and also their personas. He thinks that the men's characters in the films usually do not have a wide variety or subtle shades, but rather just focus on action, aggression or the 'hero' kind of roles. On the other hand, female characters have many layers and stories.
If and when he makes it as a designer in the industry, he wishes to design for Bollywood actor Ranveer Singh as he loves the actor's choice of colours and dresses.
Appreciation for Neel has been pouring in from several celebrities including influencer and comedian Kusha Kapila, Ankush Bahuguna, actor Disha Patani, among several others. Here's hoping Neel achieves all his dreams!