Have you seen the size of Tamannah Bhatia's diamond ring? Have you ever received such an expensive ring as a gift? 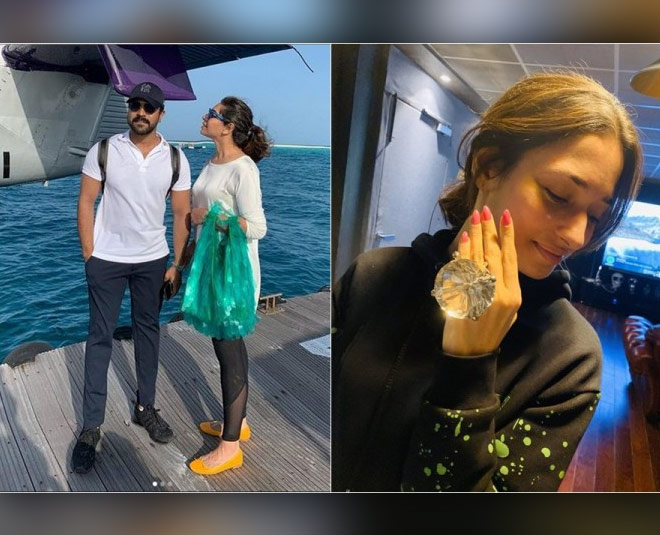 It is so huge that I wonder how she will wear it on her petite fingers! Konidela took to Twitter and shared a pic of Tamanaah showing off the  huge rock. She captioned the image saying: "A gift for the super @tamannaahspeaks from Mrs. Producer Missing u already. Catch up soon. #SyeraaNarashimaReddy."

This bottle opener shall have many memories attached to it . Felt awesome to catch up after so long , waiting to see you soon , miss u more https://t.co/GRuTPeD739

Tamannaah responded on the post saying: "This bottle opener shall have many memories attached to it . Felt awesome to catch up after so long , waiting to see you soon , miss u more."

Besides the rock the other big diamonds in the world are The Oppenheimer Blue Diamond Ring, The Graff Pink, The Cullinan Dream, and the Pink Star.

The Pink Star ring was earlier known as the Steinmetz Pink. The diamond weighs 59.60 carat, and is rated in colour as Fancy Vivid Pink by the Gemological Institute of America. It was mined by De Beers in 1999 in South Africa. It's uncut version weighed 132.5 carat.

This is the second most expensive jewel which has been ever sold at auction, at whopping $57.7 million at Christie’s Geneva in 2016. It is said to have been sourced at the Cullinan mine in South Africa. The name comes from renowned diamantaire Sir Philip Oppenheimer, who gave the ring to his wife Pamela.

Don't Miss: These Diamond Jewellery Pieces Worn By Celebs Are A Must Have

The Graff Pink cost $ $46.2 million which was bought by jeweller Laurence Graff in 2010. According to Graff the emerald-cut Fancy pink gem was “the most fabulous diamond” he’d ever seen. It is set into a platinum ring and was previously owned by American jeweller Harry Winston.